Texan Will Hanna has made a name for himself as a blown alcohol specialist over the last several years, having tuned Top Alcohol Dragsters and Funny Cars to success on both sides of the Atlantic. In addition to his tuning business, Hanna runs InsideTopAlcohol.com, the go-to site for alcohol racing news, tech forums and classifieds. A strong supporter of the alcohol classes, Hanna founded the Pro Sportsman Association, a group of drivers, team owners and other concerned members of the alcohol racing community with the goal of expanding the Top Alcohol brand. Most recently, Will “The Thrill” has worked with a few sportsman racers to help them step up to blown Top Dragster and Top Alcohol Dragster competition. He also plans to soon debut his own TA/FC entry.

DI spoke with Hanna this week to collect his thoughts on the current state of alcohol racing, stepping up to a blown alcohol car, and more.

Q: First off, what are you working on currently?

A: I have a pretty busy plate this year. It’s been kind of a different year for me because here it is going into April and I still haven’t been to any races with my customers other than a test session with my Top Dragster customer. I have a Top Dragster guy that I build engines for down here in Division 4, Dee Kruse. I’m back on-board with Scott McVey’s Top Alcohol Funny Car team. I built a combination for a customer down here, a car owned by Bill Massey and former Top Dragster racer Rob McKinley will drive that. I’m looking forward to that because it’s a converter car running Top Alcohol Dragster so it will be interesting to go out there and apply that combination. Obviously Brandon Booher has done very well with that and shown the potential of that combination. I purchased a car from John Patton last year and I haven’t made any official announcement or anything but I’m trying to put together a car to have my own car out there on-track in 2016 to run a few races.

I’m very blessed to be able to still compete at a high level in a sport I love and to make a living at it. I was blessed to have the opportunity to drive years ago but I really enjoy tuning and the crew chief side of it. When I had the financial opportunities come up to purchase a car and get started building a car, I wanted to have an opportunity to go out there a do a little driving again. I’ve got 10 years of tuning experience under my belt since I drove and tuned in 2006 so I kind of want to drive for 35-year-old Will Hanna rather than 25-year-old Will Hanna.

Q: What are some of the tips you would give to someone looking to step up to a blown car?

A: The only advice you can’t afford is generally free advice. I’m not so much making a plug for paying someone like myself but I know from mistakes I made early on in my career, moving up and trying to do stuff on your own. For example, get your fuel system flowed by somebody. It’s $1500 or $2000 but in the grand scheme of things you save a lot of money by either not blowing parts up or running like crap and having to make a bunch of trips down the race track to figure out what the fuel system wants. Get somebody who has some experience to help you out, whether it’s a fuel system guy or engine builder. Find one guru and listen to their advice. Another mistake a lot of people make is they ask 20 different people different things and try to use bits and pieces of different advice and they get mixed results. It’s best to stick to one guru and get advice from them and stick to their advice.

Q: You’ve worked around several types of cars; screw-blown Top Alcohol Dragsters and Funny Cars and Pro Extreme cars, for example. What are some of the challenges related to going back and forth between the different classes or combinations?

A: Especially if you’re at the same event going back and forth between different combinations you kind of have to reboot when you walk into a new trailer and have to figure out what this particular car, team and class wants. Sometimes whenever I’m going back and forth between a quarter-mile Top Alcohol car to a eighth-mile deal I have to change my mindset because obviously in the eighth-mile the early numbers are everything. You’re not worried about what it’s going to do on the back half of the eighth-mile so you have to change your mindset for how to approach it. On the quarter-mile, you obviously have to keep the whole package in mind.

Weekend to weekend, whenever I’m helping teams, different teams have different routines, different people and different roles and you have to just take a step back and focus on what you’re doing with that particular team. It’s not too bad and it’s actually been pretty helpful for my career to go work with a variety of types of vehicles because certain things are…I wouldn’t say exactly universal but there are things that carry over to all blown alcohol cars and certain things are specific to a combination or type of car. Working with a number of cars has helped me identify those situations and I can better apply myself when I help a customer.

Q: You’ve driven alcohol Funny Cars in the past. How do you think that helps when a tuner or crew chief has driving experience?

A: I think it’s a big help because I can relate to what the driver is going through. I don’t beat up on a driver quite as hard as I would’ve if I wasn’t a driver myself because I do know how challenging it is to do everything that you’re supposed to as a driver in an alcohol car or Pro Mod. It also has helped me teaching new drivers or newcomers in the class. I can give them a heads-up as far as what they’re going to experience, what to look for and how to overcome different situations and bad habits. Really helping everything from what they need to do in the car procedurally to getting the car down the race track to helping them work on their mental game. As a crew chief or consultant, you’re a lot like a coach. You’ve gotta not only call the plays and make everything work the best but you’ve gotta work with the mental aspect of the team and the driver and try to get the most out of them. Different drivers have different buttons that need to be pushed at different times. Sometimes you need to use a little finesse dealing with certain drivers and other drivers it’s just better to tell them to pull their head out of their ass. 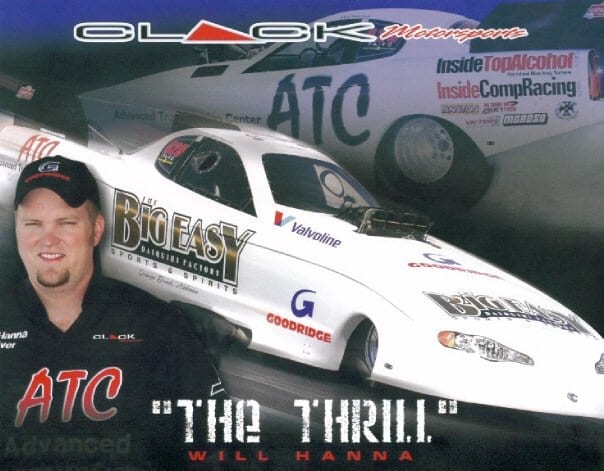 Q: What are your general thoughts on what’s going on in the alcohol world right now, especially after Jonnie Lindberg just ripped off the world record numbers?

A: That was pretty amazing. Amazing conditions and an amazing car, things just came together at the right track with the right conditions. He’s been hauling ass for the last couple years. When he was running those numbers in Europe, everyone thought, ‘is he running more overdrive, a c-blower’; I’ve heard it all. When they (Lindbergs) came over here they definitely backed it up with their performance. They finally figured out how to get that car down the track without shaking. It’s been a world-beater. I’ve had people call me up, ‘what do you think they’re doing?’ Well, if I knew what Jonnie Lindberg was doing to run 5.36 at 272 I damn sure wouldn’t tell you for free. 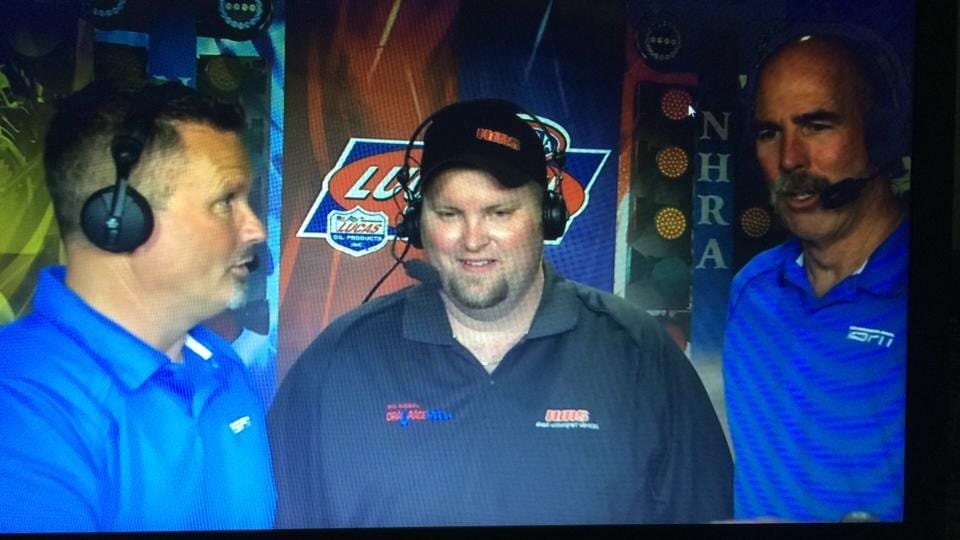 On top of his technical roles, Hanna steps into the announcer’s booth or ESPN2 production trailer from time to time as a guest commentator.

The class seems to be healthy right now. The fuel prices aren’t as bad as they were for the past few years so hopefully we’ll see teams be able to afford more traveling. The economy definitely isn’t great but for the most part most races are seeing full fields. Really the only times you see short fields are the races in the extremes of the country geographically or when you have scheduling conflicts. Some things I’d like to see in a perfect world, everybody would be able to go to all the races that they want to , but sometimes those scheduling conflicts force racers to make choices and at times that leads to short car counts.