If you’ve kept up with NHRA Top Fuel and Funny Car racing over the last four years, you’ve likely seen Tom Patsis’s work in action. As one of the main fabricators at Don Schumacher Racing’s Brownsburg, Ind. headquarters, Patsis has had a hand in more than a few aspects of the megateam’s four Funny Cars and three Top Fuel dragsters. He’s worked for the last four years in the fab shop, building chassis and headers, mounting Funny Car bodies and putting together dragster bodies and canopies. Before that, he was a crew member on DSR’s U.S. Army Pro Stock Motorcycle teams with riders Angelle Sampey, Antron Brown and Matt Smith.

When he isn’t in the shop at DSR, Patsis is busy running Cold Hard Art, a brand of unique sculptures he makes from scrap metal, much of it coming from the race shop. The business started as a simple hobby and has grown since its inception in 2009.

“I used to just make art after work to practice tig welding,” Patsis remembers. “When you’re practicing, if you’re just slapping two pieces of sheet metal together, you don’t really do your best because you’re just going to throw that sheet metal away anyway. So I always try to learn how to weld and do a lot of stuff and make something at the same time that you actually want to keep. You try a little harder that way. It was just practicing, learning how to weld, that’s it. And then it got crazy.”

Crazy is probably an accurate description of Cold Hard Art’s growth over the last few years. Patsis and his brand have built an incredible online following, with over 70,000 Facebook fans and 21,000 instagram followers waiting to see what he builds next. His customers have ranged from race fans to iconic team owners and drivers. We’ve composed this list of just a few of Tom’s projects and the stories behind them and their owners.

Patsis built the chassis and body frame before adding a sheetmetal body.

One of  the first-ever CHA pieces, this car was built for Bodie Brandt, a hardcore racing fan Tom met at the races. Patsis was stuck without welding equipment midway through the building process, so Brandt gave him a brand-new Miller welder and air compressor – this is one of several generous acts that Patsis mentioned. When the car was finished, Bodie and his wife drove to Indianapolis from their Texas home to take delivery of the car. Just months later, Brandt was killed in an oilfield accident at one of his oil derricks.

“He continues to give me stuff without even being here. Everything I build is with that welder, and through the welder and this NAPA Funny Car I took part in a Miller contest and built a reputation with the company, so now I don’t pay for any welding equipment,” Patsis said. 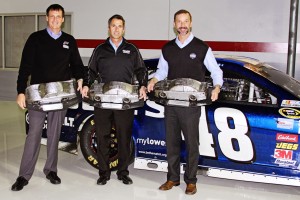 The crew members of the#48 and #88 cars pitched in to buy these cars for Michael Landis, then a Hendrick Motorsports team manager, Steve Letarte, Dale Earnhardt, Jr.’s crew chief, and Chad Knaus, Jimmie Johnson’s crew chief. The two crew chiefs’ cars are hand-etched with their team’s sponsors, while Landis’s is split down the middle, with one half bearing #48 markings and the other half resembling Junior’s #88 car. Patsis made two more #48 cars for a Lowe’s charity event and most recently built a 1:12 scale ’67 Corvette for Rick Hendrick himself. 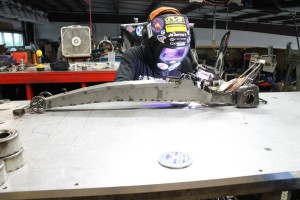 Patsis adds copper flames to the In Motion dragster.

One of CHA’s first commissioned pieces, the in-motion dragster was built for Steve Schiewer of Aerodine Composites, a company that makes carbon fiber parts for a variety of motorsports applications. “He said he wanted it to look like it was going 300 miles per hour so I did this multi-panel design where you can see the panels and the chassis arching. Steve let me borrow the car back for shows and such so I added the copper flames and clearcoated it for him. He’s been one of my supporters since before I had the internet following.”

This cartoon version of a Pro Modified Plymouth Superbird was ordered as a Valentine’s Day gift for NHRA Pro Stock driver Vincent Nobile. “It has exaggerated features, like the injector and the tires, kind of like a Rat Fink style. It’s fat and misshaped but you can tell exactly what it is. The Superbird already looks like it’s driving into the ground so it actually was an easy car to do.”

The fish is made of scrap metal and bolts from the DSR teams.

“Megan Schumacher ordered that for Don’s birthday. She wanted something because he loves fishing, and I wanted to integrate something drag racing. All of the rod bolts say DSR on them. I think it weighs something like 32 pounds and it’s on a carbon base. It’s at his Florida home over the entrance. That was a cool one because it’s for the bossman.”

Patsis used a unique process to make the turbochargers for this project. “I took some 3/8th tubing and heated it up. I had to fill it with sand because when you bend metal too tight it just collapses, shrinks and looks like crap. So I filled it with sand, welded the ends up, and heated and rolled it around a piece of tubing to keep it tight and give it the turbo look. I cut out a circle of sheet metal and used a pair of snips to make it look like the blades.”

Tricky Rickie’s daughter ordered this car to commemorate one of her father’s recent accomplishments.

This IndyCar replica, nickel plated and mounted on a carbon fiber base, was commissioned by IndyCar builder Dallara. One was given to Indiana Governor Mike Pence, and another given to IndyCar driver Ryan Hunter-Reay to recognize the 200th win by a Dallara chassis.

Thanks to new tricks and tools acquired since he built his first Funny Car replica, this version has a smoother body and more accurate features. One of the challenges was building the body to fit the chassis. “I usually build the chassis first and the body second to make sure the injector lines up with the hole and everything looks square and scaled. This was, to me, one of my best drag racing pieces.”

NHRA Pro Stock Motorcycle rider John Hall received this Buell as a gift from his wife. It’s one of three drag bikes built by CHA. 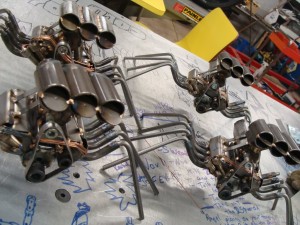 These replicas of nitro-burning Top Fuel motors are some of the best sellers for Patsis. “If I could make a hundred of those per year, I would have every one of them sold. I’ve never been able to keep up with those. I posted one on eBay last year and said it would be the last one I made that year. I usually sell them for around $250. The morning after I posted it, the bid was at $5,500. Someone meant to enter a max bid of $600 but they added an extra zero. We got that fixed and it ended up going for a thousand dollars, which is still stupid-awesome.”