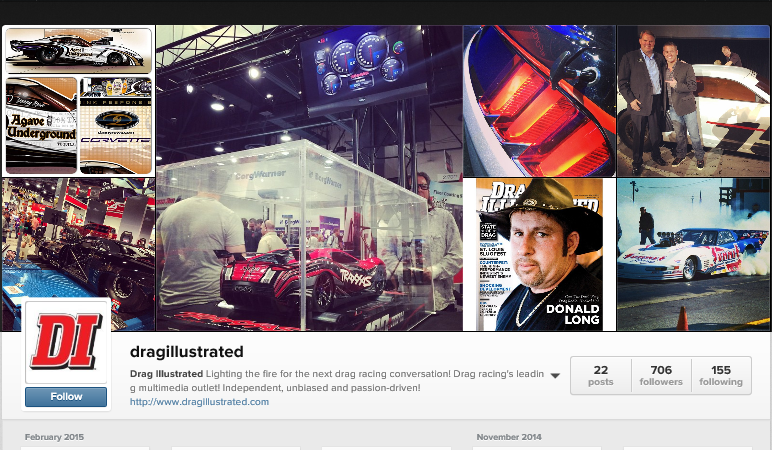 It seems just about everyone has a smartphone now, or at least access to one of the several social networks. Fans have taken to social media to supplement the news and results they receive from standard media outlets, like ESPN2 or NHRA.com. Drivers and teams can interact with fans instantaneously through social media, posting results as they happen or revealing new sponsors or paint schemes before the press release even hits the editor’s inbox. Facebook is the current leader in drag racing social media activity, but picture sharing service Instagram is becoming the next frontier, especially for the younger generation. Maybe you’re on Instagram but you never use it, or you need a reason to sign up. To help you out, we put together this list of some of the NHRA professional drivers and teams who use Instagram to update their fans.

The former Nostalgia Funny Car driver regularly posts behind-the-scenes look at the Dote Racing shop, like this first look at the team’s new look for the NHRA Four-Wide Nationals.

The NAPA Auto Parts driver has been wheeling nitro cars since the mid 90s, so he has plenty of great Throwback Thursday pics in the bank. Also, if there’s a rock star or action sports athlete hanging out at the races, you’ll probably find out about it on Capp’s profile.

Pro Stock fans should enjoy the updates from Gray Motorsports and drivers Shane and Jonathan Gray. They’re one of the few Pro Stock teams with a consistent Instagram feed.

Millican brings his fan-favorite enthusiasm to his Instagram feed, which isn’t limited to shots of his Parts Plus Top Fuel dragster. Clay also posts updates on his son, Dalton, an AMA ATV national champion who now drives the Blue Thunder Monster Jam truck.

Megan takes her followers behind the ropes of the Don Schumacher Racing organization and its seven nitro teams through posts like this video from preseason testing.

DeJoria has one of the largest Instagram followings of the NHRA drivers and it’s easy to see why. Her posts range from standard race car shots to photos of custom motorcycles and handguns made by her husband, Jesse James.

Brittany gave her followers a sneak peek of her new Drag Illustrated cover, set to go online early next week.