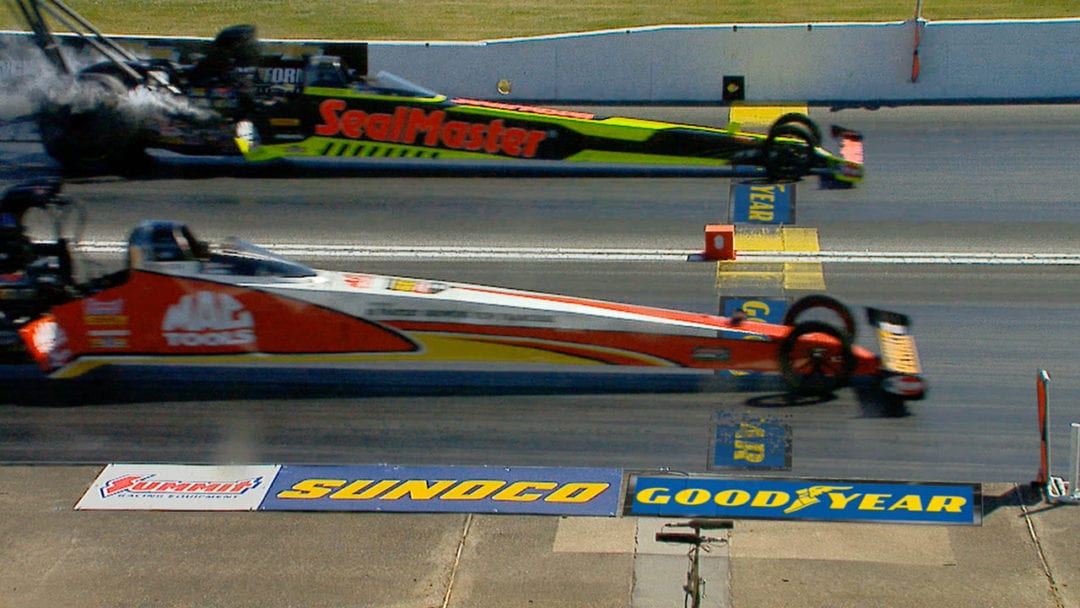 The 35th Annual Summit Racing NHRA Southern Nationals had some high expectations to meet as the National Hot Rod Association converged on Atlanta Dragway for the seventh stop on its 2016 Mello Yello Series tour. The season has been full of tight racing, incredibly low elapsed times and thrilling first-time winners, so anything less in Hotlanta would almost be a disappointment. As it turns out, the teams, the NHRA and the weather all came together to provide the sold-out Atlanta crowd with another exciting event.

The grandstands have cleared out, the big checks have been signed, and the teams are truckin’ back to their shops to perform a quick turnaround before moving on to Topeka for the NHRA Kansas Nationals, May 20-22. It’s time to recap the 35th Annual Summit Racing NHRA Southern Nationals. 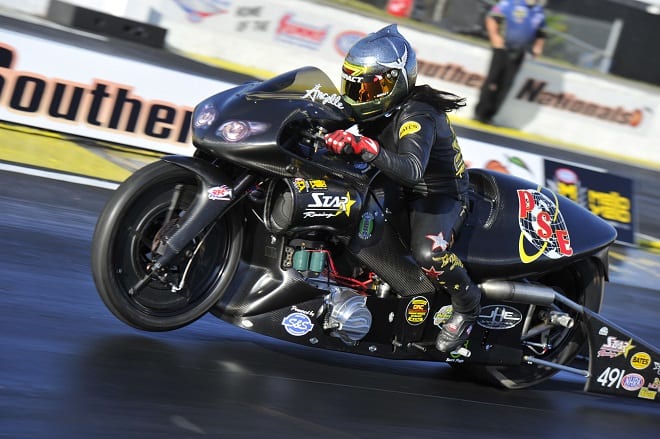 Legendary Pro Stock Motorcycle crew chief and team owner George Bryce always brings out his best stuff when his Star Racing team rolls into Atlanta Dragway for the Southern Nationals. Based in nearby Americus, Georgia, Bryce and the Star team fielded two bikes as they have all season long – one ridden by three-time PSM world champion Angelle Sampey and the other jockeyed by rookie Cory Reed, son of Top Alcohol Funny Car driver Annie Whiteley. Reed qualified for the first time in his young career, but it was Sampey who put the Star Racing/Precision Service Equipment name in the headlines. She qualified number one, had the quickest ET of three of the four qualifying rounds, and raced into the semifinals. Sampey’s first-round ET, 6.799, stood for low ET of the event.

Steven Whiteley might be one of the youngest drivers in the NHRA Pro Mod series that bears the name of his father’s company, J&A Service, but he showed the prowess of a seasoned pro during his second qualifying attempt. Whiteley’s supercharged Cadillac CTS-V got loose as he approached the finish line, but the 22-year-old was ready with the parachutes. His car still shot across the center line and tagged the left wall, but the incident could have been a lot worse without the stability from the ‘chutes. Shane Molinari ran into his own troubles in the left lane, getting on the brakes to avoid Whiteley and ultimately ending up impacting the right wall. Molinari suffered one broken rib and one fractured rib. Whiteley walked away without injury.

When one of the four nitro-fueled Kalitta Motorsports entries turn on the win light in the final round, you can expect a massive, raucous celebration on the starting line as all three of the other teams’ crew members pile on in support of the winning team. The infamous Kalitta “Mosh Pit” was inevitable, as teammates Doug Kalitta and J.R. Todd both advanced to the final round after defeating Don Schumacher Racing drivers Antron Brown and Shawn Langdon, respectively, in the semifinals. In what lead announcer Alan Reinhart so accurately described as “one of the best Top Fuel races in history”, Kalitta used a holeshot to beat Todd in a 3.801-to-3.780 ET final round battle. The margin of victory was 0.0000, the closest Top Fuel race in history. 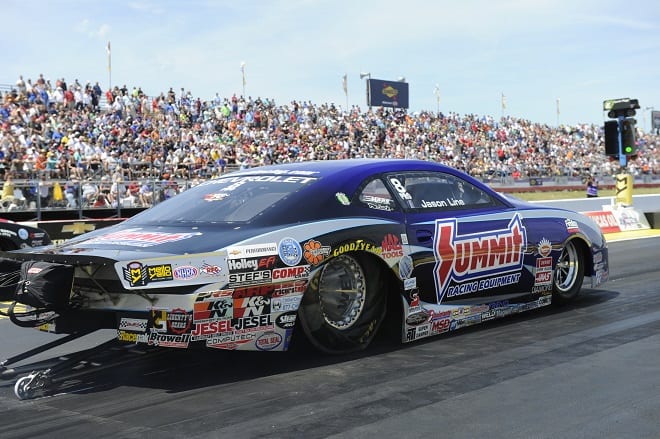 They’ve done it yet again. KB Racing teammates Greg Anderson (6.610), Jason Line (6.615) and Bo Butner (6.618) qualified in the top three positions. Anderson and Line continued their domination of the electronic fuel injection era of Pro Stock as they converged in the final round for the fifth time this season. Line, who has been to all of the final rounds this season, including the K&N Horsepower Challenge in Las Vegas, scored the win on a holeshot. His .015 reaction time and 6.611 elapsed time were too much for Anderson’s .058, 6.593 package. Another incredible performance for the Summit Racing-sponsored drivers, this time at one of their sponsor’s races.

Dan Fletcher is simply one of the best Sportsman racers in drag racing history. His Peak-sponsored ’69 Camaro is the single winningest vehicle in NHRA history with 50 wins in Super Stock. The man-machine duo had never raced in Super Street, so obviously they had never won in Super Street – until today. After outlasting five prior rounds of competition, Fletcher turned on the final round win light against a red-lighting 2014 Southern Nationals champ Ed Pauley. He now owns NHRA national event Wallys from six different Sportsman categories.

Before this weekend, Atlanta Dragway was one of just two tracks on the NHRA tour that hasn’t held a three-second Funny Car run. Considering the performance boom the class has been experiencing since the middle of 2015, it’s no surprise that the track record was quickly reset this weekend. Courtney Force was the first to dip into the threes with her 3.971 et in the first qualifying session. Nine additional sub-four runs were recorded over the course of qualifying, the best of which was number one qualifier Jack Beckman’s 3.939. A three-second blast was required to make it out of first round as all eight round winners were in the threes. Ten more 3.9-second runs were accumulated through the balance of the race, bringing the event total to 28 3.9s. Event winner Matt Hagan’s first-round 3.906 et is the new track record and low et of the event.