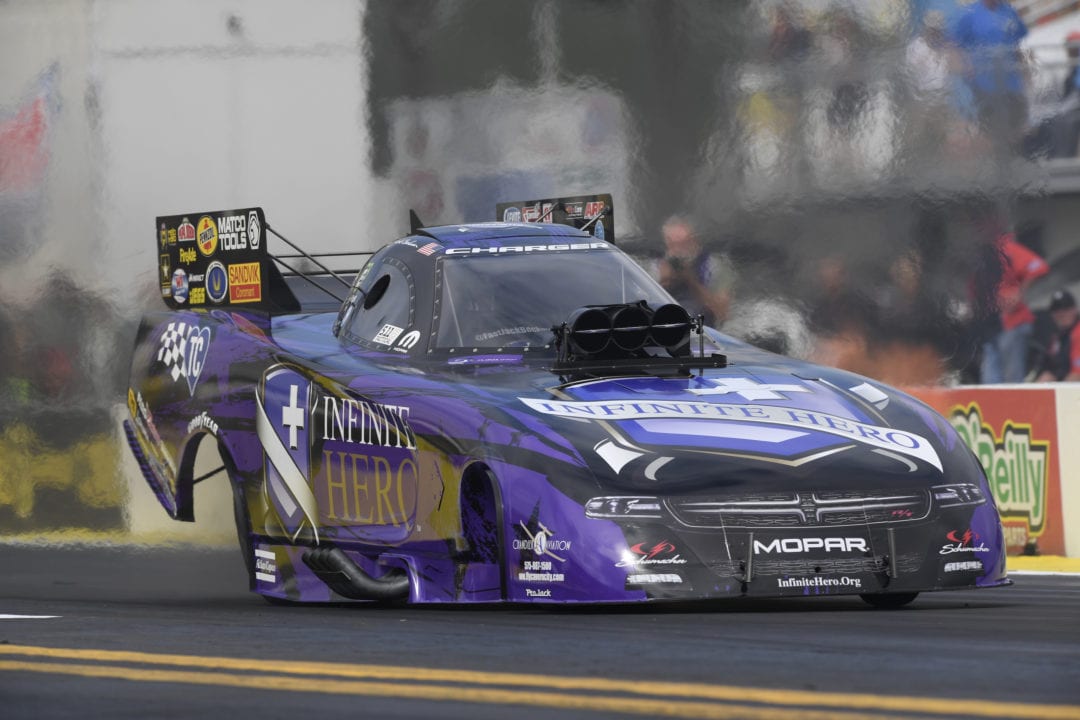 Another wild weekend in Funny Car provided highlight-reel explosions, including a memorable one involving both Matt Hagan and Robert Hight. Jack Beckman wasn’t involved in any of those headlines, but grabbed the most important one of the weekend in the class – his first Gatornationals victory.

Beckman was the No. 1 qualifier went wire to wire at the top, knocking off Hagan in the final round after his near-simultaneous blowup with Hight in the semifinals. It was a wild scene and furthers what’s been an explosive year already in Funny Car, but Beckman ultimately ruled the day, crossing one item off a career to-do list.

“Winning this race was such a bucket-list thing,” Beckman said. “The Gatornationals came on the schedule in 1970, that year was a big year for our sport and it has been at this track ever since and I’ve never gotten close.”

Beckman, who dedicated the win to the late Eric Medlen and his father, John, was stellar, consistent and perhaps most importantly on another crazy weekend in the class, free of carnage. He qualified No. 1 with a 3.911 at 332.18 mph, becoming the third straight No. 1 qualifier to grab the win in Funny Car to open 2018, joining Hagan and Courtney Force. That’s a first in Funny Car history and pushed Beckman to second in points behind his DSR teammate Hagan, who nearly had an incredible recovery after an explosion sent his Funny Car body skyward in the semifinals.

Beckman didn’t have the best view in the house from the Hagan-Hight explosions, but being part of the next pair in line, it certainly provided a show.

But Beckman quickly got back in the right mindset and knocked off Shawn Langdon before beating Hagan in the final round.

It was Beckman’s first career final round at Gainesville, finishing off his standout weekend with his 27th career win.

Crampton Comes Through: It was going to be a storybook win either way. In the end, it was Top Fuel’s Richie Crampton who created a lifelong memory. Crampton’s racing wish list included sharing a winner’s circle celebration with Connie Kalitta, but that chance looked bleak as recent as last year. After success in Top Fuel, Crampton’s team was parked after the 2016 season, a victim of the sometimes-fickle nature of the business side of the sport.

He got the call to join Kalitta Motorsports late last season, doing enough to get a full-time ride with the team in 2018. The now eight-time event winner remained almost perfect in final rounds (8 for 9) in knocking off Shawn Reed, who was making his first final round appearance.

It’s the second straight race a driver made his first appearance in the championship round, but like Scott Palmer, it wasn’t meant to be for Reed. His future looks bright, but this was Crampton’s moment, relishing an opportunity he won’t forget.

“It was one of my most rewarding wins ever,” Crampton said. “It wasn’t all that long ago that I was sitting on the sidelines, reminiscing about when I used to drive a Top Fuel car. So to be back in a car for Connie, Kalitta Air, DHL, Toyota and everyone, I’m just really lucky. So I’m just working hard to try to make sure I deserve to drive for this team. It’s going to be a good year.”

More Success For Gray Family At Gators: It’s become quite a family legacy for the Grays at Gainesville. Johnny Gray started it with his Funny Car win in 2013, and Shane followed with a Pro Stock victory a year ago. Now, Tanner is joining the party after his Pro Stock win on Sunday against Bo Butner.

It erased a sluggish start for the reigning rookie of the year that actually continued in qualifying in Gainesville, as he only qualified No. 11. But things came together in eliminations. Gray actually won his first round of the year in the opening round, and then ended it by knocking off Butner, who continues to keep his own impressive pace as the defending champ and point leader.

But the day belonged to Gray, who is quickly checking off landmark wins before he even turns 20.

“It has definitely been a struggle, but I think it is starting to come around,” Gray said.

New Year, Same Story For Krawiec: Well, this becomes more impressive by the event. Eddie Krawiec, the reigning Pro Stock Motorcycle champion, finished 2017 with one of the more remarkable runs in Countdown history, winning four of the six playoff races and five of the seven final events of the year.

Make that six of eight now after winning the Gators for the third straight year and the sixth time overall. When the level of competition is factored in, the magnitude of that accomplishment grows. Krawiec now has 44 career wins, and some well-deserved confidence.

“Right now, I’m riding with the confidence that no one can beat me,” Krawiec stated. “I have a great motorcycle underneath me and a great team behind me. Anytime a rider or a driver has confidence it just makes them that much better.”

Smith Strikes First in Pro Mod: If this is what we’re going to get in Pro Mod, well, consider us the lucky ones. There were a whopping 35 cars in attendance at Gainesville, and the did not qualify list read like a who’s who of the Pro Mod world.

In the end, it was Rickie Smith who jumped out quickly, grabbing the win in the final round over Mike Janis. It’s an absolutely awesome time to be a Pro Mod fan right now and Gainesville served notice – hello, 5.83 bump! – that 2018 will be a year to remember for the class.

Hector Arana Jr. chased down the last major milestone in NHRA drag racing, becoming the first to reach 200 mph. The weekend didn’t end like he wanted, but he’ll always have some pretty cool history. This has been a mark in the works for years, and now Arana becomes the first to get there.

The aforementioned Hagan and Hight show. They both definitely deserve some credit for helping make sure this didn’t end up any worse.

This is definitely becoming frustrating for John Force. For the third straight race, Force ran into trouble, blowing the body off the car for the third time in as many races. These Funny Car gremlins have been particularly nasty for Force this season, but the iconic driver promised that his team will get it figured out and a solution is coming.

Stevie Fast Keeping Busy! Winning Lights Out 9, racing the NHRA Pro Mod opener in Gainesville, calling out anyone and everyone for Sweet 16 this weekend.

Got the first win of the year today! The boys gave me a great car all day. Feels good to get that monkey off our backs! Thank you to everyone involved! https://t.co/1H3XxNSoQ5 pic.twitter.com/1QpQqPrzN3

What an awesome sight. A massive Saturday crowd. Can’t beat that.

It’s a SELLOUT at @GvilleDragRaces! A big THANK YOU to all of our amazing fans for coming out to the track for the Amalie Motor Oil #Gatornats! pic.twitter.com/bNvSrqJ7iY

What a sight, Part II – an epic burnout from Funny Car’s Cory Lee.

As enticing a visual as it is seeing these bodies fly in the sky with cars going 320 mph, let’s hope this issue gets tamed relatively soon in Funny Car.

This has already been said in this space, but it bears repeating – it’s a wonderful time to for drag racing right now. Gainesville with just a massive crowd all weekend, and a string of good attendance for NHRA to open 2018, with the first four-wide race in Vegas coming.

It’s great to see that – with plenty of outstanding racing to go along with it – but it’s much more than that. There’s great buzz for the PDRA opener. You had a good turnout for the NMCA race in Bradenton a couple of weeks ago, and we all certainly know about the buzz surrounding Donald Long’s events, both last month and coming this weekend.

And that’s just scratching the surface, too. There’s plenty of other tracks and racing organizations off to a great start this season. A lot of momentum right now in the sport and it’s really exciting to see where it goes this summer.