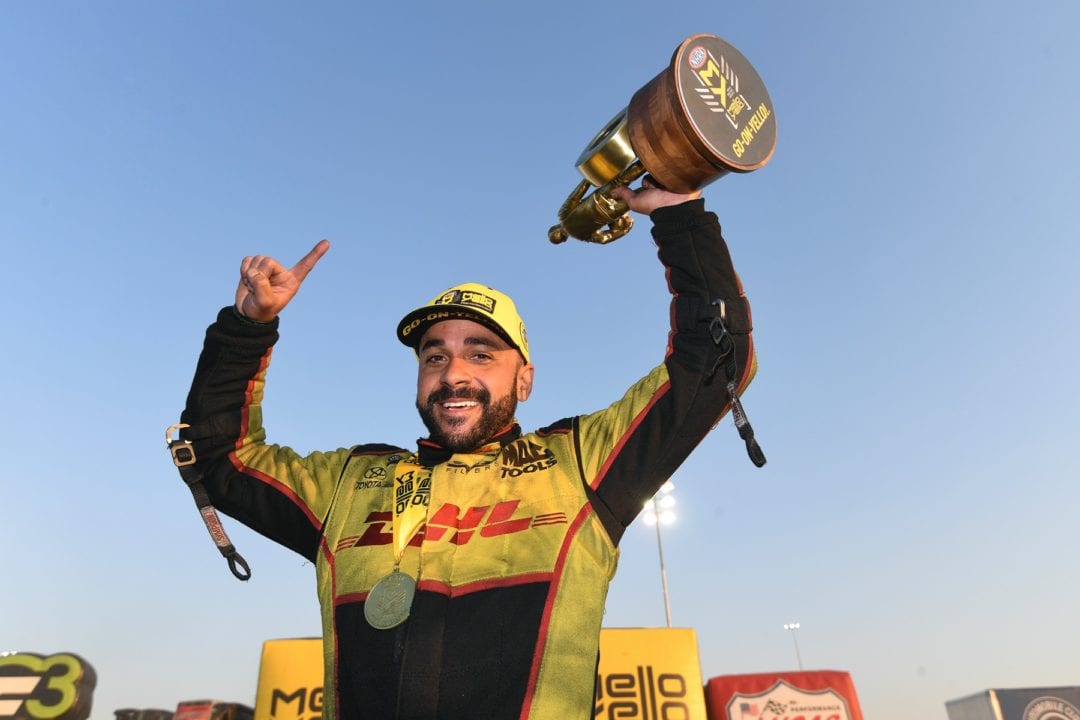 In terms of NHRA finales, you’re going to have a hard time topping Sunday’s Auto Club Finals from Pomona.

Sure, there was “The Run” from Tony Schumacher and obviously a bevy of other memorable races in Pomona to close out a previous year, but there was some incredible history this past Sunday as well.

Never have all four world champions won the final race together, something Steve Torrence, J.R. Todd, Tanner Gray and Matt Smith did this weekend.

I’m not here to declare it the best race in Pomona of all time, but it I’m also not here to say it wasn’t.

You had a winner-take-all race going down to the final round.

You had the youngest champion in NHRA history claiming a title in his final NHRA race.

You had the most dominant run in Countdown to the Championship – and dare I say, NHRA – history on the line.

You had another thrilling title chase come down to Sunday.

It made for great theater, great racing and a great send-off to what has been, well, a great 2018 NHRA season.

For all the “world is falling” talk and discussion about what’s not working, Sunday in Pomona emphasized that there is still so much to enjoy in the sport.

It was a joy to watch Top Fuel’s Steve Torrence claim a championship belt – maybe they got the idea from the World Series of Pro Mod belt – after winning his sixth – SIXTH – straight race in the playoffs.

It was a joy watching J.R. Todd celebrate in his car in the staging lanes as Robert Hight smoked the tires, giving him the Funny Car championship in just his second year in the class.

It was a joy – and a little bittersweet – watching Tanner Gray win a Pro Stock championship before he’s even entered the 20s, something no other driver can claim in NHRA history. 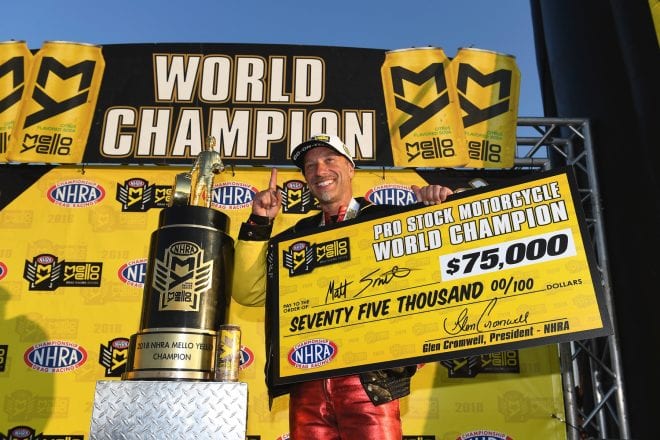 That is a lot of history and it was all taking place during one morning and afternoon.

It was a season full of action, drama and excitement condensed into five pretty darn cool hours of racing and hopefully it helps continue the solid momentum the NHRA built in 2018. There’s plenty more time for talk about that (and we’ll do so later this week), but first let’s celebrate the weekend.

To me, watching Todd pump his fists in the seat of his Funny Car with his helmet on was the coolest moment of the weekend for me. You could practically see the smile on his face through his helmet. There was complete joy, relief and perhaps even disbelief as Todd claimed his first championship.

He clinched it when Hight lost, yet he somehow got refocused moments later to win that round, giving a heartfelt interview in the championship circle.

Of course, he then got refocused three more times on Sunday to claim his sixth victory of the season. If not for Torrence’s perfect run in the Countdown, we would be talking more about how great Todd has been this postseason. He went 20-3 in the Countdown (out of 24 possible rounds), won three races and raced in five finals. That’s rising to the occasion, just like he did in the final round on Sunday when a killer 3.872 showed up on the scoreboard.

“This is what you live your whole life for when you start racing Junior Dragsters at 10 years old,” Todd said. “You hope that you can get to this point in your life and your career, but you never really think it is going to happen. There were definitely some tough times when I got my start with Top Fuel, and I didn’t know that I would ever be back at this point. I have so many people to think, especially the Kalitta group as a whole, they have your back no matter what. We are going to go try and win a race and have two trophies at the end of the weekend.”

TORRENCE NEVER FALTERS: I’ve harped on the job Torrence did this postseason for weeks and deservedly so. After all, the man hasn’t lost a round of racing since Labor Day. That’s incredible.

My only hope is this gets the play this deserves. Winning six straight races in this day and age is phenomenal, and something that probably shouldn’t be possible, especially during the Countdown to the Championship. Yet, Torrence and his team have done it and looked incredible in Pomona even having already wrapped up the championship. But they dipped into the 3.60s over the weekend, Torrence beat Tony Schumacher in his U.S. Army swan song in the final round on a holeshot and broke out the double-guns salute one last time in 2018.

This is ESPYs-type stuff. Give the man his due, sports world. Torrence has earned it.

“To do what we’ve done, we’re the first ones to ever do it,” Torrence said. “We’re going to be in the history books. We wanted to come here and do this, we wanted to set that precedent and we have. It’s all because of the hard work those guys have put in. Nobody can beat us, they can only tie us now. That’s a pretty cool stat to put behind your name.”

A BIRTHDAY NEVER FELT THIS GOOD FOR SMITH: Pro Stock Motorcycle’s Matt Smith probably shouldn’t have been in this position after the start of his year. He didn’t qualify for the season-opening race in Gainesville, and then had his partner slip away in the middle of the night at the next race in Charlotte, leaving Smith high and dry in what was one of the strangest – and that’s putting it lightly – moments of the season.

Yet, Smith turned into a force this summer, winning the $25,000 Pro Bike Battle in Sonoma and getting hot right before the Countdown. From there, he navigated the crazy points carousel in the class to open the Countdown, finally taking the points lead for good after his win in Charlotte.

He said it would take three wins in the Countdown to win a championship and Smith did just that, winning his third playoff race in Pomona to claim his third world title. This one came down to the wire, as Krawiec made him work. But Smith was on a 200-mph mission, eclipsing the mark for the first time during the weekend and then going 200-plus over the final three rounds in an impressive display.

The final wasn’t that close, as Smith went a blistering 6.765 at 201.22 to fly past Krawiec’s 6.812, but the build-up to it was awesome between the two veterans. Smith was icy cool all day, which shouldn’t be surprising after the way his year started.

“Man, we went through a lot (Sunday),” Matt Smith said. “With the air line breaking in the first round and in the second round the transmission broke on us going through the lights. My guys did their job and we fixed all of the stuff that broke and ended up putting up three 200 mph runs today. We are having the time of our life right now though.”

GRAY GOES OUT ON TOP: Tanner Gray’s two-year run in Pro Stock surely wasn’t boring. It was also incredibly successful, as he won 13 races the past two years, the NHRA’s rookie of the year in 2017 and a world championship in 2018.

He clinched it by qualifying and then finished it off with a win in Pomona, displaying his driving talents, poise and skill one last time.

Gray is headed to NASCAR in 2019, but here’s hoping the talented driver will find his way back to drag racing at some point in his undoubtedly bright future.

ICYMI: The NHRA Pro Mod class finished its season in Vegas with Mike Janis earning the championship and Mike Janis Jr. being named crew chief of the year. Jeremy Ray was named the top rookie in the class, capping off an awesome year for the class. If you’re having withdrawals, here’s the NHRA Pro Mod award ceremony to help, at least for an hour.

STEVIE FAST TAKES ORLANDO: Stevie “Fast” Jackson wasn’t done racing in 2018 and had a great weekend at Orlando Speed World Dragway, knocking off Melanie Salemi in the final round of the 25th annual World Street Nationals.

It was a loaded field of standout Pro Mod drivers, but Jackson proved once again he has a penchant for winning these types of races.

DRAG ILLUSTRATED LIVE
Make sure you check out the latest episode of DI Live with Wes Buck! He talks to Mike Janis Jr. and Mel Roth so you know this is a good one.

NITRO MARGARITAS
There are no words for this, which occurred after Todd’s FC world championship. Just sit back and enjoy.

CHAMPIONSHIP MOMENTS
I could watch videos like this for hours. So cool.

MY HOMETOWN
Toyota Racing paid a visit to Lawrenceburg, Ind. with J.R. Todd. This was a cool piece that showed where Todd started in his run to a championship.

How about dem CAPCO Boys?!? pic.twitter.com/uXbEhzhNBc

Congratulations to @chevrolet on capturing the 2018 @NHRA Manufacturers Championship for a record-extending 23rd time! pic.twitter.com/8NUJLoet5K

FROM ONE CHAMP TO ANOTHER

Congrats @JRTodd373 on winning 2018 #nhra Funny Car Championship 🏁
My goal was to hand the crown off better than it was handed to me & to take @nhra to new places.We’ve had a long list of gr8 past #FunnyCar champs & I think we’re in really good hands the next 364 days👌 pic.twitter.com/POKz7GKLTM

We are deeply saddened by the passing of @BIRrace owner Jed Copham. Our thoughts and prayers are with his wife Kristi and the entire Copham family during this difficult time.

PROPS TO THE SPORTSMAN CHAMPIONS AS WELL

THE ICEMAN AND HUNTINGTON BEACH BAD BOY APPEAR IN POMONA
MMA legends Chuck Liddell and Tito Ortiz are fighting for a third time this month, making the rounds at Pomona this weekend.

2018 SEASON HEADS INTO THE SUNSET

The Return Road will be back and better than ever in 2019. We’ll be back in Pomona in eight short weeks and life will be good again. Enjoy the holiday season and I hope you’ve made a few memories at the drag strip this year. There have been plenty of chances to have an incredible time for this season.