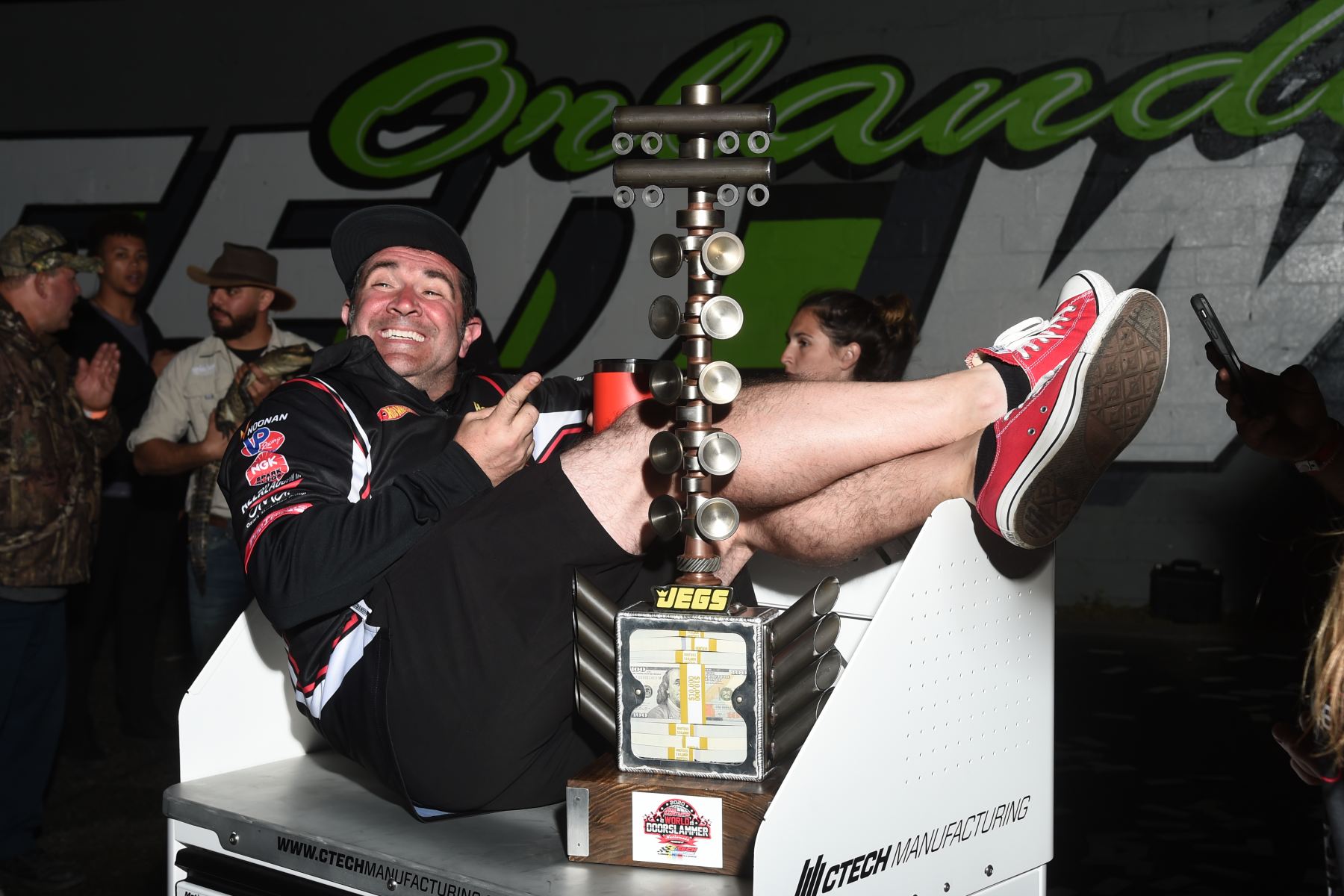 But the excitement factor is even higher for Caruso, who recently debuted a brand-new 2021 Camaro and enlisted 2018 PDRA Pro Boost world champion Tommy D’Aprile as Caruso Family Racing’s driver for the Orlando race.

Caruso won the inaugural World Doorslammer Nationals with the multi-talented Alex Laughlin behind the wheel of the team’s ’69 Camaro. It was a last-minute, one-race deal that brought the duo together, but they made the most of the opportunity. With tuner Lee White calling the shots, Laughlin qualified No. 3 in the 33-car field and went on to take the $50,000 prize.

“It was pretty freakin’ amazing. It was badass,” Caruso said of the victory. “Testing got off to a little bit of a rough start, and if you would’ve asked me on the first day or two if we even stood a chance to qualify, I would’ve been skeptical. But on the last test pass we made a nice pass that made me feel like we were heading in the right direction. It was a pretty amazing race and I’m really looking forward to getting back down there this year.”

“I couldn’t be happier with the car that Rick and Rickie Jones built for us,” Caruso said. “The car came right out of the trailer and went 3.70 at 201 mph with a .930 60-foot time with a real mild tuneup on its first pass down the racetrack. We’re real happy with the potential that new car has.” 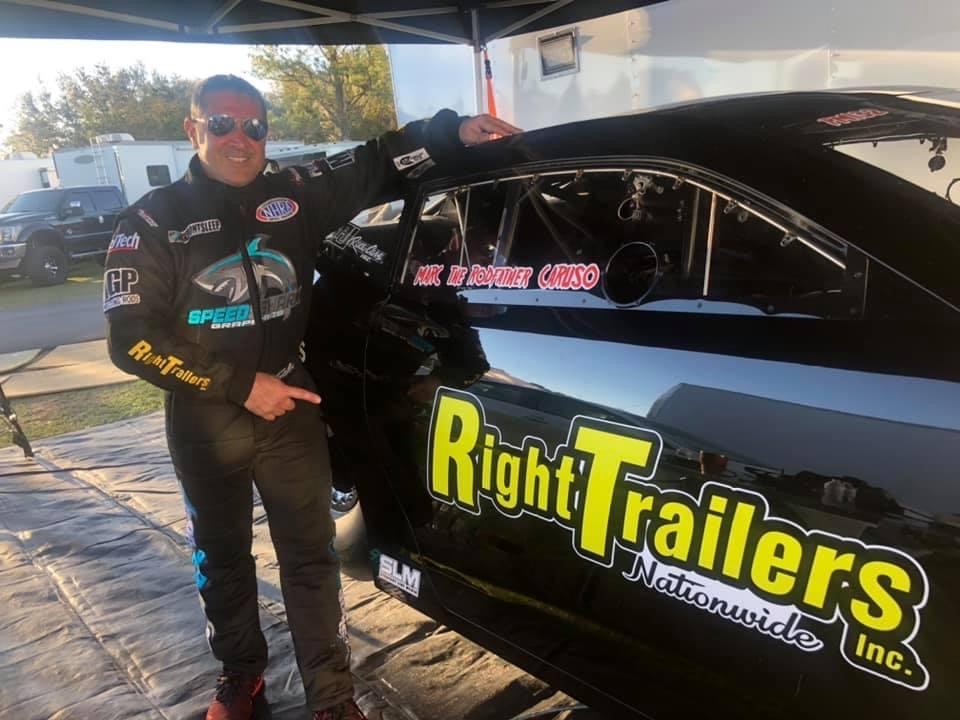 Caruso credits the manufacturers and technical partners for his team’s success not only at Orlando, but also at various NHRA Pro Mod and outlaw Pro Mod races the team attends.

“It’s amazing that we’re able to have the opportunity to mix it up with these guys, thanks to the horsepower from Noonan Engineering and Lee White’s tuning,” Caruso said, “along with all the other components that make it all happen – Mark Micke at M&M Transmission on the converter program, Al Billes on superchargers, FuelTech, Todd and Ty Tutterow at Ty-Drive, Adam Lambert at Precision Racing Suspension, and now Rick and Rickie Jones at RJ Race Cars. You couldn’t ask for better people to have behind you when it comes to Pro Mod racing.”

Caruso’s partnership with D’Aprile started in 2020 when the Pro Modified veteran drove the Caruso Family Racing “Rodfather” Camaro at a handful of races. It made perfect sense for the two to partner up again for the 2021 season, beginning with the World Doorslammer Nationals.

“I don’t think I can say anything about Tommy that hasn’t already been said,” said Caruso, who owns the team with his father, Joe. “Number one, he’s an amazing person. Number two, he’s an amazing driver and he’s proved it time and time again. He has the championships behind him. But above and beyond anything else, we consider Tommy family. That’s a huge piece of it. If I’m not going to be the one behind the wheel, I couldn’t ask for a better person to be in there.” 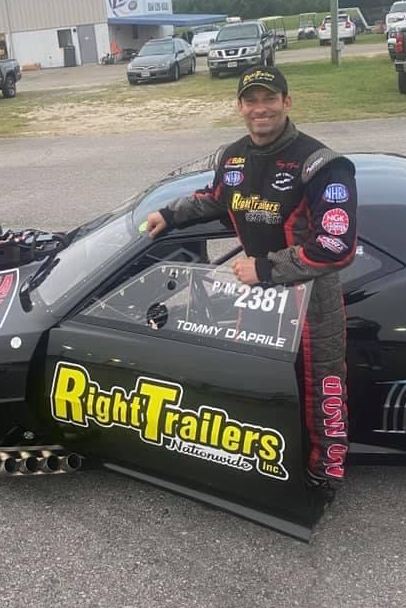 D’Aprile, who also serves as a God Speed Ministry chaplain when he’s at races, similarly feels strongly about the partnership.

“I’m very blessed to be a part of this group,” D’Aprile said. “Marc and Joe are genuine people. Yes, we’re like family. I’ve raced for teams where you really have no camaraderie. You’re just a driver or a team member. This doesn’t feel like that. We’re all family, and win, lose or draw we’re going to be confident and stay together. That family atmosphere is what drag racing is all about and we definitively have that in this group.”

Between the team’s history at Orlando and the addition of the new car that D’Aprile believes will be quicker and faster due in part to its aerodynamic profile, D’Aprile is confident in the group’s ability to repeat last year’s performance.

“I believe that we can win,” D’Aprile said. “I always say we can win any race, but I do believe that. We always exude this quiet confidence. I will never brag, but I will always be confident.”

D’Aprile and Caruso will race with primary backing from Right Trailers, while Nitro Fish Ultimate Gear and Popa Pools have signed on as major associate sponsors.

“Most importantly, I need to thank my father,” Caruso said. “I certainly wouldn’t be able to do this on the level that we do without his help.”