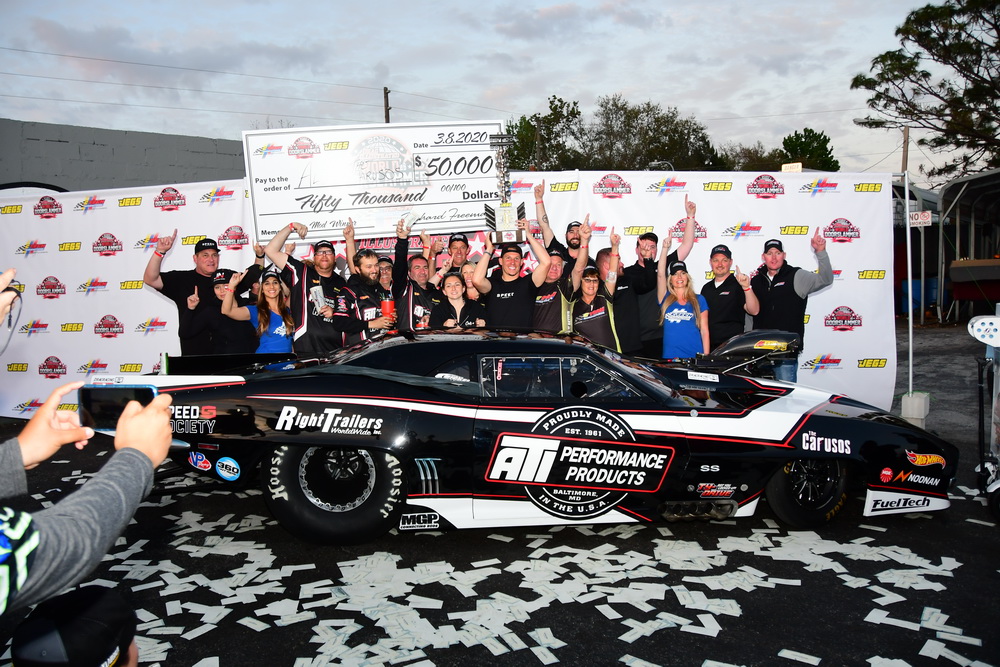 Laughlin hadn’t even sat in the seat of Marc Caruso’s Caruso Family Racing ’69 Camaro before the World Doorslammer Nationals. But after a series of test runs, four rounds of qualifying and four passes in eliminations, Laughlin was cutting consistent reaction times and wheeling the roots-blown ATI Performance entry like a veteran.

Laughlin and Tutterow were both aggressive in the final round. Tutterow left the line first with a .042 light to Laughlin’s .045. It was an even race until Tutterow had to drive through tire shake, ultimately backfiring the supercharger downtrack. Laughlin made a clean pass down the Orlando quarter mile to take the win.

“Man, Lee White is definitely an underestimated crew chief,” Laughlin said. “The dude knows what he’s doing. He deserves all the credit for this. The Carusos have some of the nicest equipment money can buy in the class. Props to them, props to Lee. We just won the first-ever World Doorslammer Nationals and it’s an unbelievable feeling.”

In addition to racing in Pro Mod, Laughlin was also competing for $75,000 in Pro Stock. He qualified No. 9 in Pro Stock before falling to Elite Motorsports teammate Aaron Stanfield in the second round. He was the only driver competing for the double-up in both classes.

While Laughlin didn’t pull off the double-up, he did get to share the winner’s circle with another one of his Elite Motorsports teammates, Jeg Coughlin Jr., who won the $75,000 Pro Stock race.

“What a day,” Laughlin said. “Me and my teammate won both classes. That’s rad – raaaad.”

Complete results from the Drag Illustrated World Doorslammer Nationals presented by CTech Manufacturing are available at DragIllustrated.com and DragRaceCentral.com.