Before the 2021 season, Daryl Stewart was away from drag racing for 25 years. The former South Florida bracket racer found the ideal scenario to stage his return, and it’s played out well as he’s driven his nitrous-fed Chassis Engineering ‘15 Camaro to two wins and a No. 1 qualifier award in PDRA Pro Outlaw 632 competition. He also won the 2020 and 2021 Snowbird Outlaw Nationals at Bradenton Motorsports Park.

Stewart is quick to credit his tuner, Clayton Murphy, the owner of Chassis Engineering, for leading the charge and making his return to racing so successful. The two live just a quarter mile from each other in Jupiter, Florida, so it was an obvious choice for Stewart to partner with Murphy.

Murphy was planning to tune fellow South Floridian John Hall’s brand-new Pro Nitrous Camaro for the 2021 season, but when Hall crashed the car at the PDRA season opener, Murphy’s schedule opened up enough to help Stewart.

“I tell all these guys I’m racing with that I got lucky just because of Clayton being in the right place and John not racing this year,” Stewart says. “It was the perfect opportunity for him to help me. It’s all been working out. It’s definitely Clayton and Chris [Boudreau] and Johnny [Smith]. It’s the only reason why we’re here like this. I can remember how to drive a little bit, but that’s it.”

Stewart isn’t giving himself enough credit, as he’s been one of the most consistently quick leavers in the class. He won on a holeshot in the Summer Shootout final round to earn his second win, the first coming just a couple races earlier at Norwalk.

“It makes it easy when you have somebody who you know can drive and can step up whenever he needs to and will give you good feedback,” Murphy says of Stewart’s driving. “There were some growing pains in that respect just because he hadn’t driven in 25 years, but he came right back to it. Within the first four laps going down the racetrack he was doing a burnout nice and easy like he used to. I think we were in the 4.20s literally the first test session, which was way better than I thought we would ever be.”

Stewart and Murphy first started racing together in 1989 when Stewart bought his first brand-new door car and had Murphy put it together for him. When Stewart decided to return from his quarter-century hiatus, the two linked back up again so Murphy and his Chassis Engineering team could convert Stewart’s current car, Todd Hoerner’s former Mountain Motor Pro Stock car, over to Outlaw 632 trim. 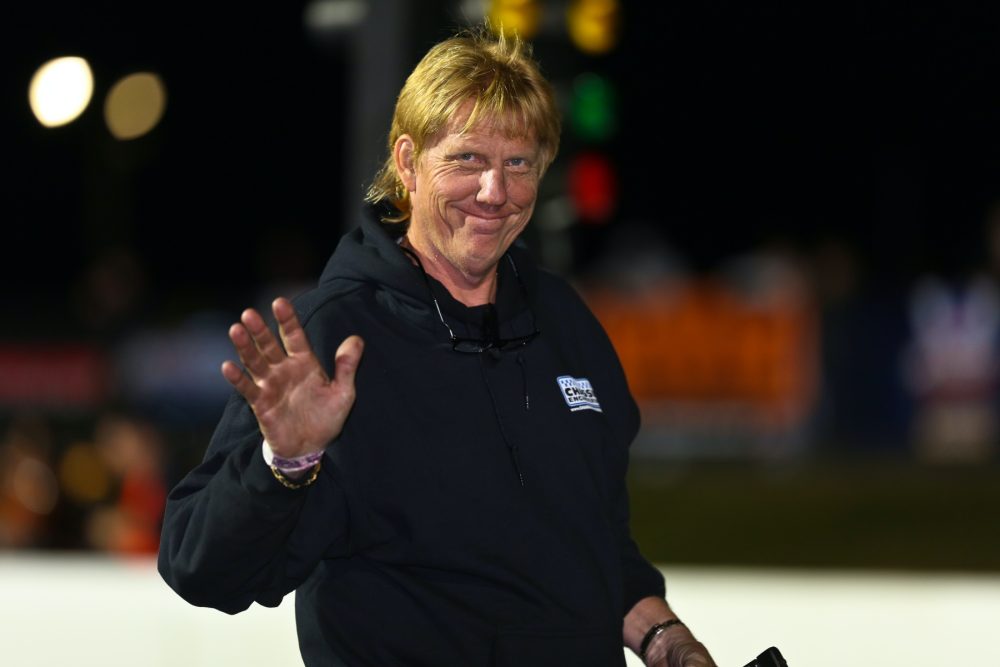 “After [putting together Stewart’s first car] we just started racing together and literally hit it off,” Murphy says. “We both had the same goals. We’re both extremely competitive but very humble. it makes it easy when you can be friends and go to a race and have fun. Just 100 percent have fun. We cut up and laugh and joke. If he does something wrong, we ride him all day long. If we do something wrong, he does the same to us. It’s a lot of fun.”

Just as the 2021 season was a momentous return for Stewart, it was also a meaningful recovery for Murphy, who sat out part of the 2020 season to go to rehab for prescription drug abuse.

“That was right when we got the car and right when we started putting the motor program together,” Murphy says. “That took a lot for me to get through. Thank God I did. Mentally, physically, everything, I’m 100 percent better than I was. Daryl didn’t jump ship and grab somebody else to run the program, he sat out that year and just waited for me to get better. We’ve been rolling ever since.

“I have nothing to hide at this point,” Murphy asserts. “It started with a pain-related issue and it got out of control after eight years of taking pain meds and listening to doctors and all kinds of other crap. It got to a point that I was out of control and there’s a lot of things that had happened in the previous couple of years that I never dealt with. It sucked to go through, but it was the best thing that ever happened to me. Having great friends, obviously my wife [Kelley] and my mom and everyone else behind me, kind of pushing me along – not just babying me, but pushing me along to do the right thing and do good – it made it easier.”

Going through rehab and taking a step back from racing made Murphy realize he was a bit burnt out. He’s learned to set limits on his workload, while going racing with his longtime friend has refueled his passion for racing.

“My passion is racing and my job is the same,” Murphy says. “To do your hobby seven days a week sometimes kind of sucks. But it’s fun now, where before it was kind of a job. I was on the road 40 weeks a year and it was just getting out of control. Stepping back from that and having someone like [Stewart] just basically say, ‘Whatever you want to do. If you want to go race, we’ll go race. If you don’t, we don’t. You control everything we do as far as that stuff goes.’ That’s been a blessing.”

Murphy’s recovery has also paid dividends at Chassis Engineering, which celebrated its 40th anniversary in 2021.

“Business-wise, we’re doing 100 times better,” Murphy says. “My wife got involved in the business and that’s helped tremendously. I’m going to say she still allows me to go racing, but it’s not like that. I can understand why she wouldn’t want me to, but she also knows I’m with guys that are on the same page and basically keep me in check.”

Stewart gave Murphy complete control over the race program, from choosing manufacturers to the crew members who join Stewart and Murphy at the races.

“It makes it to where you want to do this,” Murphy says. “You’re not forced into anything. If you want to use this part, you just grab it and go do it. Again, [Stewart] has a lot of input. It’s not like he just gives me the keys and walks away. It’s nice because it’s all of us – Chris, Johnny, everybody – is on the same program: have fun, then win. We’ve sucked some this year and we’ve done good some this year. It’s always the same attitude on the flight home.”

Always humble, Murphy is quick to deflect credit for the team’s immediate success.

“It’s not a me group, it’s an us group,” Murphy adds. “That’s the way I like it. They label me the crew chief, but I don’t feel that way. It’s just a bunch of guys out here racing and having fun. I think it’s easier that way. It’s easier to blame a guy if you have a crew chief. But you have to take it as a team. At some races, the driver won rounds for us all day long because I sucked. But when he sucked, we would pull through. It has to work this way.”

Along with Stewart, Boudreau and Smith, Murphy praises the team’s manufacturer partners like Daryl Hameetman at Hameetman Racing Engines and Greg Samuel at FTI Performance for providing him with feedback, advice, and choice products.

“I think we accomplished a lot this year, coming out without really any runs on the car,” Murphy says. “New car, new combination, new engine builder. Daryl had built some 632 stuff for his own car. I raced with him a couple years ago trying to help their program out. I knew how his stuff ran. He’s very humble just like us and he has a passion for making stuff work. The same thing with Greg at FTI. I’ve never met a transmission guy that worked harder than he does.”

As a longtime employee and now owner of Chassis Engineering, Murphy uses an analytical, engineer’s approach to racing, whether it’s developing chassis components or making them all work as a part of the car. He says Hameetman and Samuel share that approach as well, as they’re known to experiment and try different ideas that others might write off.

“That’s the thing that I like: finding those little things that nobody else has,” Murphy says. “And with a single-jet deal, there’s not much more you can do. You either make power and harness it or you don’t. Chassis wise, you have to make the car extremely efficient.”

After the triumphs of the 2021 season, Stewart and Murphy are both charged up for the new season. They plan to test and compete in Florida’s “winter series” races to get geared up for another season in the increasingly competitive PDRA class that will be known as Pro 632 in 2022. Stewart’s racing operation will also grow, as his sons, Blake and Colin, will join the team.

“We’re looking forward to next year for sure,” Stewart says. “My son [Blake] is going to start to race Top Sportsman next year. We’ll get a little bit bigger trailer so we can fit two cars in there. It will be a lot of fun. We’re going to let them both drive a little bit at first, but Colin is still in college so he has to get done with that.”

Murphy is determined to put Stewart in championship contention yet again. This past season, Stewart finished second behind two-time world champion Wes Distefano and the $hameless Racing team. A runner-up in the championship chase and a pile of trophies is enough of an accomplishment, but it’s the backstory behind the season that makes it that much more meaningful.

“We accomplished a lot,” Murphy admits. “We won two races here, we were in the semis six times, we qualified in the top 3 every race. Just having that accomplishment for me is almost like redemption that I know I can still make these programs and these cars work. With all the shit that I went through – it was all self-inflicted – but all the stuff I went through to get back, my brain still works, which is awesome.”