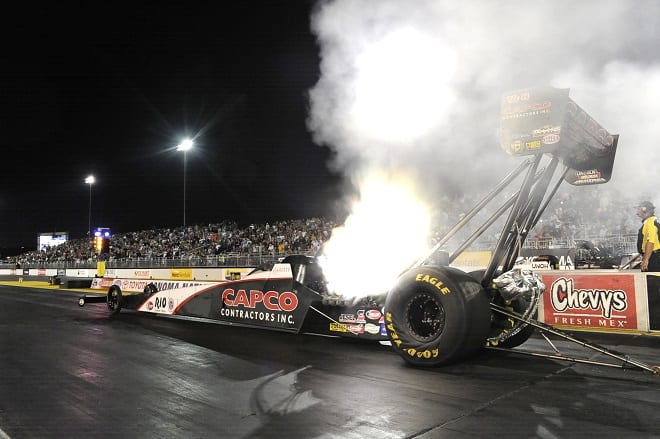 In becoming just the fifth driver in the 1,000-foot era of NHRA Championship Drag Racing to eclipse the 3.70-second barrier, Steve Torrence set the national record with a monumental 3.671-second blast in front of a sellout crowd during Friday night qualifying at the 29th annual Toyota NHRA Sonoma Nationals.

“You gotta really hit the nail on the head to make a run like that,” says Torrence of the record-setting effort produced by his Capco Contractors/Rio Ammunition Dragster tuned by Richard Hogan and Alan Johnson, which included a .812-second sixty-foot and 2.937-second, 291.70mph eighth-mile clocking.

“When we made it to half-track I did the best I could to keep it in the groove. When I looked up going through the lights and pulled the ‘chutes and saw that sixty-something come on the board, I just started hollering because I knew it was fast. It was the quickest I’ve ever been. I jumped out of the car and I don’t even know what I said down there.”

Only one driver has gone quicker and that is Shawn Langdon who ran 3.662 on August 23rd, 2015 in Brainerd, but was unable to provide a back-up run within one percent that would have secured the record, a step no longer required for certification.