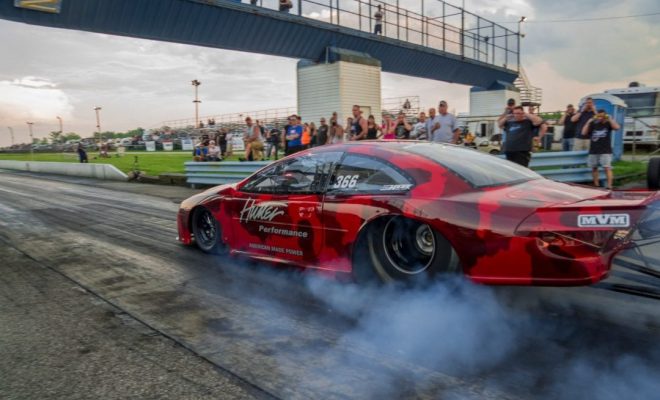 When 2016 Asphalt Wars Door Car class champion Matt Hutter started racing go-karts at a young age, he never imagined himself behind the wheel of a twin-turbocharged Pro Mod covering the eighth mile in under three seconds at nearly 200 mph. Instead, he dreamed of making victory laps around the superspeedways of the South as a NASCAR wheelman. Hutter has experienced a taste of both worlds, but today he’s focused purely on his straight-line racing endeavors as the driver of his family’s Hutter Performance Dodge Stratus.

Hutter’s racing career started with late-model racing at his native northern Ohio’s short circle tracks, competing in regional series that opened doors with NASCAR teams in the south. James Finch of Phoenix Racing hired him to drive one of his ARCA entries on the big speedways before moving up to a limited NASCAR Busch Series schedule. Eventually, the driving opportunities dried up and Hutter was tired of moving around the southeast to work as a fabricator and over-the-wall tire changer in between driving gigs, so he moved back to Chardon, Ohio to work with the expanding family business.

Since Hutter’s father, Ron, was building massively successful engines for mountain-motor Pro Stock team owner Billy Dingman, the Hutters decided to build their first drag car upon Matt’s return. They started with a bracket car and moved up to a faster bracket car before reaching that car’s limitations. Then came the opportunity to buy their current car, a former Erica Enders wind tunnel test car built by Jerry Haas. A nitrous-fed small block was dropped between the frame rails, but the combination proved to be costly and ill-tempered, so Matt coaxed his father into switching to turbochargers for the 2016 season.

“We tried to run nitrous up until this year, and every now and then there were little hits of success, but overall a lot of inconsistency,” Hutter admitted. “We took a step back at the end of 2015 and looked at our options and decided that turbos would be the way to go. It was a little bit of a learning curve, but about halfway through the season we hit on some stuff in testing.” 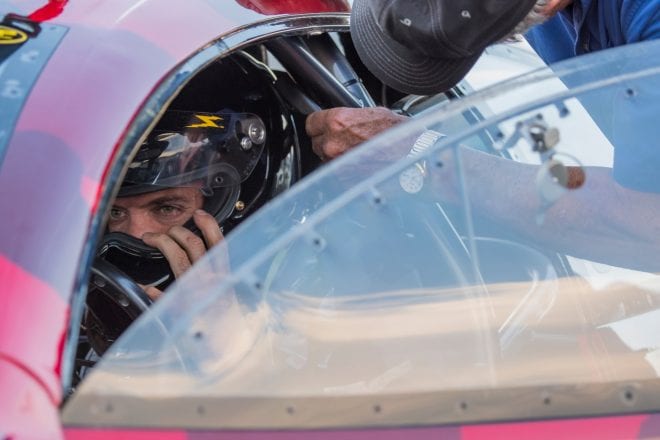 Whatever it was that Hutter found during testing worked well for the rest of the season. “We won two races, set the ET mark for a door car in the series with a 3.91 and had to split one final. We were up at Empire Dragway and the program just ran late and they ended up splitting it. But we had lane choice going into the final there. So of course, being a racer, you’d like to think that would have been your third win,” Hutter laughed.

Hutter is quick to credit the racer mentality he and his father developed in the circle track racing world, a Talladega Nights-esque “first or last” attitude that anything less than first place isn’t good enough, for being a driving force behind the team’s championship finish.

“That’s just the way we race,” said Hutter, who admits his desire to win caused his fair share of wrecks during his oval racing days. “And not to say everybody isn’t like this but we’re just always looking for an edge, always looking for wherever we can nitpick or pick up the next little bit of power or get the car a little bit lighter or how we can go a little bit faster. It’s cool because [Asphalt Wars] is a no-rules deal. So as creative as you can get or as hard as you want to work, you can see payoff for it.” 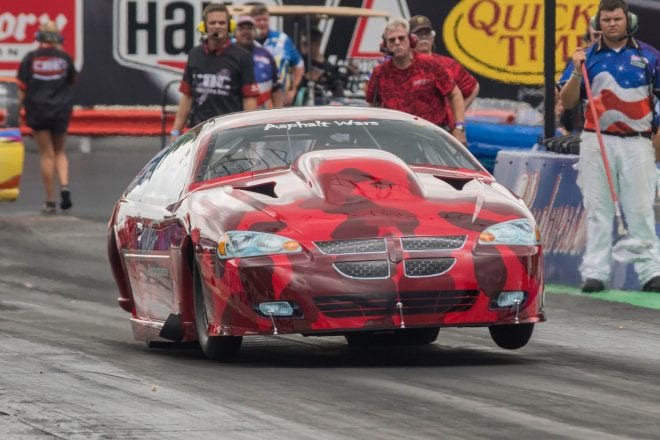 Hard work and creativity are two concepts that are certainly familiar to Hutter and his team, made up of crew chief and owner Ron Hutter, Rich Bertleff, Doc Holliday, and EFI technical advisor Trevor Hutter. With Asphalt Wars’ primary track, Thompson Raceway Park, just down the road from Hutter’s shop, he estimates he made around five test passes nearly every week for the last few seasons. The elder Hutter would keep the R&D flowing away from the track, spending countless nights on the dyno to make the nitrous combination work, with little to no avail. Upon switching to a pair of 80-millimeter Comp Turbo oil-less turbochargers, the duo quickly found themselves reaping the rewards of their efforts.

“All the nitpicking on making the car light and all the figuring out how to get the car to 60-foot and figuring this out and figuring that out, now that we’ve got the motor combination pretty well nailed down where it should be, all of that other stuff is coming to the surface. It’s kind of like all the results of that work are all showing up at once. It’s almost like we came out of nowhere, but really we’ve been working at it a long time.”

When all that performance made itself known in the form of a very promising debut weekend with the turbocharged combo, inevitably the naysayers chimed in. “In the space of a week, we went from being those crazy guys that don’t know you need a huge motor in a Pro Mod to being those cheating guys with the car that’s too light,” Hutter chuckles.

With his first Asphalt Wars season championship sealed up, Hutter’s focus is set firmly on defending his title, but also making the step up to the Professional Drag Racers Association’s Pro Boost class. He’s upgraded to 88-millimeter turbos to feed the 434-cubic-inch motor, built by Hutter Racing Engines out of a CFE block and cylinder heads. The ultra-light, potent Stratus will follow the full to-be-announced Asphalt Wars schedule, as well as a few of the closer PDRA races.

“Asphalt Wars is just a good series for us,” Hutter confirms. “Even the furthest race for us is Empire Dragway. You can get up early, go race and come home all in the same day. As far as PDRA, I don’t know what to expect. We’ve had the car running pretty good in Asphalt Wars. During testing in the fall, we went a 3.88 out at Thompson, and I think that puts us on the fringe of making a Pro Boost show. But I feel like if you put the car on a track that’s prepped like those PDRA tracks are prepped and throw some more power to it, maybe it’ll go faster. That’s what you would hope, anyway. I don’t have a lot of expectations other than to know that we’ve run good in where we’re at and feel like we’ve run good enough to be ready to try the next thing.”

This story originally appeared in Drag Illustrated Issue No. 117, the Champions Issue, in January of 2017.