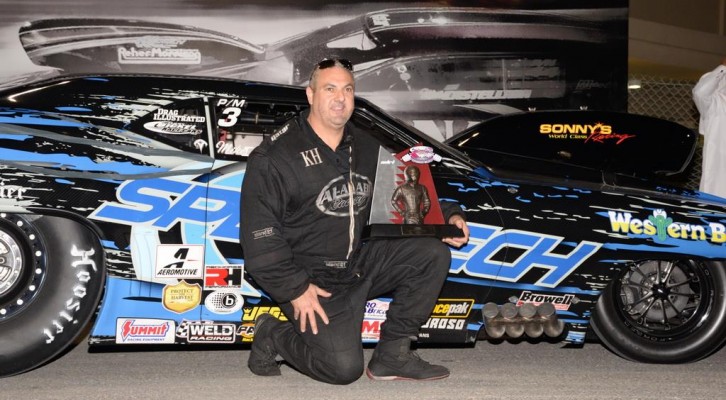 Mike Castellana and the Speedtech team won the first of three races in the Arabian Drag Racing League in Qatar over the weekend. Castellana beat Mahana Al Naemi in the final round with a 3.799 E.T. to his losing 3.855. To cap of the successful race, Castellana also set the record in qualifying with a 3.77 E.T., as well as established himself as the points leader, with a brand-new EFI-equipped 903ci engine from Sonny’s Racing Engines.

While the crew celebrated the win, they also mourned the loss of a long-time friend.

“Our win was a bitter sweet victory,” said Castellana. “As most all of you know by now, our friend and long-time crew member, Steve ‘Wormy’ Helkin, passed away on January 31st. ‘Wormy’ has been a true asset to this team for many years, and he will be deeply missed.”

Helkin recently passed away following an accident and a month-long stay in the hospital. His death is being felt by the entire racing community, with prayers and words of condolences going out to his family. Helkin was a big presence at Awesome Motorsports, Castellana’s company with Shannon Jenkins.

“There are two races left in the Arabian Drag Racing League, and we are going to do everything we can to win those two races and the championship, in ‘Wormy’s’ memory.” Castellana went on to add, “Our team’s goal for 2015 and beyond is to win for ‘Wormy.’ His passion was drag racing, the race track was his home, and we all were his family.”