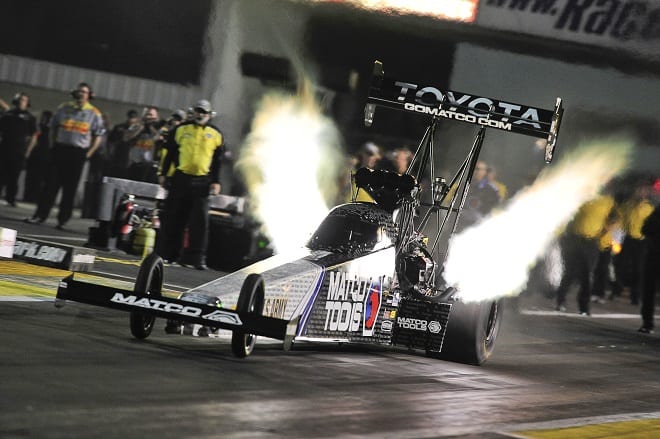 Antron Brown raced to the qualifying lead in Top Fuel Friday at the Toyota NHRA Summernationals in Englishtown, N.J.

Brown, the 2012 Top Fuel world champ and current series points leader, powered to a 3.725-second pass at 317.57 mph in his Matco Tools dragster to earn the qualifying lead. He has two victories and two No. 1 qualifiers so far this season. Brown, a local favorite as a native of nearby Chesterfield, has 39 No. 1 qualifiers in his career.

“This track is so good it can actually yield better numbers,” Brown said. “We were going for it. Once the car took off, I felt my car jump up on the tire and I was like, ‘Oh, she’s on one.’ I looked at the scoreboard and we nipped a 72. That thing was running hard. It’s going to be a good weekend.”

Brown is coming off two consecutive No. 1 qualifiers at Atlanta and Topeka, Kan. He raced to victory in Charlotte, N.C. and Atlanta in March and May, respectively. Brown has never won in Englishtown.

J.R. Todd qualified second with a 3.727 at 319.52 in his Red Line Oil/Kalitta Air dragster. Defending and eight-time world champion, Tony Schumacher, qualified third with a 3.736 at 323.66 in his U.S. Army dragster. Leah Pritchett raced her Dote Racing/Gumout dragster to a 3.736 at 321.04 and sits third overall. Shawn Langdon and Brittany Force are fourth and fifth, respectively.

In Funny Car, Pedregon recorded a performance of 3.967 at 306.53 at the controls of his Snap-on Tools Toyota Camry, earning him the provisional top position. Pedregon has 59 career No. 1 qualifiers and raced to victory in Englishtown last year after qualifying first. He has five career No. 1 qualifying positions and three career victories at Raceway Park. 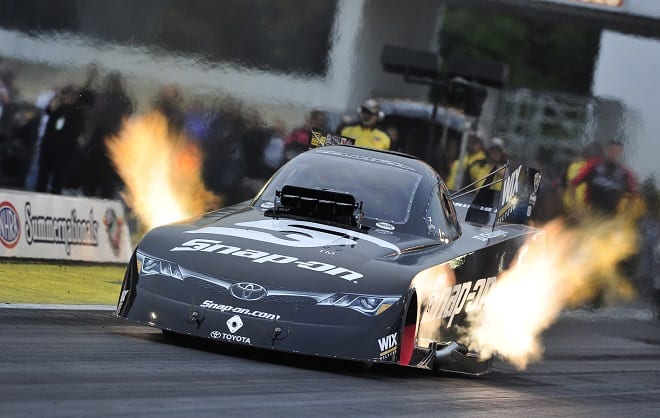 “We really raced the track,” Pedregon said. “It’s easy to get caught up and try to run fast. We’ve tried that before but usually you’ve got to keep your emotions out of it and just be smart, race the track and really not pay attention to what the other guys are running. A 3.96 is what came up on the board and it was a great run.”

Chad Head qualified second by posting a 3.996 at 308.78 in his Head Racing Toyota Camry. Last year’s Englishtown runner-up, Del Worsham, is third with a 3.998 at 314.53 in his DHL Camry and is followed by defending world champ Matt Hagan in fourth with a 3.999, 315.05 in his Rocky Boots/Mopar Express Lane Dodge Charger R/T. Tommy Johnson Jr. is fifth and Courtney Force and Jack Beckman are sixth and seventh, respectively.

Reigning Pro Stock world champion Enders leads Pro Stock qualifying with a 6.508 at 213.06 in her Racing in Red Chevy Camaro. Enders, the Pro Stock points leader, has 15 No. 1 qualifiers in her career and three this season. She has won three of the last four races. 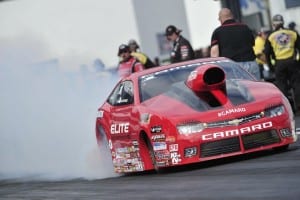 “The first round we were way too conservative so we went out there [second round] and kind of just got after it,” Enders said. “I knew when I unclutched it that I was on a really good run. It just speaks volumes of my crew chiefs and what they’re capable of. We’re excited about tomorrow and just proud of what we accomplished today.”

Greg Anderson, the 2014 event runner-up, sits second after racing his Summit Racing Equipment Chevy Camaro to a 6.511 at 213.43. Anderson has a category-leading five victories at Raceway Park and one victory in four final round appearances so far this season. Anderson’s teammate, Jason Line, pushed his Summit Racing Camaro to the third provisional qualifier, while Larry Morgan sits fourth.

Arana Jr. raced to the qualifying lead in Pro Stock Motorcycle with a 6.849 at 196.53 on his Lucas Oil Buell. He has 17 career No. 1 qualifying positions and was the No. 1 qualifier at the NHRA Four-Wide Nationals in Charlotte, N.C. in March. Arana Jr. has nine career victories, but hasn’t made a final round appearance this season. 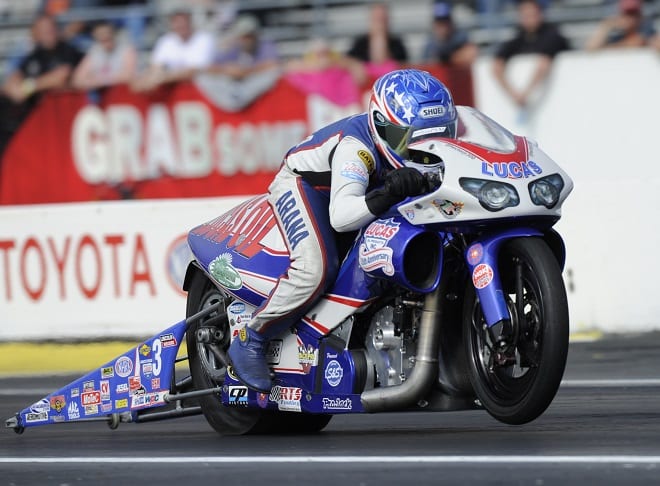 “When we were waiting in the staging lanes we could feel the temperature dropping pretty rapidly so we knew it was going to get faster and we were able to get lucky and everything came to us,” Arana Jr. said. “We were able to run pretty well.”

Karen Stoffer qualified second with a 6.853 at 196.02 on her Suzuki Extended Protection Suzuki. Jim Underdahl posted a 6.857, 194.80 on his Suzuki Extended Protection Suzuki to take third. Hector Arana Sr., winner of the most recent Pro Stock Motorcycle event in Atlanta, sits in the fourth position, while defending world champion Andrew Hines raced to the fifth spot. Local favorite and series leader Eddie Krawiec, the defending event winner, is ninth overall.

Qualifying resumes Saturday at 1:15 p.m. with the final two sessions to set the fields for Sunday’s 11 a.m. eliminations.