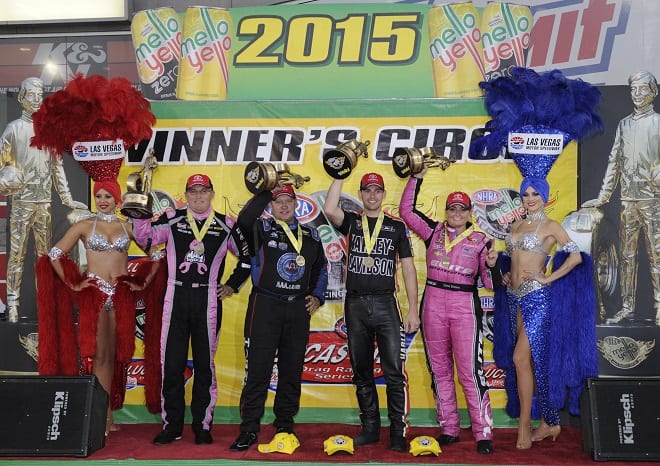 Brown claimed his second Top Fuel world championship when he advanced one round farther than rival Tony Schumacher during eliminations. Enders secured her second straight world championship crown when she won in the quarterfinals and rival Greg Anderson lost in the same round. Enders then raced to victory, her ninth of the season and fourth in a row at LVMS. Brown lost in the semifinals.

Brown, who also won the Top Fuel world championship in 2012, remains the only African-American to win a major U.S. auto racing championship title. He opened the playoffs with three consecutive wins to put his team in position to clinch the title early, with one race remaining. He nearly claimed his eighth victory of the season today, but he lost a photo-finish to veteran racer Kalitta in the semis. 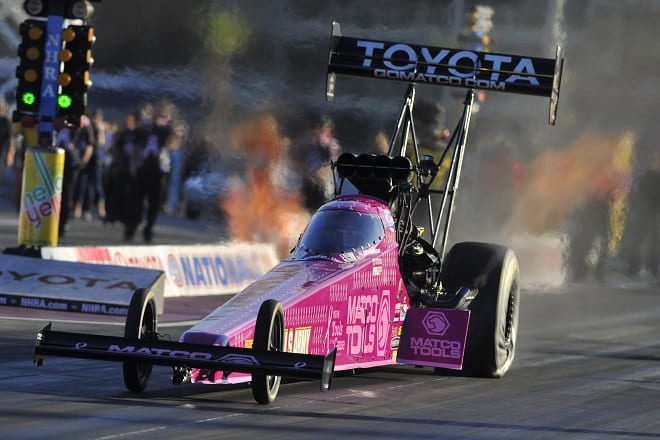 “We were greedy. We really wanted to have the Toyota Wally (trophy) next to that big Wally, but, hey, we’ll take the big one any day,” said Brown, whose Matco Tools team pocketed $500,000 for the championship title. “I just lost a race to Doug Kalitta by five-ten-thousandths of a second. It’s probably the closest race of all year. That’s how competitive this class has gotten, and that’s what makes this so big and makes it worth it when you can go out there and win a championship like our team has.”

Meanwhile, Enders joined Angelle Sampey as the only women in NHRA history who have successfully defended a 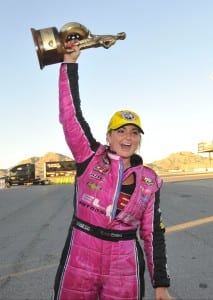 Enders claimed her fourth consecutive victory at LVMS and 21st career victory by outrunning rookie Bo Butner in the final round. Enders Elite Motorsports Chevy Camaro posted a 6.595 at 208.97 to finish in front of Butner’s Speed Dawg Shift Knobs Camaro, which trailed with a 6.610 at 209.33.

“My guys are so incredible,” said Enders, who earned $250,000 for the championship and another $50,000 for taking the event victory. “It’s amazing what you can accomplish when you get the right people around you. To do it in front of all my sponsors and family here this weekend it is incredible. To cap off a second world championship here at Vegas is just crazy.”

Kalitta took his third win of the season by outrunning Larry Dixon’s C&J Energy Services dragster in the Top Fuel final. Dixon’s dragster lost traction early and Kalitta’s Mac Tools dragster roared by, but then shut off early and coasted across the finish line for his 38th career victory.

“It was a good day for us,” said Kalitta, who moved from 10th to sixth in the points standings with the win. “As we were going rounds, once we got past Antron cause that was an incredibly close race, I was feeling good for the finals. Not sure what happened there in the final. It was a lucky win for us, but we’ll take it. It’s Vegas and anything can happen.” 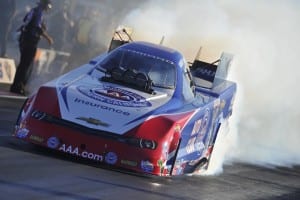 In Funny Car, Hight earned his second win of the season and 36th of his career, powering his Auto Club Chevy Camaro past top qualifier Tommy Johnson Jr.’s Make-A-Wish Dodge Charger R/T. With the win, Hight moved past Don “The Snake” Prudhomme and Cruz Pedregon on NHRA’s all-time Funny Car wins list. He moved from eighth to sixth in Funny Car points.

“It’s really a bummer to me to not be in the points chase this late in the year,” said Hight, who is now a five-time winner at LVMS. “We’re not used to that. It drives you because you want to be there. It makes you dig deep so we’re not in the same position next year. We got a win out of it. Del Worsham’s a good friend of mine. I’m pulling for him to win the championship, but Auto Club pays me to win races, and luckily, we got the job done today.”

Johnson’s strong effort this weekend put him in the championship conversation in Funny Car, albeit 97 points back in third place behind leader Del Worsham and second place Jack Beckman. Worsham and Beckman lost in the second round and Worsham leads by 38 points heading to the season-finale at Pomona.

Hines earned his fourth Pro Stock Motorcycle victory of the season and third in the Countdown, powering his Screamin’ Eagle Vance & Hines Harley-Davidson past Jerry Savoie’s White Alligator Racing Suzuki in a final round with major title implications. With the win, Hines increased his series lead to 46 over the hard-charging Savoie. The championship in the two-wheel class will be decided at the Auto Club NHRA Finals in two weeks.

“The biggest thing was that final round battle between one and two in points,” Hines said. “We’ve been running neck 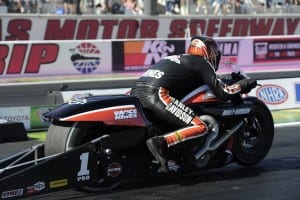 and neck all weekend long. I was in damage control all day and I was lucky enough to turn on a few win lights. That final might’ve looked pressure packed, but I was calm and confident. I knew I needed a good race. The team was able to make the motorcycle go quicker in the final and we got the win.”

The 2015 NHRA Mello Yello Countdown to the Championship concludes Nov. 12-15 with the Auto Club NHRA Finals at Auto Club Raceway at Pomona (Calif.).