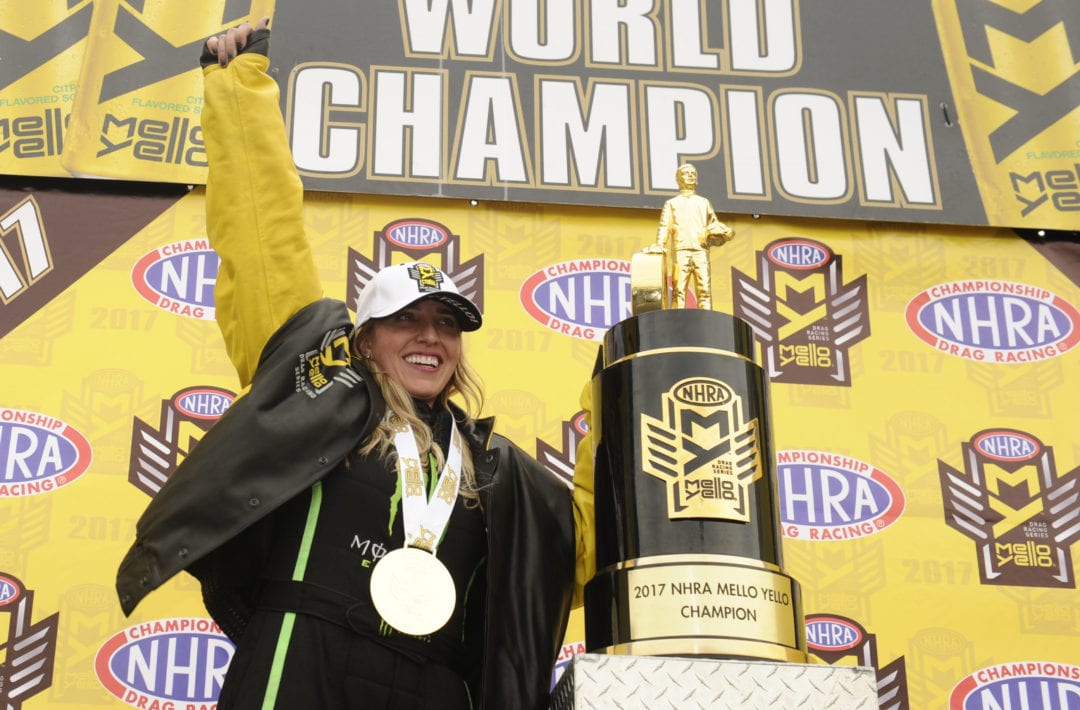 It wasn’t until last Tuesday that Brittany Force finally had a chance to exhale.

After clinching her first Top Fuel world championship during the second round of the Auto Club NHRA Finals in Pomona, Force went on to win the race to end her year in style.

The pinch-me feeling continued into Monday when Force got on stage at the NHRA’s season-ending banquet, offering one thank you after another.

A day later, Alan Johnson, who has worked with Force and her team the past two seasons, took the entire team to Santa Barbara to celebrate. There, Force was able to try and process what just took place with her team. Like it was two days earlier, the fact she had won a world title still seemed surreal.

“Being away from the track with my team, that’s when it began to settle in,” Force said on Drag Illustrated Editor-In-Chief Wes Buck’s live Facebook show. “All we talked about for two days was everything that went on Sunday and all season long. It’s such a huge accomplishment and I’m so proud of my entire team for ending up on top. It still doesn’t seem real.”

It’s very much real and the reality is Force became the first female Top Fuel world champ since Shirley Muldowney did it 1982. Force did it on the strength of a blistering performance in the Countdown to the Championship, winning three races and advancing to four final rounds in a six-race span.

The Pomona victory was simply icing on an utterly delicious cake, as her second-round victory over Richie Crampton sealed the title over Steve Torrence. Both were after their first world title, but Force was simply stone cold down the stretch, even atoning for a red light in the final round at Vegas. It was a moment that stuck with her leading up to Pomona, but with Johnson’s positive reinforcement, Force stayed confident heading to the finale.

“He tries to help me out in every way that he can,” Force said. “After I had that red light, we sat down and talked. He said, ‘I’m not worried about it, you’re a great driver, we’ll be good in Pomona.’ He said he was proud that I pulled through and as a team we all made it happen. He’s been amazing to work with and he’s been very patient with me. He’s always had my back.”

Force rose to the occasion as well, continuing to show impressive improvements in her driving, and doing it in pressure situations. Rebounding from the Vegas mishap was an important step for her, with her validation coming in the second-round win that clinched the title.

“Climbing out at the top end, it’s something I’ll never forget,” Force said.

It’s a moment Force nearly never had the chance to experience. She said she couldn’t have imagined driving a Top Fuel car 10 years ago, and Force graduated college with the intent of becoming a teacher and possibly race her A/Fuel dragster on the side.

Her first chance to get in a Top Fuel dragster changed her life’s direction and, as a result, she couldn’t be more content.

“I had the opportunity to get in a Top Fuel car and it was just to make passes,” Force said. “There was no plan for me to, you know, be competing in one. But once I got in the thing and made my first pull all the way down the track, I got out on the other end and I was very confident. I knew that’s what I wanted to do. I knew I was going to go into Top Fuel, but it does feel good to come out on top after being torn between two different things, knowing I definitely made the right decision. I absolutely love my job, I love driving and the people I’m around, and I couldn’t be any happier.”

Force has been on the fast track to success since then. With younger sister Courtney competing in Funny Car and her other sister, Ashley Force-Hood, working at John Force Racing, Brittany has carved out her own path as the Force family’s first and only Top Fuel driver.

She has developed quickly, picked up her first win a year ago – a season after she landed the Monster Energy deal – and never once felt a massive shadow racing with the Force name made famous by her father, John, who owns 16 Funny Car world championships.

In fact, their relationship can be summed up with a quick story, one that illustrates just how much support Brittany feels and how that affects her positively at the track.

She still had not watched the final race a week after it had completed, waiting for a free moment where she can sit down and watch it with her father and mother. It’s a moment she’s anxious for, reliving her championship while watching from the couch with the two people who have supported her journey every step of the way.

“My family and I are so close and we’re so supportive of each other,” Force said. “Obviously no one can ever fill my dad’s shoes. Sixteen championships just seems unreal to me. (But) I never felt in the shadow because I have his supportive. He’ll always have my back. I’m lucky to have his supportive and his guidance.”