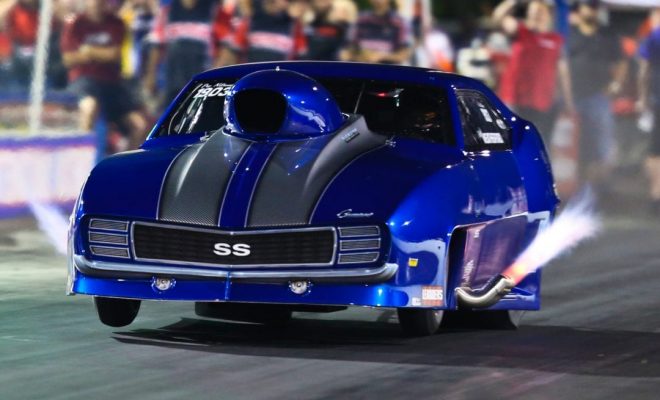 The eighth-mile competitors of the Professional Drag Racers Association will kick off the summer portion of their eight-race season this weekend at the PDRA Summer Drags, May 31-June 2, at US 131 Motorsports Park. The event will feature a variety of exciting one-off races and competitions in addition to the standard qualifying and eliminations for the PDRA’s six professional classes and seven sportsman categories.

Among the special races is a “Bottles vs. Blowers” grudge race between two of the biggest stars in Switzer Dynamics Pro Nitrous presented by MoTeC and Moroso Pro Boost. Randy Weatherford, who won his first Pro Nitrous race last month at the PDRA North-South Shootout, will face off against Pro Boost points leader Tommy D’Aprile.

“I’m really excited for this race – I wish I could watch it,” D’Aprile laughed. “But I’ll be close enough, so that will be good. I think it’s going to be a great race. If Randy runs what he was running and we run the way we were running, it’s going to be close, and that’s what the fans want to see.” 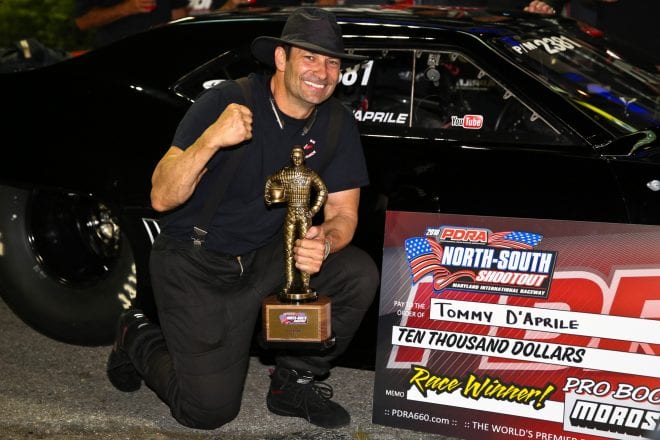 While Weatherford and D’Aprile bear striking similarities – they both race ’69 Camaros, they both won the most recent race, and they’re both capable of running in the 3.6-second range – the similarities end when it comes to their powerplants. Weatherford’s Camaro is powered by a nitrous-fed Pat Musi 959 ci engine, while D’Aprile relies on horsepower from his Al Billes-supercharged, Noonan 481 ci Hemi. The Bottles vs. Blowers grudge race is set for Friday night’s third and final qualifying session.

“We’re treating this just like any elimination round,” D’Aprile said. “We want to run fastest in qualifying and fastest in eliminations – that’s anybody’s goal. We’ve been fortunate in being able to do that so far, and hopefully we can continue to run that way.”

The Bottles vs. Blowers race isn’t just for bragging rights, though, as both drivers will represent their favorite charities. Weatherford and his company, WS Construction, have offered up a $1,000 donation to the winner’s chosen charity. A win light in Weatherford’s lane will mean a donation for the Alzheimer’s Association, while D’Aprile will pass his donation on to St. Jude Children’s Research Hospital.

“When we decided to pick a charity for this race, St. Jude came to mind because they do so much for so many,” D’Aprile said. “I don’t think most people realize St. Jude doesn’t charge families for the care they provide. My heart goes out to that organization and hopefully we can pull off the win for them.”

Swedish doorslammer racing hero Adam Flamholc also wanted to get in on the grudge racing action, so he’s called out any fellow racer in Bryant Industrial Pro Extreme presented by Pro Line Racing. Flamholc, the Pro Extreme winner at Maryland last month, says he’ll race anyone in Pro Extreme for $1,000 in Friday qualifying. He hopes the added incentive – piled on top of the $10,000 event winner payout – will help draw more cars and put more eyes on the series’ quickest and fastest class.

“I guess I’m trying to stir the pot a bit and get people interested in the class again,” Flamholc said. “There are cars out there, and PDRA is a great place to race at – good payouts, great tracks, and so on. The PDRA has repeatedly said the class is here to stay, so I really hope we get the support we need from teams and car owners!”

Friday qualifying will also feature a burnout contest for racers in Liberty’s Gears Extreme Pro Stock and MagnaFuel Top Sportsman. Drivers who make a pass during the last qualifying session on Friday are automatically entered into the contest, which is sponsored by Race Hard Apparel in Extreme Pro Stock and Classic Graphix in Top Sportsman. The burnout contest winners, picked by the announcers based on the crowd’s reaction, will receive $300 and a trophy.

On top of the thrilling on-track action, the PDRA Summer Drags will include a live performance by country recording artist Tony Bakker. Bakker, a West Michigan native, will perform from 8-10 p.m. Friday night. The concert is included in all Friday spectator tickets.

The PDRA Summer Drags will feature all of the classes listed above, in addition to Drag 965 Pro Extreme, East Side Auto Transport Pro Outlaw 632, Lucas Oil Top Dragster and Edelbrock Bracket Bash. The stars of the sport will be represented in Coolshirt Pro Jr. Dragster and Gilbert Motorsports Top Jr. Dragster.

Tickets to the PDRA Summer Drags are available for $10 for Thursday testing, $20 for Friday qualifying and $25 for Saturday eliminations. A weekend pass, good for all three days, is available for $40. Children 12 and under get in free. Tickets are available at the gate or online at www.pdra660.com.