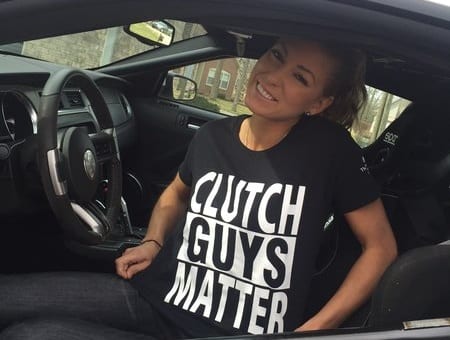 A friendly debate has inspired a new line of t-shirt with a catch phrase and a meaningful cause.

Rob Boninfante believes clutch guys matter, in a world where automatics seems to be the trend in many aspects of drag racing, particularly in doorslammer competition.

When Boninfante became involved in a Facebook debate, he uttered a phrase which immediately gained favor amongst his allies.

Boninfante, who is the face of Boninfante Friction, a manufacturer of high-performance clutches and applications, responded with a catchy retort, “Clutch Guys Matter.”

“Then someone responded that would make a heck of a shirt,” Boninfante said. “The more I thought about it, I thought it might be good to do. I didn’t think much of it until the next morning when I had several hundred requests for shirts. The next thing I know, there was a mock-up of the shirt in my email.”

Boninfante hasn’t spoken much about his personal experience with the hospital until now. A little over a year ago, his son was in the hospital where he underwent an eight-hour brain surgery for a tumor, which was later determined to be benign.

“Phenomenal place to go,” said Boninfante. “I just went in there and saw the love and compassion they showed these children. It just touches my heart. We donated a chunk of our personal money to help the hospital with their child life program, this benefits the children and parents that are in the hospital. We are now raising money to help the brain tumor lab research.”

These t-shirts are available through www.clutchkings.com.