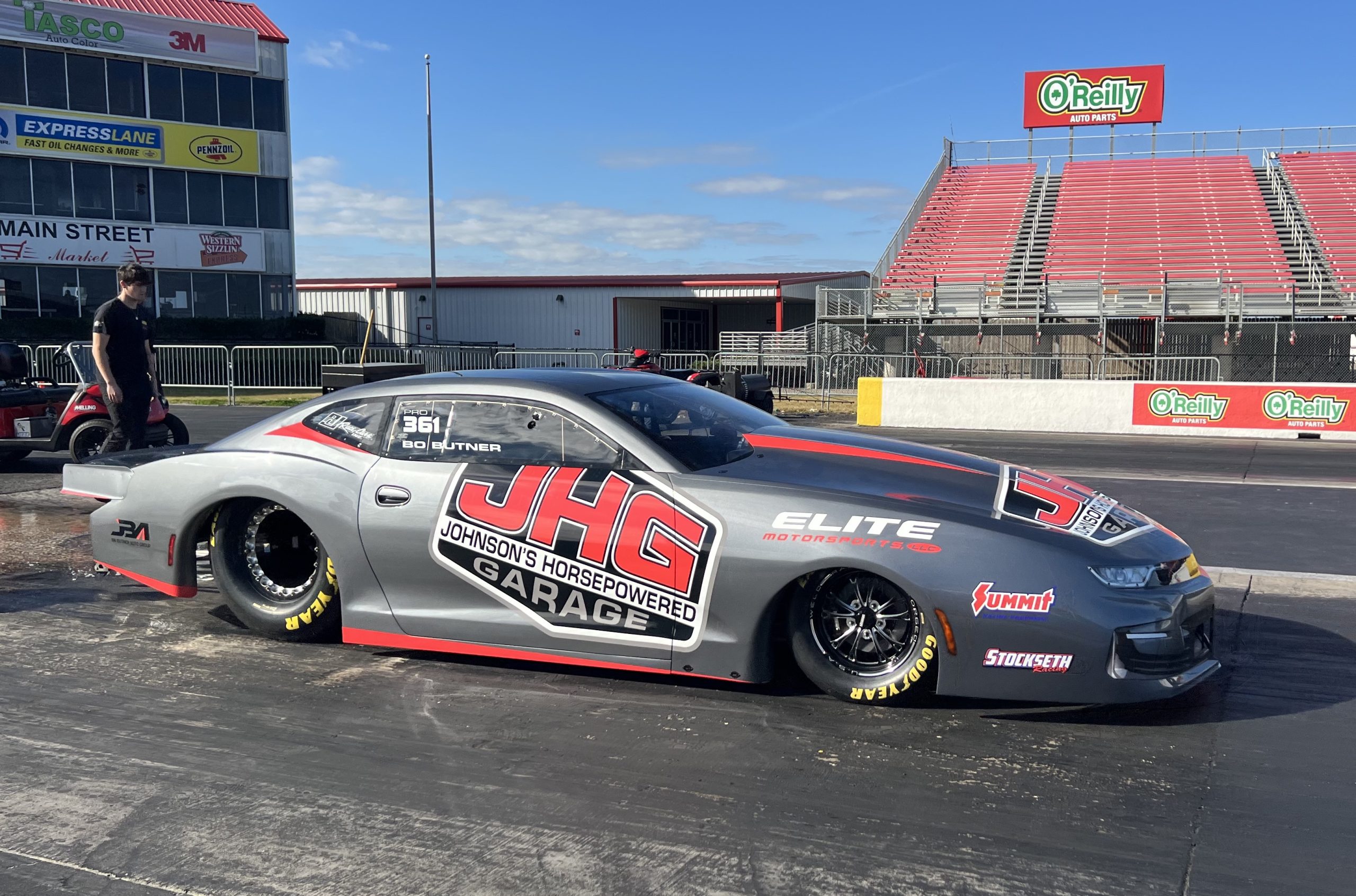 Johnson’s Horsepowered Garage will be well-represented in NHRA Pro Stock this season with veteran racer Bo Butner behind the wheel of the JHG Chevrolet Camaro. Butner, an 11-time NHRA Pro Stock winner and the 2017 world champion, is aiming at expanding his scorecard and enjoying the ride along the way.

“I sat in it, put the belts on, and just smiled,” said Butner, who made a handful of passes to get his feet wet ahead of the 2022 season of NHRA’s Camping World Drag Racing Series. “This car was made for me. I fired it up that first time and it did the most perfect burnout. We weren’t going to take it very far, so I ended up going just past the eighth – but it could have gone all the way down. It was so nice; it felt like a Cadillac.”

In testing, decorated crew chiefs Tim Freeman and Mark Ingersoll worked together on making calls on the Johnson’s Horsepowered Garage Chevy, but tuning duties are a collaborative effort in the Elite Motorsports camp. Butner will have much competition in his return to NHRA Pro Stock, where he last raced full time in 2020, and some of his staunchest – though friendliest – rivalries will be housed right there in the same garage.

“This is a new team for us this year,” said Butner. “Now that we’ve spent some time on the racetrack with them, I can tell you that they have a lot of fun – but when it’s time to be serious, they’re completely focused. They’re all for one and one for all, and they’ve really welcomed us. All the guys work together, and they listened to my input. I’m excited. We’ll be fast, and we’ll be able to turn on some win lights.”

Turning on win lights is something Butner knows how to do. In addition to his 11 previous Pro Stock wins, he’s a 16-time winner in the Lucas Oil Drag Racing Series, NHRA’s premier Sportsman series. He is one of the few racers to have claimed victory in six different categories: Pro Stock, Comp Eliminator, Super Stock, Stock Eliminator, Super Street, and Super Gas.

The season will begin at this coming weekend’s Lucas Oil NHRA Winternationals at Auto Club Raceway at Pomona, and that’s a racetrack where Butner is well-versed in winner’s circle celebrations. He won the Pro Stock Wally at the season-opener over Jason Line in both 2018 and 2019, and he has three additional wins in Pomona with trophies earned there at the NHRA Finals in Super Stock over Jeff Taylor (1999), Stock Eliminator over Peter Biondo (2013), and Pro Stock over Tanner Gray (2018).

“I love that we’re starting the year in Pomona,” said Butner. “We have some history there, and you always want to start the season on a good note. It’s going to be so much fun this year with Jason and Nikki Johnson and Johnson’s Horsepowered Garage on board. We want to show them the best of NHRA and that we can have a good time but also be very competitive. We’ll have to work hard, but this whole year is about taking the time to enjoy this blessing. If you do that, you’re going to turn on win lights.”