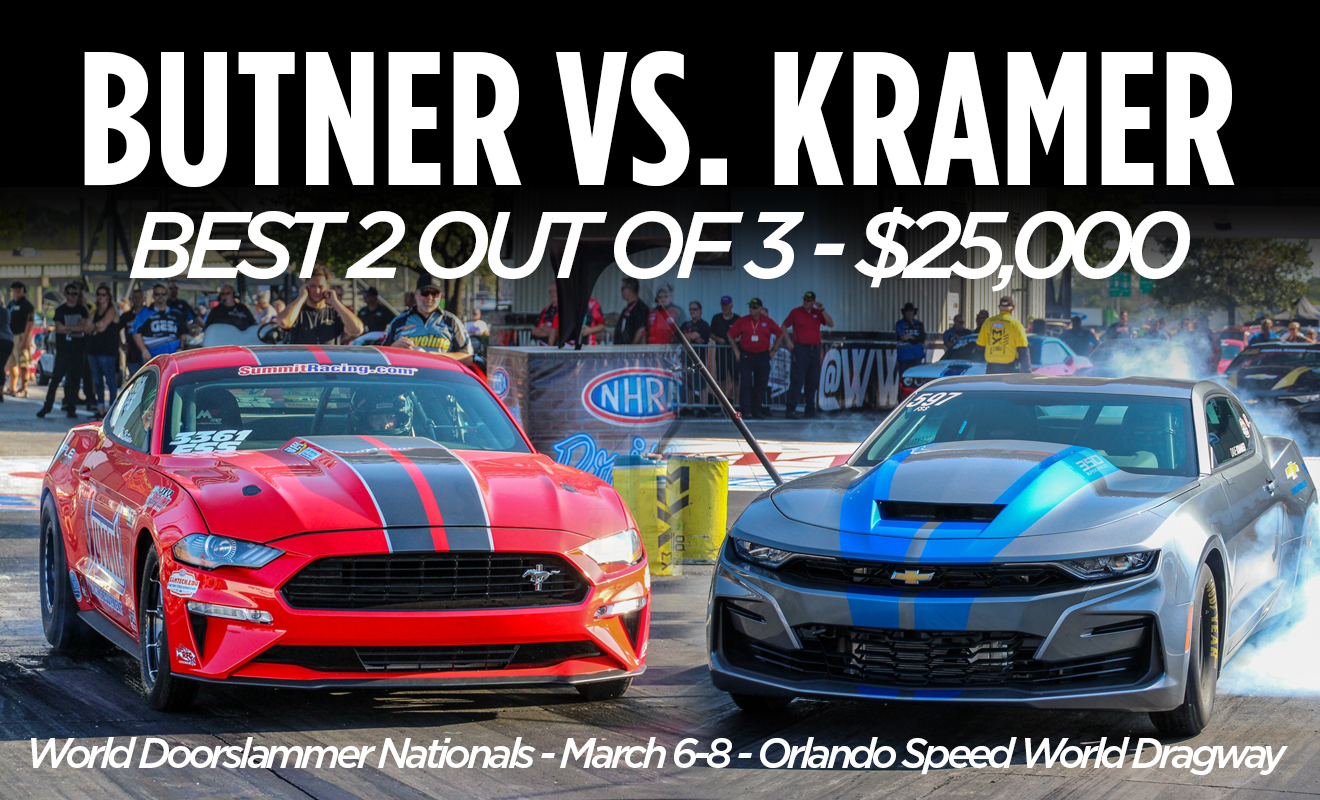 The friendly barbs and endless trash talk has gone on for months.

Now, Bo Butner and Dave Kramer are going to settle things on the track – with $25,000 on the line – at the Drag Illustrated World Doorslammer Nationals presented by CTech Manufacturing.

The event takes place March 6-8 at Orlando Speed World Dragway, and Butner and Kramer’s best two-out-of-three duel will take place on Saturday in Factory Stock Showdown. The winner gets $25,000 – though Butner predicts that purse could go up by the time Saturday night arrives – and some major bragging rights.

“Like I told him when he started talking, he’s got the easy part done. He’s talked about it,” said Butner, who campaigns a Cobra Jet Ford Mustang. “His stuff is fast, but I think we’ve got something to surprise him with.”

Kramer, who won a NHRA race in St. Louis in the class a year ago in his Chevrolet COPO Camaro, had a retort at the ready.

“There’s been a little jabber back and forth the last year between the Fords and Chevys, and it’s been pretty friendly, but it’s going to get pretty competitive. I think we picked up some power over the winter and he didn’t cut a .000 light like I did in St. Louis,” Kramer said, laughing.

Kramer won with a perfect light in St. Louis and it may come down to who is better among the two talented drivers on the starting line in Orlando.

This type of grudge-style racing has always appealed to Butner, a multi-time NHRA world champion, and he’s ready to put on a show in front of what is expected to be an electric atmosphere at the facility.

“This type of thing, having match races or a best two out of three, is happening everywhere and we’re bringing that to our world,” Butner said. “I’m very excited. I love this type of racing. It drives me in the car and when you’re racing for something a little extra, it fires you up. It definitely has that effect on me.”

Butner is so in on the match race with Kramer he hopes it extends to Pro Stock qualifying. He’s ready to put extra cash up for grabs there – and make a few callouts if he has to – during his qualifying matchups. Butner, who is sponsored by Strutmasters, a major partner for the event, predicts things could get really wild before their three Factory Stock Showdown matchups on Saturday.

“Who knows what it could build up to, but it’s going to be fun,” Butner said. “Wes (Buck) will get the crowd involved and it’s going to be a win-win for everybody. I can’t wait for this race and I hope we can do more of it. I really believe this race could be the start of something cool.”

Butner plans to arrive at Orlando on Wednesday to test and then commence with more trash talk.

Kramer will gladly oblige, having tested at Orlando earlier this year. KB Racing’s Jason Line, who will be racing Pro Stock at the event, built Kramer’s new Factory Stock Showdown Camaro motor and Kramer is thrilled with the potential.

“We’re both raring to go,” Kramer said. “We both said, ‘Let’s put our money where our mouth is,’ so here we go. I just love this class. It’s one of the most fun cars I’ve ever been in and I’ve driven a lot of different things. It’s just a blast to drive, so let’s see what happens.”

Of course, it’s going to be a lot more enjoyable if he’s holding some extra cash in his hand on Saturday.

Kramer’s company, American Ethanol, is also a sponsor for the World Doorslammer Nationals, while his son, Deric, will be racing in Pro Stock at the race.

Dad’s concentration, though, is on beating Butner, grabbing bragging rights and a cool $25,000 – or more – and enjoying an event he expects will deliver something special.

“I think it’s going to be close racing and the guy who cuts the better light between Bo and I is going to win the race,” Kramer said. “They do a great job with the track, it’s a nice location and everyone there is awesome to work with. I can’t wait.”