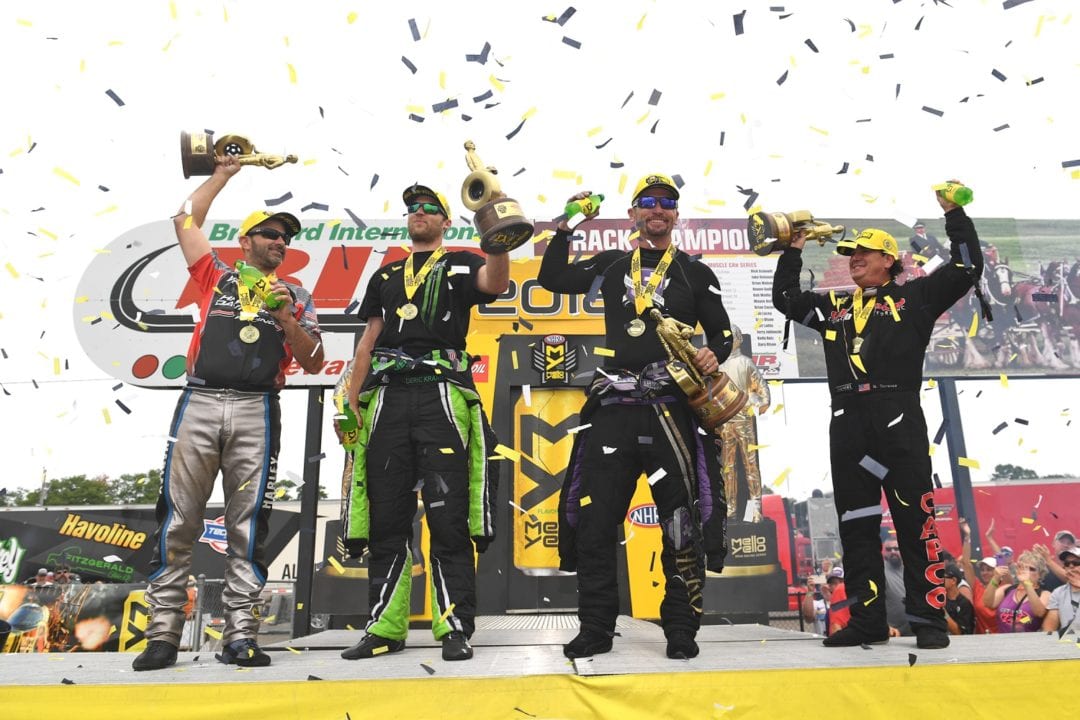 Billy Torrence picked up his first career Top Fuel victory with a win on Sunday at the Lucas Oil NHRA Nationals at Brainerd International Raceway.

Torrence, whose son, Steve, is the points leader in the class, went 3.756 at 329.99 mph in his Capco Contractors dragster to defeat three-time world champion Antron Brown on a holeshot in the final round. Making his 27th career start, Billy Torrence, who was also the No. 1 qualifier for the first time in his career this weekend, knocked off Terry Totten, Scott Palmer and Mike Salinas to face off with Brown in his first career final round appearance.

“To come out here and be able to win a event, and give back something to those guys who give me a good operation when I come out, that’s just a blessing,” Torrence said. “At this level, there’s pressure on everyone to win. I just wanted to win and Antron is a tremendous racer, and you just have to be on your game. We prepare well and we have a great team put together, and a great car. We have all the right parts and pieces.”

Steve Torrence maintained his points lead in the class despite falling to Brown in a tight semifinal race. Brown, who won the previous race in Seattle, is now a point out of fifth place, beating Luigi Novelli, defending world champion Brittany Force and S. Torrence to reach his 121st career final round and third straight at Brainerd.

In Funny Car, Jack Beckman secured his second victory of the season and 28th of his career in his Infinite Hero Foundation Dodge Charger R/T with a run of 3.961 at 325.69 against Don Schumacher Racing teammate Tommy Johnson Jr. in the final round. Beckman, who recorded his first career Brainerd victory, also posted wins against Matt Hagan, Shawn Langdon and points leader Courtney Force. 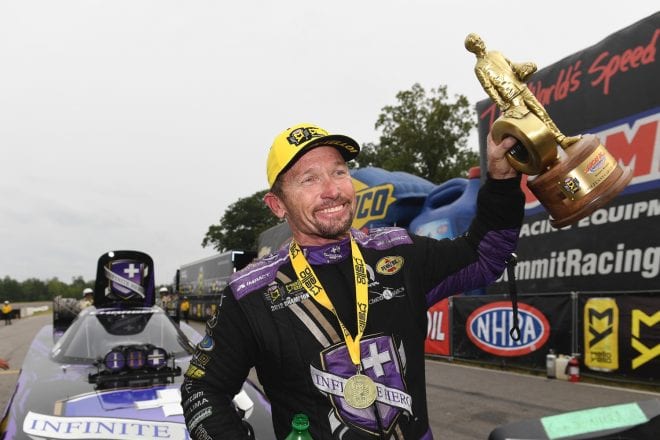 “We have struggled, it’s no secret we haven’t had the car we had early in the season,” said Beckman, who moved to fourth in Funny Car points. “We weren’t exactly stellar Friday and Saturday and we didn’t have lane choice all weekend long. (But) I feel a heck of a lot better today than I did yesterday. To put it back in the winner’s circle again, it just reaffirms we have a contending car. I like the way we picked away at things and we got significantly better every time down the racetrack today.”

Johnson clinched his spot in the Mello Yello Countdown to the Championship on Sunday, advancing to his second final round of the season with victories over Del Worsham, Tim Wilkerson and J.R. Todd, who also secured his spot in the playoffs.

Pro Stock’s Kramer grabbed his second career victory in his American Ethanol Chevrolet Camaro after going 6.652 at 207.56 in the final round to defeat Tanner Gray. Kramer’s first career win came earlier this year in Topeka, while Sunday’s path to the winner’s circle also included round wins against Vincent Nobile, Alex Laughlin and Jason Line. Kramer clinched his spot in the Countdown to the Championship on Sunday as well.

Gray, who remained second in points, advanced to his second straight finals at Brainerd with victories over Dave Connolly, Fernando Cuadra and points leader Greg Anderson. Line, Chris McGaha and Drew Skillman all secured their spots in the Countdown to the Championship.

In an all-Screamin’ Eagle Vance & Hines Harley-Davidson final round, defending Pro Stock Motorcycle world champion Krawiec earned his fourth victory of 2018 and 47th of his career with a run of 6.897 at 195.14 to beat teammate Andrew Hines. Krawiec moved within 11 points of Hines for the points lead with his fourth career Brainerd victory, one that also included round wins against Ryan Oehler, Mark Paquette and Hector Arana Jr. 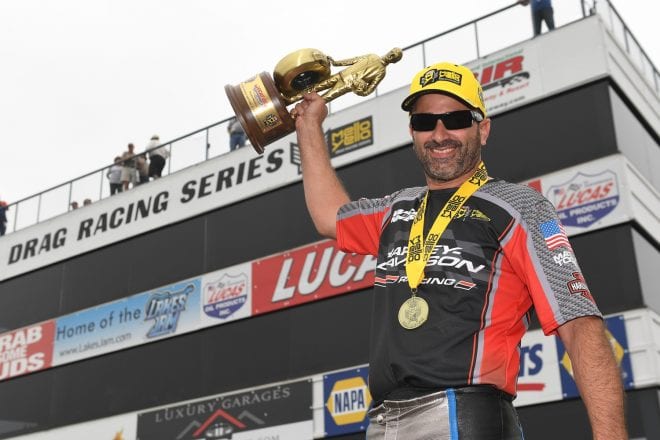 “It’s about building momentum right now,” Krawiec said. “We know where we are and we’re in a great position. I think as long as you have that great drive and have that upbeat spirit, you have everybody all excited and that’s what it’s about right now. I have a good motorcycle under me. I know if it’s not winning, it’s most likely because of me. It’s just great to come out and run well. We had a consistent motorcycle and that’s what you need to win races.”

Hines’ path to his fifth final round this season included wins against Karen Stoffer, Jerry Savoie and Angie Smith. No. 1 qualifier Matt Smith also clinched his spot in the Countdown to the Championship.