Brittany Force (Top Fuel) and Matt Hartford (Pro Stock) were also victorious in their respective categories at the fifth of 24 events on the Mello Yello Drag Racing Series schedule.

Todd powered his DHL Toyota Camry to a pass of 3.955-seconds at 313.29 mph to defeat defending world champion Robert Hight in the final round. He is the third driver in Royal Purple Raceway history to have won in both Top Fuel and Funny Car. This is his second win of the season and 13th of his career. 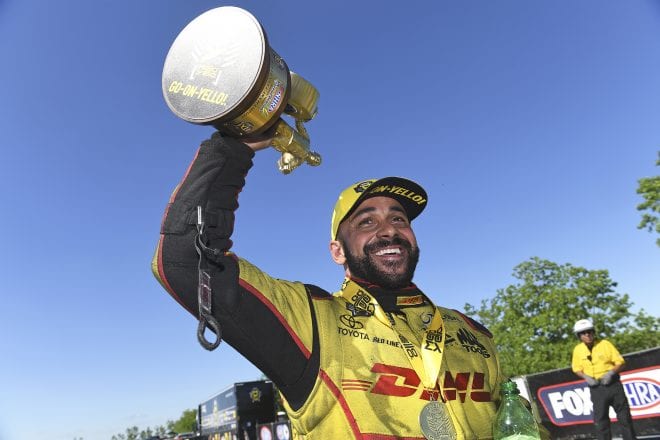 “It’s nice to have this much momentum early in the season,” Todd stated. “We struggled really bad last season and didn’t really turn around till probably the Western Swing. It’s nice as Kalitta Motorsports to come out swinging at these races this year.”

Force, the defending Top Fuel world champion, piloted her Monster Energy dragster to a pass of 3.762 at 299.46 to defeat Terry McMillen in the final round. She is the seventh different John Force Racing driver to win at Royal Purple Raceway and she completes the cycle of all Force family members have one at the facility. This is her first victory of the season and eighth of her career.

“We kind of struggled a little bit today,” Force said. “The tires were spinning and I’m trying to drive the thing down there and try to get it to the finish line. I didn’t know where the guy was next to me, but it was just about getting down there first. Saw our win lights come on in the final round and that was the most important one.”

Force drove past Terry Haddock, Doug Kalitta and Tony Schumacher to reach her first final round of the season 18th of her career. McMillen defeated Antron Brown, Billy Torrence and No. 1 qualifier Leah Pritchett before entering his fourth career final round. 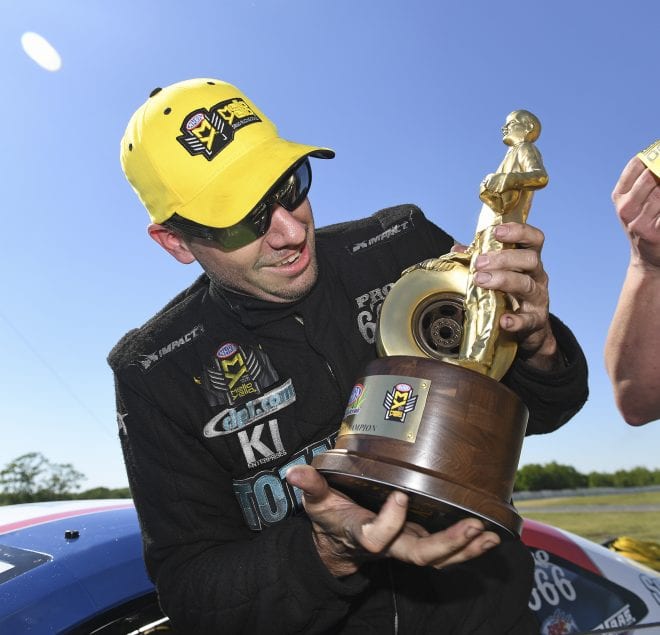 In Pro Stock, Matt Hartford drove to his first career winner’s circle after taking down the hometown hero Erica Enders. His pass of 6.552 at 211.36 in his Total Seal Chevrolet Camaro was enough to make him the 66th different Pro Stock driver to win in NHRA history.

“We started in the back half of the field today and had to work our way through,” Hartford stated. “We earned this. We did a better job with our car today than the other teams. My driving is not why we won today and that is a fact. My crew tuned the car enough for us to be able to drive around her [Enders] at the end.”