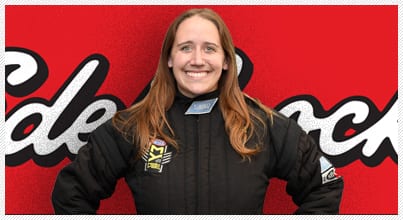 Edelbrock is excited to announce Audrey Worm as the latest addition to Team Edelbrock Racing. Audrey Worm started her racing career in her dad’s Slingshot Dragsters shop’s nostalgia front engine dragster at the age of 16. She competed in nostalgia drag races nationwide for over 8 years. She earned her Top Fuel license on Labor Day weekend in 2017 and made her NHRA debut at Maple Grove Raceway in September 2017 during the Dodge NHRA Nationals. Audrey is one of the only modern day NHRA drivers to move from Nostalgia dragster directly into Top Fuel racing. This big jump has become the mantra of her team… “Old School to Top Fuel”.

She is currently driving the Leverich family dragster that is wrapped in Team Fox and OutrunPD. Both of these causes are focused on bringing awareness to Parkinson’s Disease to help raise money for the Michael J. Fox Foundation for Parkinson’s research. She will be competing in at least 8 NHRA Mello Yello Top Fuel races this year. Her ultimate goal is to raise a million dollars for Parkinson’s Research and Edelbrock is excited to support her team in this effort. Audrey was also named by Drag Illustrated in 2015 as one of their “30 Under 30” most influential people in drag racing. She is a rookie driver in the running for the NHRA Auto Club Road to the Future Award.

“I am really excited to be able to represent Edelbrock and work together to Outrun Parkinson’s Disease”, states Audrey Worm. “We’re really excited to be supporting Audrey and her team for the rest of this season. Both Team Fox and OutrunPD are great causes that deserve attention and Audrey is the perfect driver to do this”, states Don Barry, Edelbrock President and CEO.