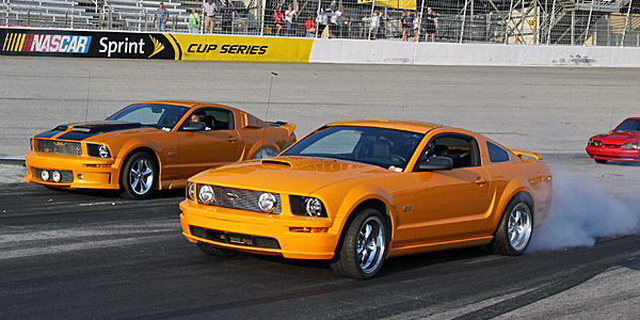 With new changes and upgrades to the racing surface and competition for 2013, Atlanta Motor Speedway (AMS) will fire up its seventh full season of Friday-night drag racing on the opening night of action, April 26. A total of 18 nights of racing will span from April through September.

Among the new additions to the 1/8-mile pit lane drag strip include a new 250-foot concrete launch pad, as well as a brand-new starter tree. Both changes will enhance the competition between racers and the entertainment for the fans as one of the country’s most popular and successful weekly drag racing programs heads into another year.

Eighteen divisions of competition for all makes and models of cars, trucks and motorcycles will race on April 26, May 3, May 10 and May 17, with the 2013 points season opening on May 31 and continuing each week through Aug. 16. Racing will then resume on Sept. 13 and Sept. 20 for the two-week Fall Stampede following the speedway’s Advocare 500 NASCAR Sprint Cup Series weekend, Aug. 30-Sept. 1.

The weekly series will feature street-style drag racing, with similar vehicles being placed within divisions that will battle in a nightly, single-elimination tournament for trophies, bragging rights and season championship points.

Drag racing competition is open to all participants for an entry fee of $20. Vehicles are required to have a working seat belt and each driver must have a D.O.T. approved helmet to race.

Ticket prices remain unchanged from last season, with grandstand admission costing just $8 for adults, with children five and under free. Gates will open each night at 6:30 p.m., with nightly drag race eliminations starting at 9:09 p.m. A smoke and alcohol-free seating section can be found in section 126 of the grandstand. Infield parking is available for $20 per car, plus passenger admission. Parking in the outside lot is free.

Each race night will also include the Show-N-Shine open competition, with seven divisions of judging between cars, trucks and motorcycles. Show-N-Shine participation is $20, and also allows entrants to participate in the weekly Track Cruise around the 1.54-mile racing surface following judging, and prior to the start of drag race eliminations. Vehicles from the Show-N-Shine will also be displayed on the frontstretch following the Track Cruise for fans to view. Show-N-Shine judging will be conducted by the Georgia Outsiders Car Club. Combo tickets to compete in both the Show-N-Shine and the drag racing portion of the evening are available for $30.

Drag racing points champions will have the opportunity to be introduced prior to NASCAR Sprint Cup Series driver introductions at the AdvoCare 500 on Sunday, Sept. 1.