In a thrilling final round matchup featuring Ashley, the 2020 NHRA Rookie of the Year, and Austin Prock, the 2019 Rookie of the Year, Ashley came out on top with a run of 3.694-seconds at 314.53 mph in his 11,000-horsepower Phillips Connect dragster to slip past Prock’s 3.713 at 333.00. It gave Ashley his third career victory and first in Pomona. He knocked off Jim Maroney, Antron Brown and four-time defending world champ Steve Torrence to reach the final round and a year after advancing to the final round of the Winternationals, Ashley impressed in finishing the job on Sunday. 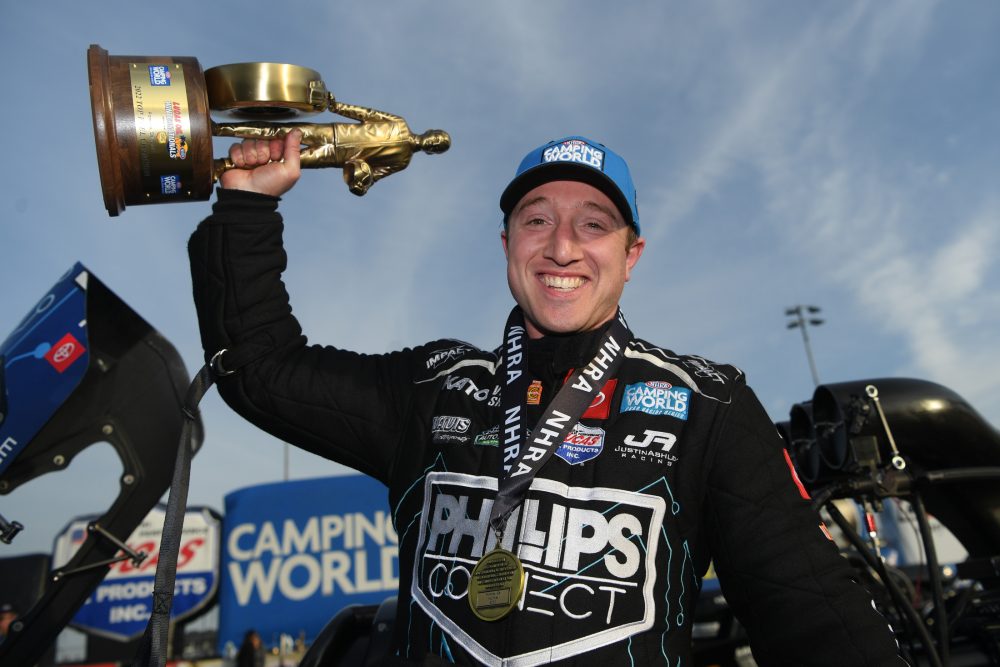 “We knew coming into the day the Top Fuel field was going to be tough,” Ashley said. “You saw today races separated by such little margins. We really had no layups at all and you’re never really going to have any layups. To be able to beat guys like Antron Brown, Steve Torrence, the four-time champ, and Austin Prock, who’s doing a great job, it really solidified what we came out here and wanted to do. We spent the off-season trying to work on power, pick up and get to where we wanted to and I feel like today you could really see that.”

Prock, making his return to full-time race this year, made a strong opening statement, too, advancing to the final round with wins against Clay Millican, Tony Schumacher, who is also returning to full-time racing in 2022, and John Force Racing teammate and No. 1 qualifier Brittany Force. 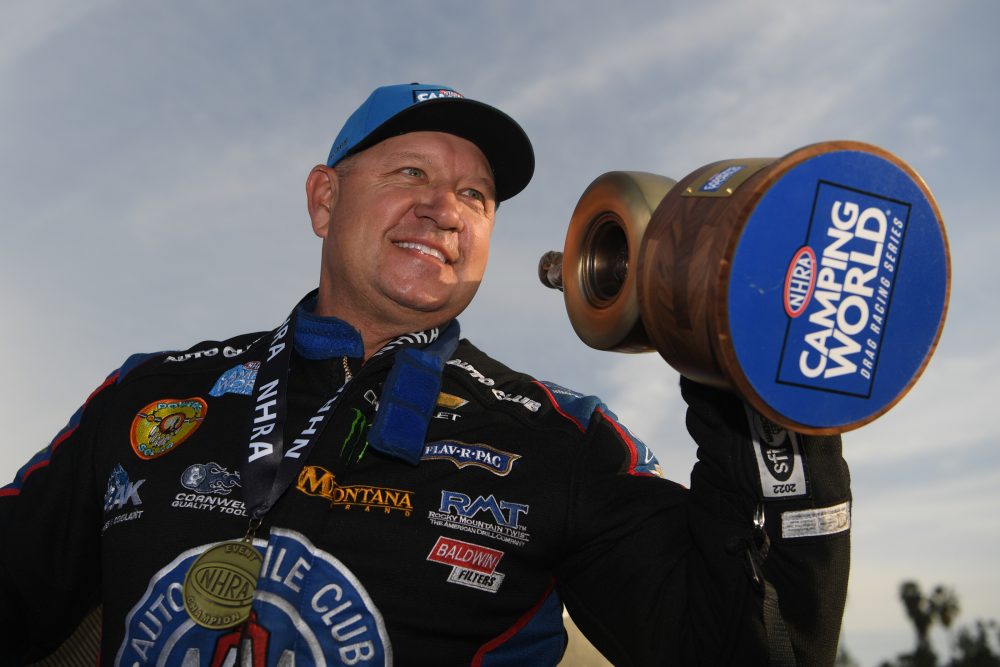 In a tremendous side-by-side matchup of longtime stars, Hight slipped past Ron Capps in the Funny Car final round, going 3.861 at 329.58 in his 11,000-horsepower Auto Club of Southern California Chevrolet Camaro SS to beat Capps’ 3.882 at 333.82. It gave Hight his fifth win at the Winternationals and 54th in his career, setting the tone for a strong 2022 season after finishing a disappointing eighth in the class last season. He advanced to the finals with round wins against Jason Rupert, Tony Jurado and Matt Hagan, going 3.861 in both the semifinals and finals as the three-time world champ put a spectacular opening stamp on the 2022 campaign.

“There are a lot of really great Funny Cars that are doing the same thing and we just happened to get the win today. It’s going to be a battle,” Hight said. “Look at our qualifying run last night. Capps and I were separated by .004 of a second for No. 1 and No. 2. So you know going in the final it’s going to be a battle and it’s going to be a great run and it was .002 at the stripe. It doesn’t get any closer than that. That’s unbelievable Funny Car racing. If someone would have told me you’d see Funny Car racing like that, I’d tell them they’re crazy.

“You have to do your job and everybody on the Auto Club team did their job this weekend. We definitely have more consistency than we had last year. I’m excited about that and with (crew chiefs) Jimmy Prock and Chris Cunningham they’ll just build on that and I can only see it getting better.”

Capps, the reigning world champ and No. 1 qualifier, knocked off John Force, J.R. Todd and Cruz Pedregon to advance to the final round for the 132nd time in his standout career. 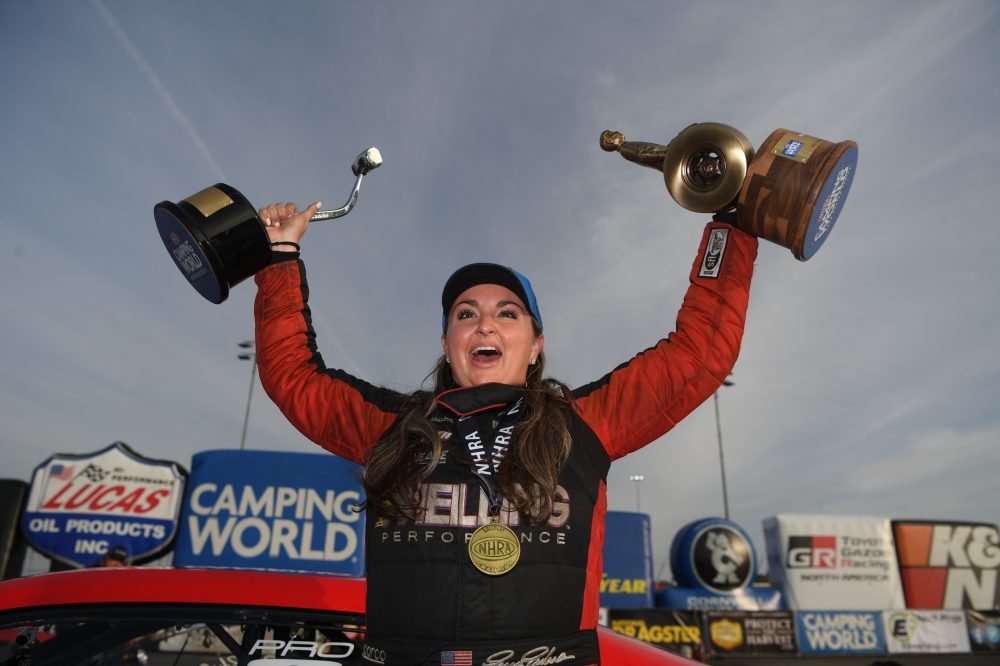 In the 900th race in Pro Stock history, Enders earned her 34th career win, going 6.559 at 210.31 in the final round in her Melling Performance/Elite Motorsports Chevrolet Camaro to knock off teammate Aaron Stanfield. It marked another historic victory for the four-time world champ, who earned a special trophy along with the Wally in honor of the 900th win. Enders knocked off Cristian Cuadra, reigning NHRA Rookie of the Year Dallas Glenn and longtime rival Greg Anderson, the defending world champ, to reach the final round with a trio of strong reaction times. Enders rolled to the win in the championship round, also claiming her first Winternationals victory on a memorable day in Pomona.

“Race day was awesome. It was really challenging, not a walk-through by any means, (and) some interesting stuff happened out there today,” Enders said. “(But) we were able to park the Melling Performance hot rod in the winner’s circle and we’ve never won here at the Winternationals. To be able to secure that 900th Pro Stock victory with that special shift trophy is pretty awesome.

“We’ve accomplished way more than I ever thought in Pro Stock. We’ve stuck it out and showed a lot of tenacity. This win is very significant. You treat every raceday the same, but this win at the 900th Pro Stock race means a lot to me.”

Stanfield, the defending event winner, advanced to his seventh career final round thanks to round wins against teammate Troy Coughlin Jr., Rodger Brogdon and Fernando Cuadra Jr.