Since naming Grime Boss heavy duty hand and surface wipes as its 2013 primary sponsor, Jim Dunn Racing has focused its goals on reaching the Countdown to the Championship and is confident in Jeff Arend’s veteran driving skills to get them to the next step.

Team owner and crew chief, Jim Dunn, is excited about the direction of his team for the new season.

“The first thing we did when Grime Boss committed to being our primary sponsor was to immediately begin purchasing new engines, heads, blowers and the related components to increase our level of performance. Having a world-class driver and fellow Southern California resident like Jeff Arend pilot the car is something I’m really looking forward to this coming season.” 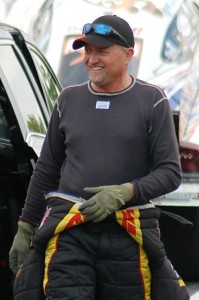 Arend began his drag racing career path with street machines in 1985 and moved up to the professional ranks by qualifying in Paul Smith’s Funny Car at the 1995 NHRA Gatornationals.  Along the way Arend taught at Frank Hawley’s Drag Racing school and drove Funny Cars for Chuck Beal, Al Hoffman, Paul Smith, and Chuck Worsham before moving over to the Kalitta Motorsports/DHL Funny Car from 2008 to 2012.

During the recently completed season he finished in the top 10 for the second year in a row, qualifying for every race and won the Funny Car title at the Route 66 Nationals in Joliet, IL. In 2012, Arend also qualified for the inaugural Traxxas Funny Car Shootout, posted a career-best speed of 318.09 mph in Reading, PA, and a career best elapsed time at 4:036 seconds during the NHRA Finals in Pomona, Ca.

“I am really excited about the upcoming season as well. The Dunns have made quite an investment in new parts and we are all expecting to have a great year together,” Arend said. “I’ve known the Dunn’s for many years as fellow competitors and look forward to working with Hall of Fame Crew Chief and former driver, Big Jim Dunn.”