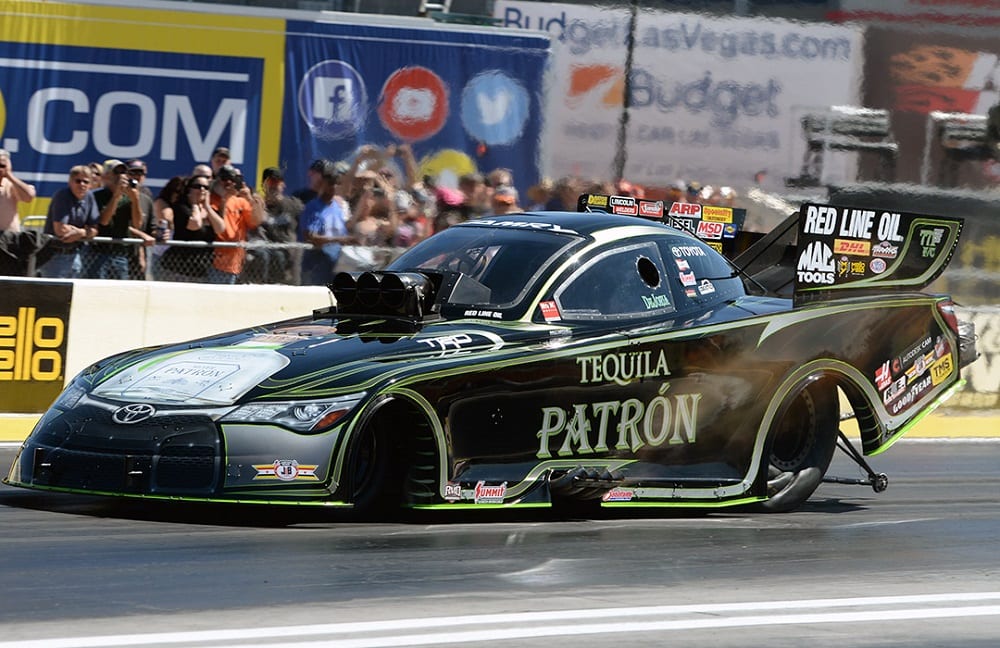 The 2016 NHRA Mello Yello Drag Racing Series has been a roller-coaster ride for Alexis DeJoria and her Tequila Patrón Toyota Camry Funny Car team, but they are determined to finish the season strong.

At the most recent event, the NHRA Toyota Nationals at The Strip at Las Vegas Motor Speedway, Team Patrón elected to not compete in Sunday’s elimination rounds. The difficult decision followed an incident that occurred on Saturday’s third round of qualifying. Past the finish line, DeJoria experienced a series of mechanical malfunctions that caused her Tequila Patrón Toyota Camry to careen uncontrollably across the race track and make contact with the left retaining wall. DeJoria’s head whipped hard into the left roll cage head pad as a result of the collision. Fueled by adrenaline, DeJoria exited the vehicle unassisted and initially felt fine. Not until later that evening did she begin to feel the effects of the high-powered impact, waking up the next morning with concussion-like symptoms.

Always a fighter, DeJoria had her heart set on racing, but after consulting with her crew chiefs, the team made the difficult decision to withdraw from the race and focus on closing out the season strong at the Auto Club NHRA Finals in Pomona, California.

Upon returning to her home in Austin, Texas, DeJoria was evaluated by medical professionals at Texas Sport and Family Medicine and was diagnosed with a concussion. DeJoria’s treating physicians ruled her out of the final event of the 2016 season.

“I underwent a series of cognitive tests and the doctors diagnosed me with a full-blown concussion that required me to step away from the seat for the time being,” said DeJoria, who has already had to miss two other races earlier in the season due to a fractured pelvis, also caused by a side-impact crash.

“It takes two weeks for these symptoms to subside and even then, because of the trauma from the concussion, it would be unsafe for me to race this weekend. To go out and get behind the wheel of a 10,000-horsepower race car with its high g-forces and the possibility of tire shake, would just be too traumatic for my head in its sensitive state. I’ve never been a quitter and never will be, but I must accept my fate and sit this last race out.”

The news was a devastating blow to DeJoria who desperately wanted to close out the year on a positive note with her team. Despite not being able to compete, DeJoria still wants to see her Patrón Toyota Camry in the Winners Circle before the year’s end. DeJoria consulted with Kalitta Motorsports patriarch Connie Kalitta and her father, John Paul DeJoria. The trio decided to bring in a substitute driver for the final event of 2016.

“A lot has happened this year. We started off strong with a win and a No. 1 qualifier right after. It’s been a roller-coaster ride of ups and downs, with the downs being pretty severe- a concussion in Denver, a pelvic fracture in Sonoma and then another concussion in Vegas. It’s been a very trying year for our team. I had a discussion with my father and Connie Kalitta and we all agreed that we thought it would be really wonderful for my team to end on a positive note, and finish the year out. We decided to have someone fill the seat and take our beautiful Patrón Camry down the track at the World Finals”

Jeff Arend was chosen as the ideal replacement. Arend drove the Kalitta Motorsports DHL Funny Car during DeJoria’s rookie season and worked alongside current DHL Funny Car pilot Del Worsham to assist DeJoria in getting her Funny Car license in 2011.

“I’m extremely honored and excited to drive the Patrón Toyota Camry in Pomona,” said Arend, who resides in nearby La Verne. “I look forward to representing Alexis and Patrón, and hopefully put this car in the Winners Circle in front of my family and friends. Thank you to Alexis, John Paul [DeJoria] and Kalitta Motorsports for this opportunity.”

Doctors have ordered DeJoria to abstain from flying until she has experienced a full recovery. While she cannot physically be at Auto Club Raceway at Pomona, she will be there in spirit and is counting down the days until she can get back behind the wheel of her Tequila Patrón Toyota Camry and begin her campaign for the 2017 NHRA Mello Yello Drag Racing Series Funny Car Championship.

“It’s going to be hard for me not to be there but I’m thinking long term. I need to get myself healthy and focus on coming back strong next year,” said DeJoria, a four-time Funny Car winner.