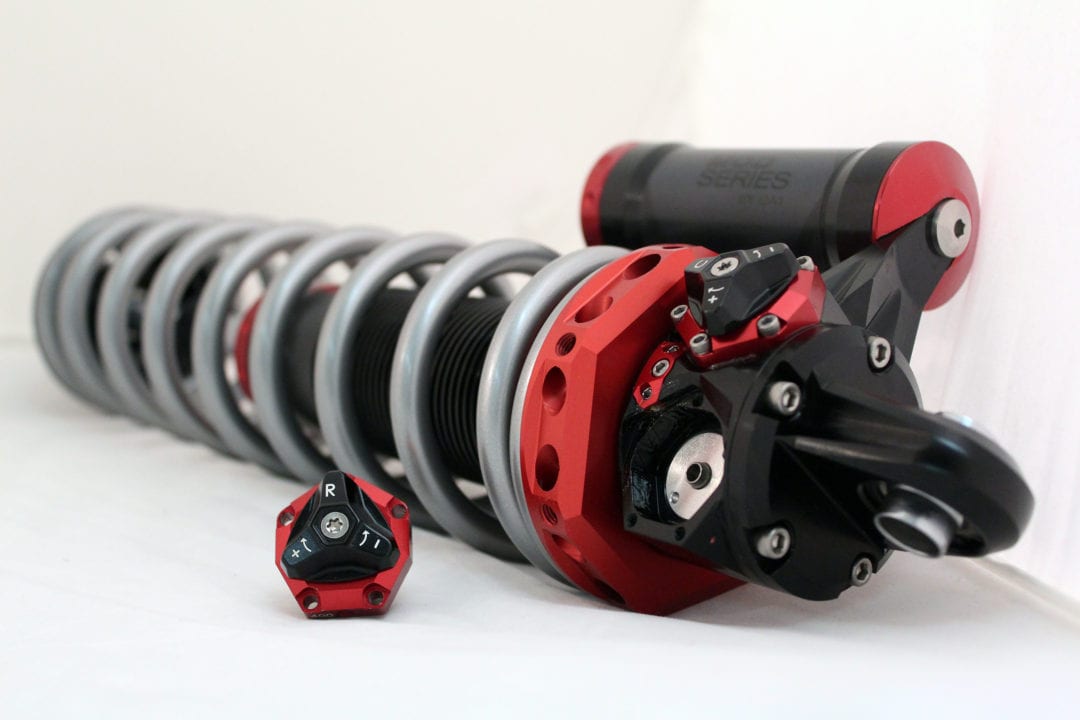 A lot was on the line for Lakeville, MN-based QA1 in the fall of 2018. Of course QA1 is well-known for making high-performance suspension components, rod ends, drive shafts (including their highly-regarded new carbon drive shafts), and more, but their next big product – the first and only on-the-car revalveable shock – was years in the making and had required extensive research, testing, and design refinements. It was a significant investment in time and resources for the entire QA1 team. 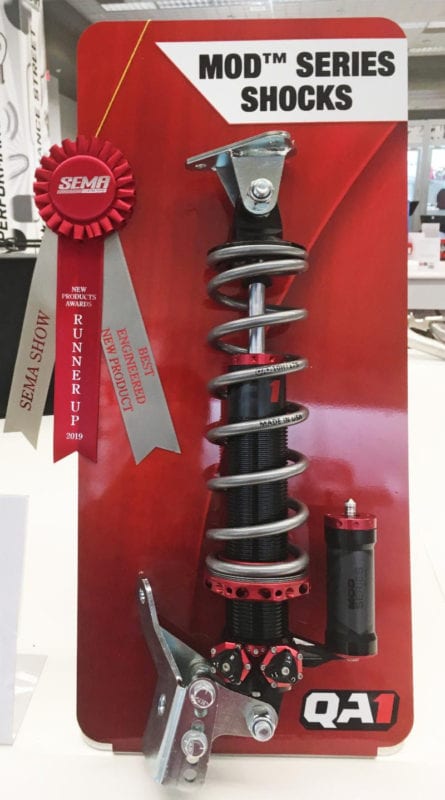 Now, several months after the product launch, that investment has indeed paid off with an overwhelmingly positive response from customers and industry insiders alike. QA1’s MOD™ Series Shocks – fully adjustable, MOD™ular shocks for drag racers from street to strip – earned runner-up honors in both the Best Engineered New Product and Best New Product in Performance–Racing categories at the 2018 SEMA Show.

The accolades are well-earned. QA1 MOD™ Series Shocks are drawing significant interest and broad appeal based on what the company terms as unprecedented on-car adjustment capabilities. Incredibly, racers report that these shocks perform comparably to many of the more expensive shocks, but at a lower price. Staying true to who QA1 is – where Quality and Affordability are number 1.

“We didn’t settle for anything with this whole project. We have total confidence in it,” MOD™ shock technician Tim Anderson said. “Seeing the public’s reaction at the trade shows, watching people look at it and ask questions, it’s really gratifying. We have confidence in it and its performance, and its ability to satisfy what the drag racer needs.”

The new MOD™ Series Shocks from QA1 present a new wealth of options in adjustability. The MOD™ name originates from its modular design, while its innovation lies in the fact that someone can tune for any track condition. They can be completely revalved – without removing the shock from the car – in minutes.

“The big advantage is the ease of adjustment on it,” Anderson said. “If you can adjust something and get it to perform better, that’s where you get your biggest gains. There are two adjuster knobs for two bleed adjustments – one for compression, one for rebound – so you can actually fine-tune and tweak it. There are bleed adjustments to work within that range, so there are no gaps in the dampening. With the MOD™ Shock you’re going to get to that shock point quicker so you can focus on other areas of the vehicle.”

The technology means changing valve characteristics to large degrees without disassembling the shock. This is a significant breakthrough, putting QA1’s MOD™ Series Shocks in unprecedented territory. For the drag racer, it provides a wide range of options, making the process of tuning much faster and easier. How’s that possible? Anderson continues, “The shock has modules on it, which have adjustor knobs. We offer a soft, medium and firm module. You can remove the Module that comes with the shock by removing just five bolts that hold it on, pull off the Module and put in a different one for a different range of adjustments and go from there. You’re not limited to a certain range by just one shock.”

Indeed, the secret to the shock’s elegant functionality lies in the MOD™ Series QuickTune Technology valve packs. Users can choose from three available valve pack options – Soft (50-350 lbs), Medium (100-650 lbs, included), and Firm (375-1100 lbs). With just the MOD™ Series Shock and the valve packs, it’s like having a trailer full of shocks with you at the track. The medium valve pack comes standard, providing the optimal setup for many applications, allowing for quick adjustment from street to strip.

According to Anderson, the MOD™ Shocks represent a considerable step forward in shock development. “It’s really impressive how well the interchangeable modules turned out,” Anderson said. “To be able to revalve your shock with a different valve pack and get it in a different range without the hassle of having to take the shock apart (and get all full of oil), perform the revalve, put it back together, and bleed all the air out is amazing. With the MOD™ Shock it’s just the five bolts holding it in to remove it, then put a different valve pack in. It’s definitely a milestone in shock development. That’s the biggest wow factor of the shock.”

QA1 also redesigned the spring adjuster nut for the MOD™ Series Shocks, making it easier to adjust ride height. The shock is available in a piggyback or remote canister, allowing for maximum flexibility with nearly every chassis configuration.

“It’s not just the ease of adjustment that makes this perform,” Anderson said. “There are internals designed to make the shock perform better and be more consistent. Plus we’ve done extensive durability testing on it, the whole shock and each individual part in the shock. Durability and consistency are two of the major things we focused on, along with all the other features that it has. You’re going to see performance right out of the gate.”

The base eyelet is indexable, which allows you to remove the eyelet and turn to a different direction so the adjuster knobs are more accessible. It allows for an uptick in performance and consistency, meaning no gaps in shock dampening and range in your shock adjustments.

But Anderson again goes back to overall consistency, noting all the innovation would be for naught without the shock’s ability to perform when needed, no matter the conditions.

“To make a drag racing shock repeatable and predictable with change goes a long way when you’re at a track,” Anderson said. “If you’re second-guessing your shock changes, that can really make it difficult to know if you’re making the right changes. With MOD™ Shocks you’re going to know that the changes you make are working the way they’re supposed to. They’re going to be consistent from one shock to the other.”

To help with that, QA1 provides a detailed instruction sheet with the shocks, breaking down how to adjust, when to adjust and what to adjust, all done in a manner that is easy to follow.

Anderson and his team put extensive work into that piece of the project, again hoping to make the process as simple as possible for the user. It’s part of a progression that took years to perfect, but Anderson and QA1 wanted to make sure every aspect was covered. It made for a painstaking process at times, but Anderson is confident the end result made it more than worth it.

“The durability we’ve found in testing is really going to set the racer’s mind at ease knowing that you do have the best product you can have on there,” Anderson said. “It was incredible watching it develop. It took years to get it to where it is. We couldn’t be prouder or more excited about to be giving drag racers a new level of adjustability and performance with the new QA1 MOD™ Series drag racing shocks.” 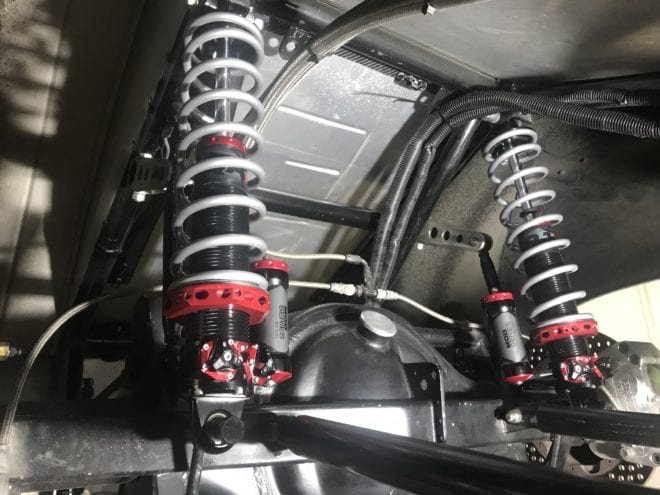