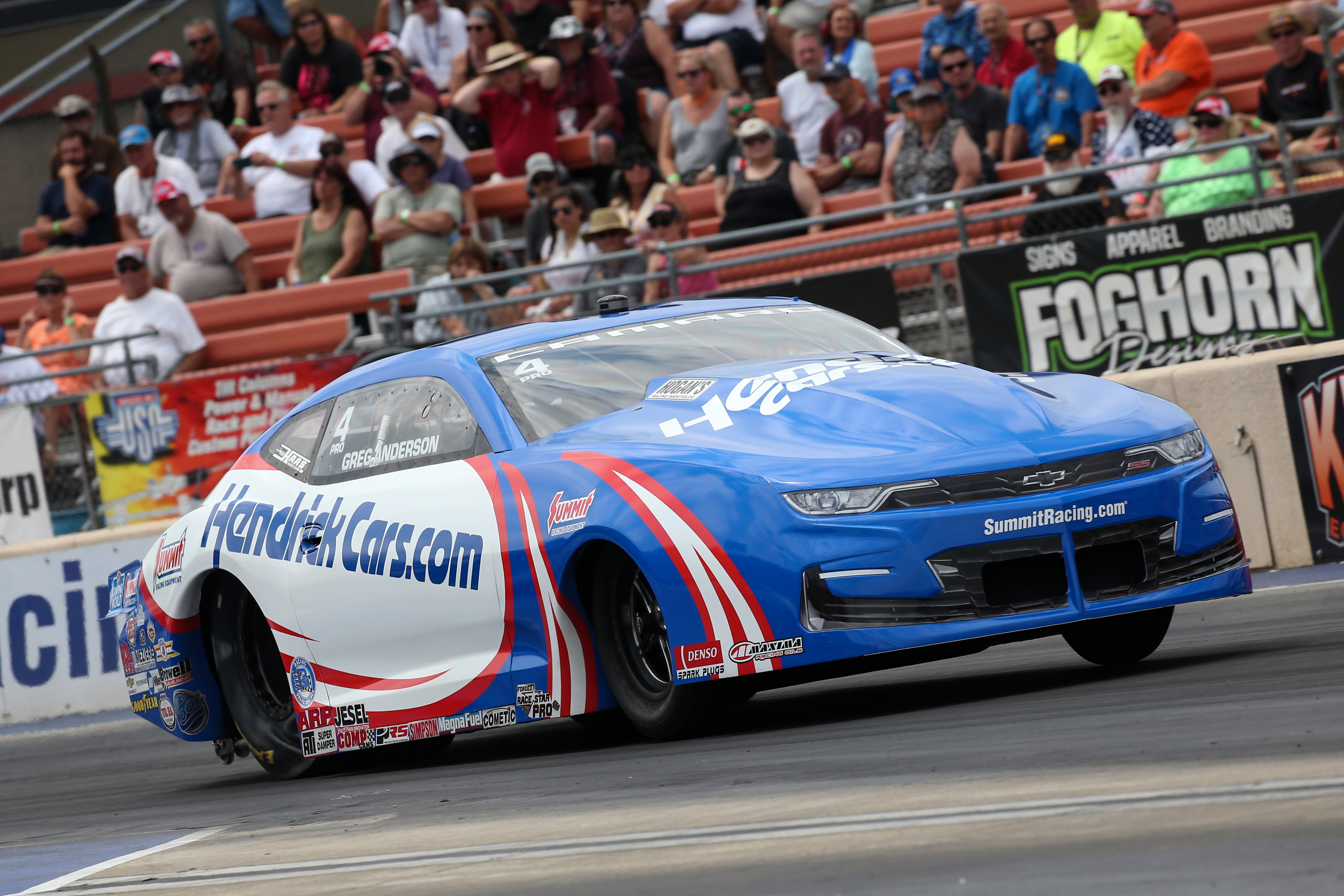 No one wants to be in the lane opposite from Greg Anderson right now, not a single soul. The 96-time national event winner and four-time Pro Stock world champion is stronger and sharper than ever, and his HendrickCars.com Chevrolet is a racecar more qualified than that of anyone in the class.

That combination proved nearly lethal this weekend at the 14th annual Summit Racing Equipment NHRA Nationals, but the class dodged a bullet as luck had a say in the matter, and Anderson just missed tying the record for the most wins ever in the history of the category.

Anderson has claimed the pole in his well-prepared HendrickCars.com Chevrolet Camaro in six of the first seven races of the 2021 NHRA Camping World Drag Racing Series, and on Sunday at Summit Motorsports Park, the No. 1 qualifier extended the points lead that he’s held all year long with his fourth final round appearance in the ultra-competitive class.

The KB Racing-powered driver had low elapsed time every round on Sunday in Norwalk, starting with a 6.629, 207.27 to leave Fernando Cuadra behind in round one, a 6.640, 206.99 in his second-round meeting with Val Smeland, and a 6.627, 205.79 in his semifinals defeat of KB Racing teammate Matt Hartford, which sent him ahead to the 162nd final round of his esteemed career.

In the final at the Summit Racing Equipment NHRA Nationals, Anderson was just a hundredth of a second away from the 97th victory of his career. His opponent, Erica Enders, red-lighted at the last race in the second round but got the win light this time with a fortunate .005-second reaction time paired with a 6.606-second pass at 205.44 mph. Anderson was a respectable .030 at the tree and recorded low elapsed time of the entire event with his 6.594, 206.20.

“I’ve been snake-bit the last few races, but I’m proud of this team and how everybody has kept a positive attitude and worked so hard to keep us competing at this level,” said Anderson. “I’m even proud of the way I drove today. It was a great drag race in the final, and she came up with what she needed when she needed it. We’ll move on. We have a great chance to tie the record, and who knows, maybe even set a new one.

“I’ve never quit in my life, and I never will. I’m going to get this deal done; I guarantee it.”

The next event on the 2021 NHRA Camping World Drag Racing Series schedule is the NHRA Sonoma Nationals in Sonoma, California, July 23-25.