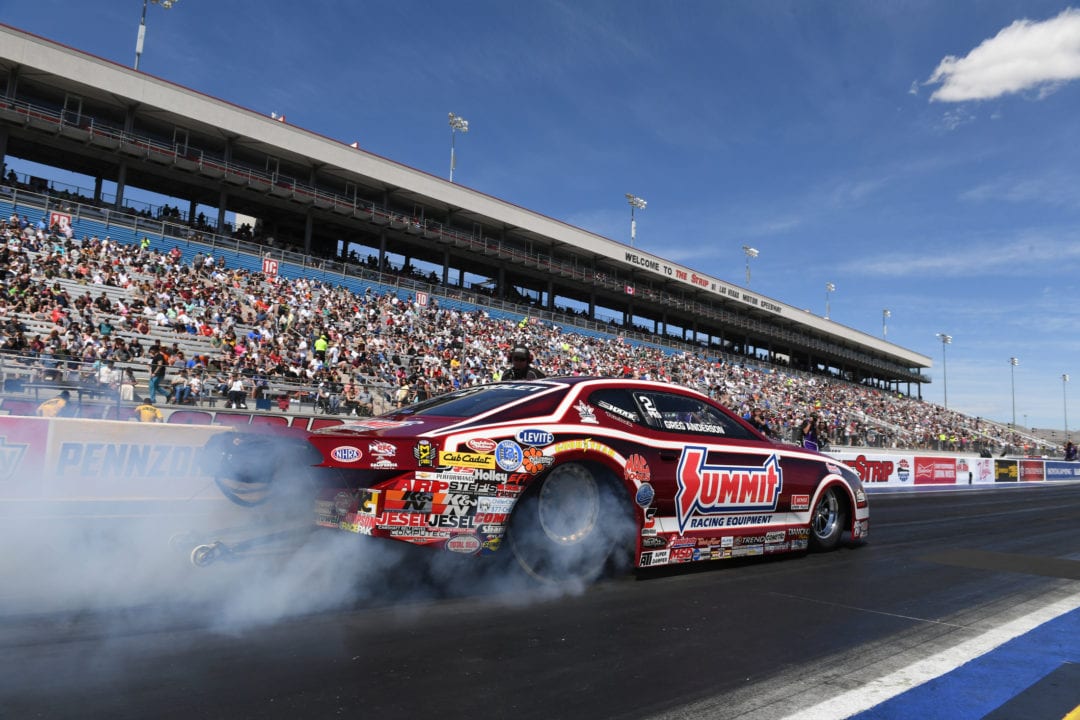 Anderson’s 6.731-second pass at 205.47 mph in his Summit Racing Equipment Chevrolet Camaro bested the defending world champion Bo Butner who red-lit in the final round of the specialty race to secure the $50,000 prize.

Anderson also secured his second No. 1 qualifier of the season with a 6.669 at 206.45 run that stood strong from the weekend’s first round of qualifying on Friday.

“It’s an honor to race for that K&N check, they have been great supporters of this class for years and it definitely gave me a confidence boost heading into race day,” Anderson said. “This is two weeks in a row I’ve gotten a No. 1 qualifying position and I know I have the car, crew chief and team to turn things around.”

He opened the challenge as the No. 1 seed and outran Vincent Nobile and Drew Skillman to advance to the finals. It was Anderson’s seventh career victory and third consecutive in the Pro Stock bonus event. Anderson is set to take on Joey Grose, Vincent Nobile and Erica Enders in the first round of eliminations on Sunday.

In other racing, Tony Schumacher (Top Fuel) and Courtney Force (Funny Car) secured the No. 1 qualifying positions in their respective categories at the fourth of 24 events on the 2018 NHRA Mello Yello Drag Racing Series schedule.

Schumacher moved into the top spot with his 3.765 run at 328.46 in his U.S. Army dragster during the fourth qualifying session. This is the 86th No. 1 qualifier of his career and second of the season after also locking down the top spot in Phoenix.

“It was warmer out than we expected but the track is better than our grip meter was saying, and we made the run that we expected to in that final pass,” Schumacher said. “I’m comfortable racing with this team and at this track, and we are going to come out and try to win tomorrow against some tough competition.”

Schumacher will face off against Steve Chrisman, Scott Palmer and Terry McMillen in round one of eliminations.

Teammate Antron Brown qualified second in Top Fuel after his 3.772 at 324.83 in his Matco Tools dragster during the second round of qualifying, while defending Top Fuel champion Brittany Force is third headed into Sunday.

In Funny Car, Force took home the top qualifying position after driving to a 3.927 at 326.40 in her Advance Auto Parts Chevrolet Camaro during the fourth qualifying round. She locked in her second No. 1 qualifier of the season and the 19th of her career.

“We’ve had some decent passes throughout qualifying, but we kept it on all eight cylinders in that final round and had a much more solid pass,” Force said. “It’s great to be out here at a track where the crew chiefs are really challenged but are able to really show their knowledge over the course of the weekend.”

Force will match up against Jim Campbell, Cruz Pedregon and Jonnie Lindberg when eliminations get underway.

Tommy Johnson Jr. enters Sunday second in Funny Car qualifying with a 3.932 at 318.84 in his Make-A-Wish Dodge Charger R/T, while J.R. Todd qualified in the third slot.

Eliminations for the 19th annual DENSO Spark Plugs NHRA Four-Wide Nationals will begin at noon on Sunday, as the four-wide racing experience continues for the first time for fans on the West Coast. Watch the action live on FOX Sports 1 at 6 p.m. ET.