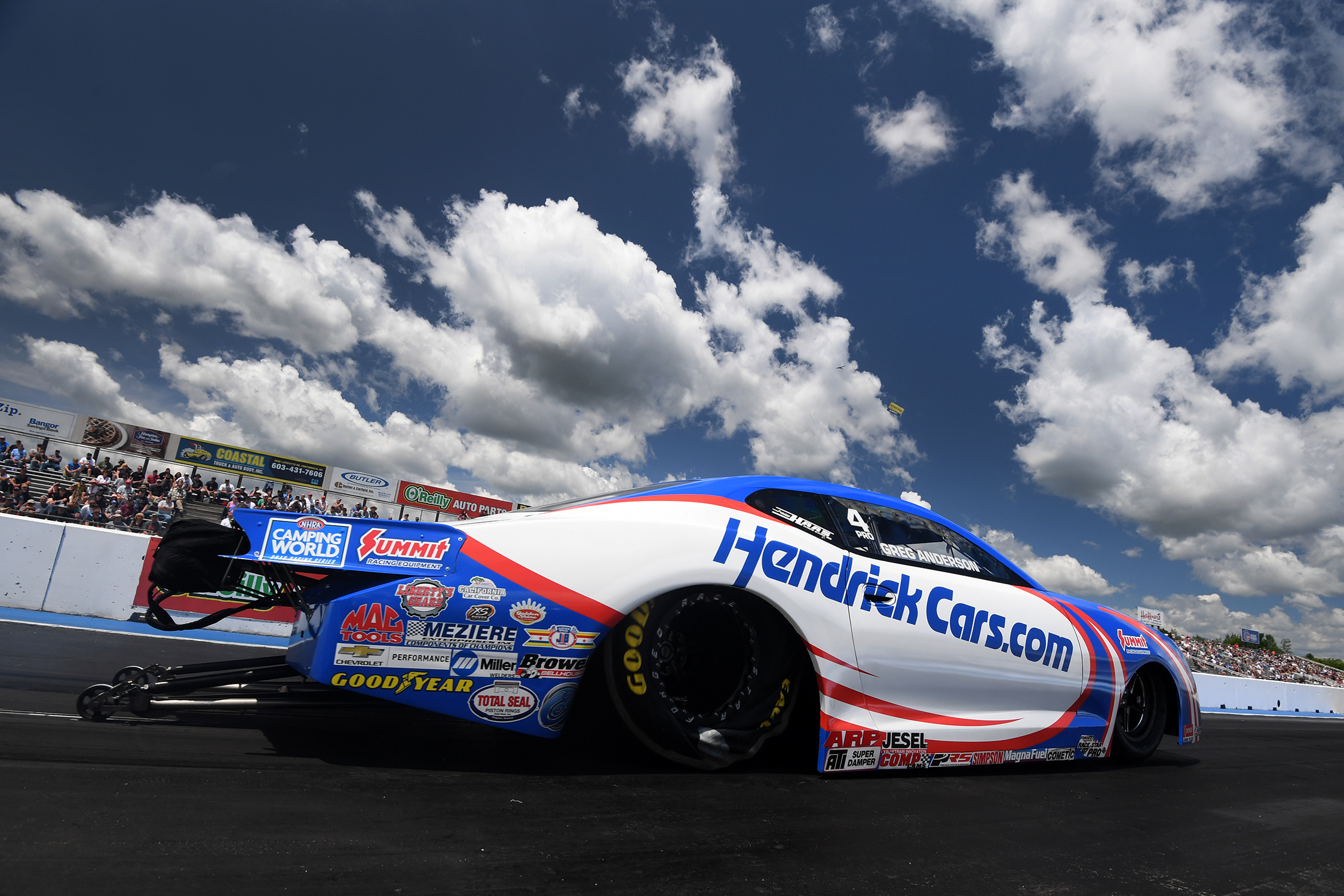 It is widely accepted in the NHRA Camping World Drag Racing Series that Greg Anderson is one of the most competitive drivers in history, and that mentality has served the four-time world champion well over two decades behind the wheel of a KB Racing Pro Stock car. At this weekend’s TascaParts.com NHRA New England Nationals presented by Bandero Premium Tequila, Pro Stock points leader Anderson came within inches of reaching a historic milestone but saw it slip away by three-hundredths of a second – and he took the near miss to heart.

“This is not the outcome that we wanted here this weekend. My HendrickCars.com Chevrolet Camaro was so good, but I didn’t get the job done, and yes, I take that personally,” said Anderson, who reached the 161st final round of his career but forfeited the trophy to young Aaron Stanfield.

The 96-time Pro Stock winner came to New England Dragway with history on his mind. He’s claimed two wins so far this season, and one more will place him in a tie with Warren Johnson as the most winning driver ever in the category. Anderson had more than hope, he had a machine that was fully equipped with some of the best horsepower in the business.

The HendrickCars.com Chevrolet Camaro was an absolute beast throughout the weekend, and Anderson claimed the 111th No. 1 qualifier award of his career – a monumental number that is third-most of any Professional driver in NHRA history – to set the stage for a positive outcome on Sunday. It was his fifth No. 1 qualifier award in the six races that have so far been contested this year.

But an unusual and unfortunate fact at New England Dragway is that a Pro Stock No. 1 qualifier has never gone on to win the race, at least not in the history of the NHRA New England Nationals. Whether one is superstitious or not, that fact remained true after eliminations were complete.

Anderson had one of the quickest cars nearly every round, but in the final, he allowed his opponent a bit too much breathing room, and it bit him at the finish-line stripe. The seasoned racer was out of the gate with a .066-second reaction time to his challenger’s .037, and it was Stanfield with the win light on a 6.576-second pass at 209.88 mph to a 6.577, 209.92.

“I’ll be honest, this is not a good feeling, but the only thing we can do is learn from it and do better next time. The good news is that our HendrickCars.com Chevrolet Camaro is the best race horse out here,” said Anderson. “It’s hard to smile right now, but a day like today just drives you to do better. I’m definitely looking forward to redemption.”

The next event on the 2021 NHRA Camping World Drag Racing Series schedule is the Summit Racing Equipment NHRA Nationals in Norwalk, Ohio, June 24-27.