In the span of a few hours, Richie Crampton’s season took a sudden turn at the Mello Yello Countdown to the Championship opener. Now the Top Fuel veteran is excited to see if he can keep the momentum rolling at this weekend’s eighth annual AAA Insurance NHRA Midwest Nationals at World Wide Technology Raceway at Gateway.

Crampton won the first event of the NHRA Mello Yello Drag Racing Series’ six-race playoffs, immediately throwing his name into the championship conversation in his 11,000-horsepower DHL dragster. The stop in St. Louis is Crampton’s next opportunity to show that he’s a legit title contender, and the win has certainly sent a jolt of confidence through the entire Kalitta Motorsports team. He’s now fifth in points, riding high at the most important time of the year.

“I’ve always had the utmost confidence in my team, but it does change the dynamic and outlook of the Countdown,” Crampton said. “We try to win every weekend, but seeing we have a real shot at it, it just makes everyone focused a lot more. Not that they weren’t already, but in a positive way, it just really makes it more real and more exciting. I’m enjoying it.”

Steve Torrence (Top Fuel), Robert Hight (Funny Car), Tanner Gray (Pro Stock) and Matt Smith (Pro Stock Motorcycle) were last year’s winners of the event that will be televised on FOX Sports 1, including live final eliminations coverage starting at 2:00 p.m. (ET) on Sunday, Sept. 29. It is the 20th of 24 races during the 2019 season and Crampton is seeking his first St. Louis win.

The triumph at Maple Grove Raceway was the Australia native’s first win outside of Gainesville since 2015, a year when Crampton finished third in points. He won at Gainesville in 2018, but couldn’t find the winning combination the rest of the year. Crampton and his team, led by legendary team owner Connie Kalitta and assistant crew chief Kurt Elliott, won Gainesville again this season, but had struggled to get another win. Crampton fell in three straight first rounds before the playoffs, starting in ninth, but all of that went away with four impressive rounds in Reading. 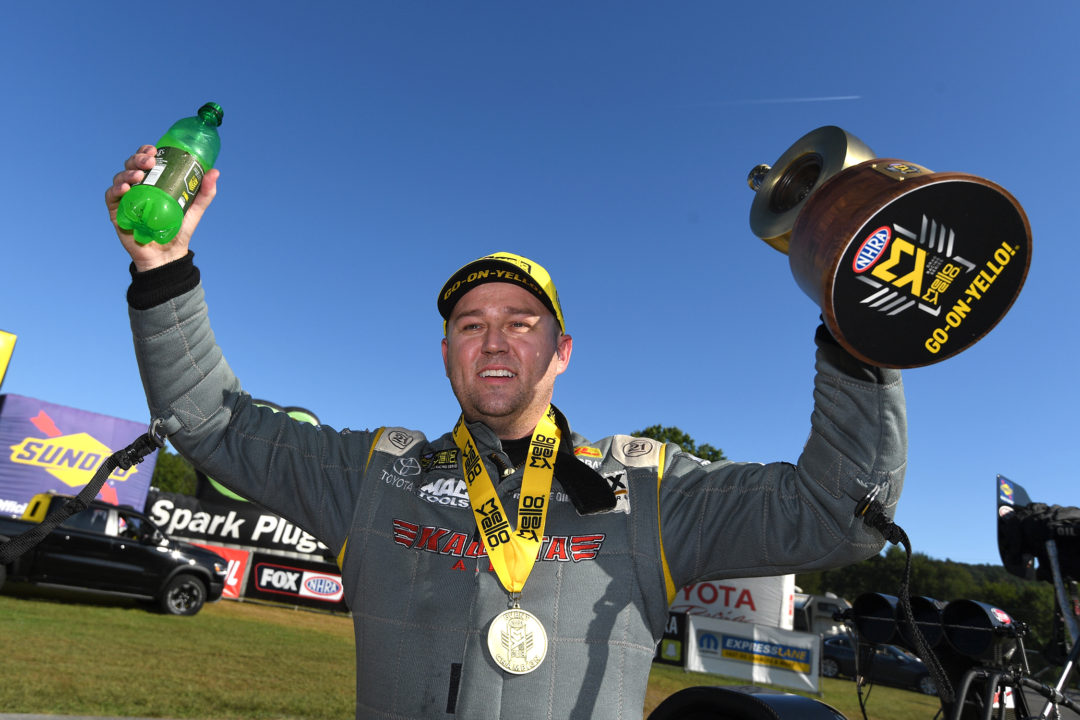 “You can really only worry about yourself,” said Crampton, who has 10 career Top Fuel wins. “It’s going to take care of itself. At the end of the day, you don’t have the opportunity to race all the contenders in the first round at the next race. To me, it’s key that we can continue to keep moving forward. Winning races is the ultimate goal, but at the very least going a couple rounds each weekend. Nobody else is going to help you as much as you can help yourself.”

Crampton knocked off Kalitta Motorsports teammate Doug Kalitta in the final round at Maple Grove, but Kalitta took over the points lead from Steve Torrence, the reigning world champ who lost in the first round. Crampton is now just 54 points back of Kalitta heading into St. Louis, but the likes of 2017 world champ Brittany Force, Antron Brown, Leah Pritchett, Clay Millican and Mike Salinas are within title reach as well. That ups the ante heading to St. Louis, but Crampton is hopeful that brings out the best in his team and his driving again this weekend.

“We’ve got to continue to make good runs in qualifying and have a real solid four runs of information to work off of for raceday,” Crampton said. “I have every bit of faith in Connie and Kurt, and my team if we get some good runs under our belt, regardless of where we qualify, it will equate to round wins in St. Louis. It’s one of those races where the fans really get behind the race. The Midwest fans are great, so it’s going to be another good one and I’m really looking forward to it.”