Marty Robertson is used to overcoming adversity, which is why he’s enjoyed jumping into this immense Pro Stock challenge so much.

From making his first full pass to getting licensed to making his Pro Stock debut, Robertson was motivated to get it done. Next up on the list is qualifying for his first NHRA Pro Stock race, something he’ll get a chance to do at this weekend’s NHRA Arizona Nationals at Wild Horse Pass Motorsports Park.

“It’s a commitment, it really is,” Robertson said. “My whole life has been about overcoming challenges. That’s what motivates and drives me. It’s definitely exciting, but all of this is humbling and overwhelming as well.”

Robertson didn’t qualify at his professional debut in Pomona, as his best run of 6.719-seconds at 207.50 mph in his Curing Kids Cancer Chevrolet Camaro wasn’t quite enough in another stout Pro Stock field.

But it was hardly a lost weekend for the class newcomer. Robertson watched his Elite Motorsports teammates work – including Jeg Coughlin Jr. rolling to an impressive victory – met with fans and got the first-race jitters out of his system. With that in mind, Robertson is only looking forward as he heads to Phoenix.

“When I arrived in the pits on Thursday, I was surrounded by all of my heroes and it’s a whole new set of nerves setting in,” Robertson said. “It got to me a little bit, and it definitely had an effect on me at that race. I underestimated what it was like to be in front of a national event crowd and it was humbling. But I think I got the nerves out of the way.” 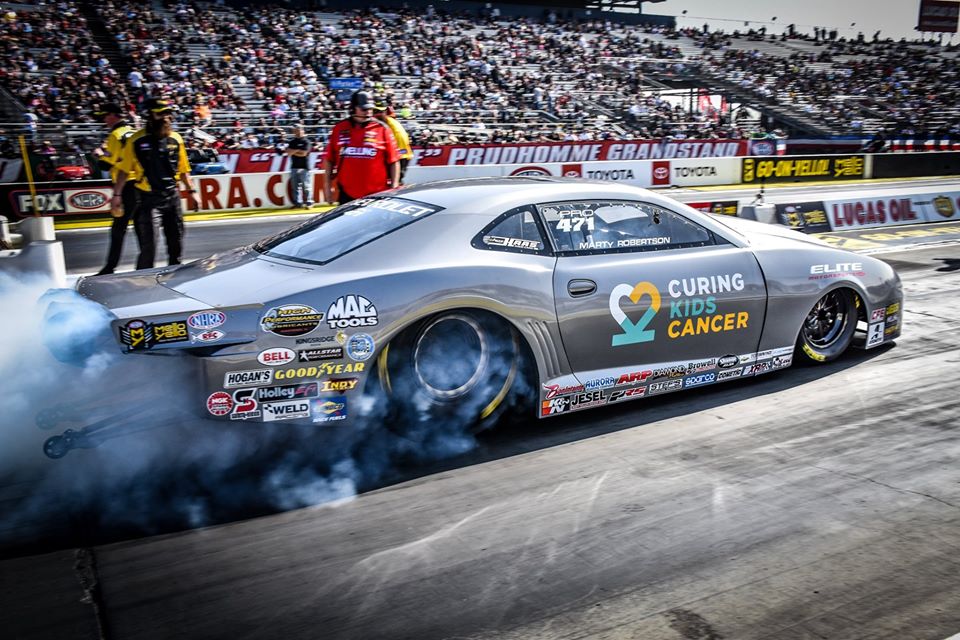 The former Radial vs. the World standout enjoyed seeing familiar faces in Pomona, and he’s been overjoyed with the outpouring of support he’s received since going down the Pro Stock path.

It’s certainly not an easy class to jump right into, but Robertson has made considerable improvements and he’s expecting to see more this weekend.

He was impressed with the level of professionalism from Elite Motorsports and its drivers, displaying a work ethic that continues to motivate Robertson. If it leads his first trip to eliminations in Pro Stock, Robertson will consider that a victory in itself.

“I just want to be focused on that moment and not be worried about anything else,” Robertson said. “That applies to anything: life, business, family. You want to be where you’re at and focused on the moment, not the end. Each moment will get you to the end. But I’m just glad to be associated with this group. They’ve been so supportive and want me to be successful. And if we can qualify, that’s going to be my first victory of the season.”

Mello Yello Drag Racing Series qualifying will feature two rounds at 1:45 and 4:45 p.m. PST on Friday and the final two rounds of qualifying on Saturday at 1:30 and 4 p.m. Final eliminations are scheduled for 11 a.m. on Sunday.