The X-DRL has found an eye-catching way to bring out the “X” in the event and world championship trophies, which were revealed Mar. 30, for the first time. Additionally, the X-DRL will also have trophies for the runner-up finishers in each class, an exciting development for all potential X-DRL competitors.

The X-DRL will release further details on sponsors for the various trophies, but the massive trophies certainly add another huge positive to a 2013 X-DRL season that continues to build momentum.

The first of these head-turners will be awarded at the X-DRL’s debut event, the X-DRL Spring Nationals on April 6-7 at Osage Casino Tulsa Raceway Park. Tickets are on sale now for that event and can be purchased at 918-437-RACE or online, as well as the second race, X-DRL Thunder Valley Madness at 423-BRISTOL or online, which takes place April 26-27 at historic Bristol Dragway. 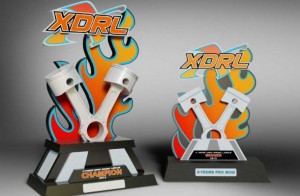 From there, the X-DRL has seven more races in its inaugural 2013 season at many of the nation’s top tracks, and these one-of-a-kind trophies will certainly be prominent at each event in the winner’s circle.

All event winners in every X-DRL class will receive a slightly smaller version of that trophy, but one that is just as striking and impressive.

“We’ve managed to find an exciting way to put the ‘X’ into these trophies and make both original and eye-catching at the same time,” X-DRL Director of Marketing Michele Beck said.

“We think the racers are really going to enjoy getting a trophy that looks as incredible as these do, and we’re just as thrilled to be awarding trophies to the runner-up competitors in 2013.”

The runner-up trophies will have an official sponsor, which will be named in the coming days, pictures and further details on those items will be released soon by the X-DRL.