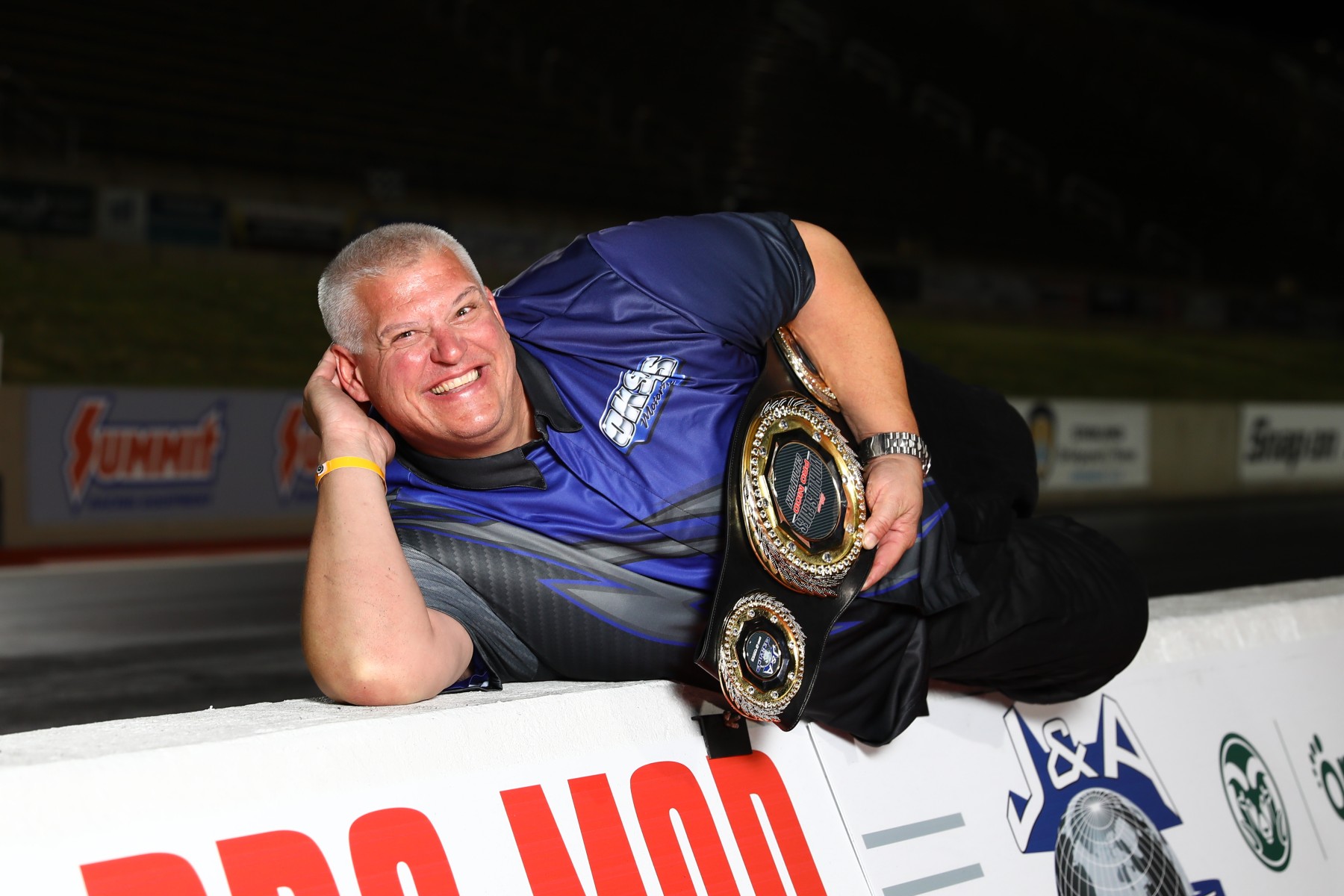 There were times when Scott Oksas thought about calling it a career. It usually happened during a frustrating stretch when an engine would blow or parts needed replaced, or the burly Californian wouldn’t find the success he wanted.

He had won races, but Oksas was still looking for that career-defining moment in his Pro Mod pursuits. He started that particular dream a decade ago, simply hoping to put together a competitive program.

But as Oksas basked in the limelight at Bandimere Speedway, doused in champagne and grinning from ear to ear with his family in tow, he finally had a win for the ages.

His career took a major turn when he added Jeff Pierce as the tuner late last year, and Oksas was downright nasty in his turbocharged RJ Race Cars Ford Shelby Mustang on Thunder Mountain. That included a winning blast of 5.882-seconds at 247.38 mph in the final round against Doug Winters to claim victory at the third annual DRAG ILLUSTRATED World Series of Pro Mod presented by J&A Service, Elite Motorsports, Big O Tires and benefiting One Cure at Bandimere Speedway.

He reeled off a profanity-laced celebration as the car came to the stop at the top end, celebrated with his team, raised the massive $100,000 check high above his massive frame, worked the microphone with jubilant excitement and soaked up every minute he could.

After 10 long years of grinding through the ups and down, Oksas had reached the mountaintop in every respect. 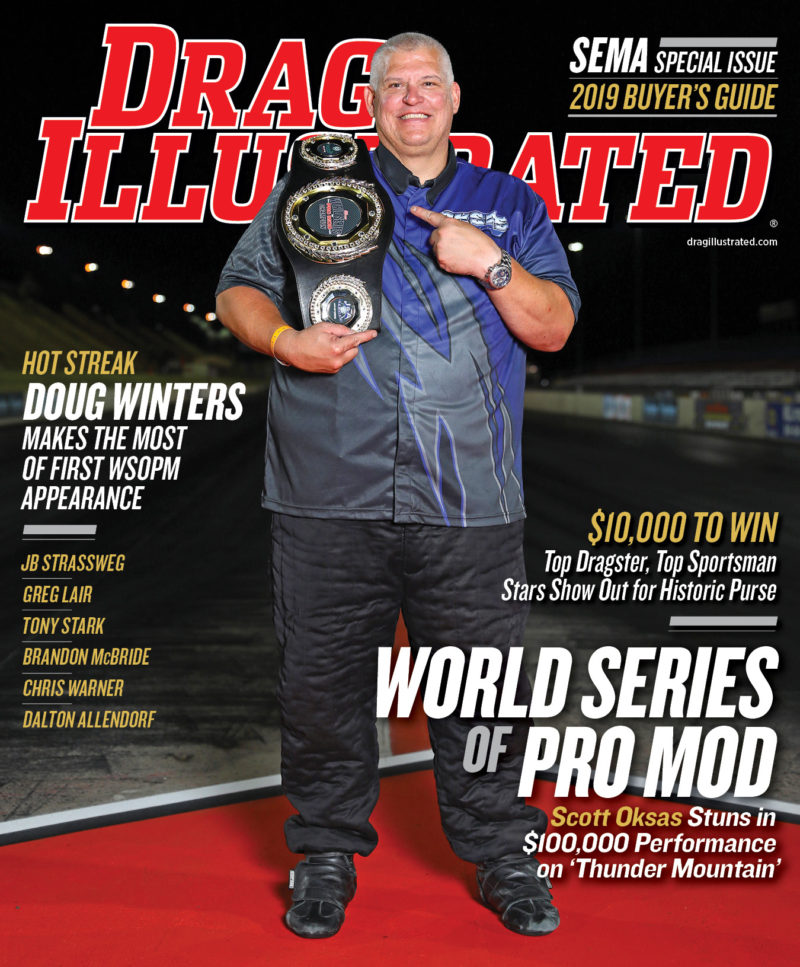 “It’s just pure excitement,” Oksas said. “This is just giant. I’ve busted my ass for 10 years doing this Pro Mod stuff, I’ve worked so hard and I can’t believe I’m standing here, I really can’t. To win this, it’s always been a passion of mine to win something like this. I can’t even describe it. It’s just overwhelming, it’s crazy.”

Just a few months ago was the last time Oksas thought about being done with racing. He blew up an engine right as the team was testing before racing at the NHRA Pro Mod event in Topeka, frustrated with more dollars down the drain.

Something kept driving Oksas, though. He couldn’t stop, believing his moment was coming. Oksas had seen the difference Pierce’s expertise had brought and he was convinced there was a light at the end of the tunnel.

He might not have been expecting a $100,000 spotlight shining solely on him, but his love of the sport – and what it meant to his family – was too much too ignore.

“Right before Topeka, I thought, ‘This is stupid. I’m spending so much money.’ But it was just determination and the love of the sport. I just love it,” Oksas said. “I would have so much more money if I didn’t do it, but I just love to do it. I’ve been racing since I was 16 and when I set my goals to do something, I have to do it.”

By the time Oksas arrived at Bandimere Speedway for the second time, things were decidedly different than his debut at the WSOPM in 2018.

He had hired Pierce to join a team that included Roger Rompal, who is the car chief, and Keith Howard, and the difference was immediate. It was Oksas’ admission that someone else needed to be making the tuning calls other than him that made the difference. 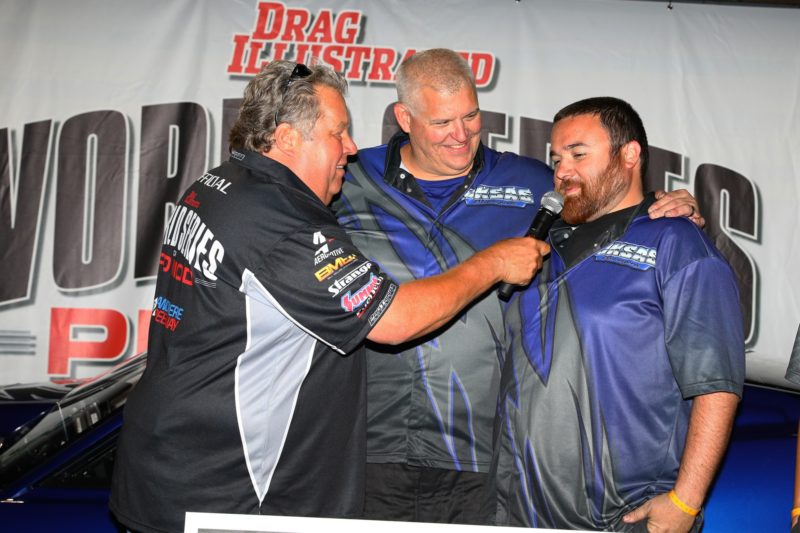 It’s been his car and his operation since day one, but the successful businessman viewed the addition of Pierce – and handing over the tuning reigns – as a smart business move.

“I install water heaters, that’s what I do. I don’t race cars for a living, but Jeff does,” Oksas said. “All of this is because of him and my guys, not me. I tried to tune it for years and years, and didn’t win anything. I just worry about driving now.”

Oksas joked they “don’t let me even touch the car now,” but he’s fine with that and that confidence was evident the moment he arrived on Thunder Mountain. He boldly claimed he was coming to win the race and the $100,000 prize, and then went and made a series of incredible passes in testing.

That set the tone for the weekend and it was on from there. Leaning against the left guardwall by the starting line on the final day of testing, the sense of satisfaction was evident. The scoreboards were off, but his face told the story.

“Things are very good,” Oksas said on the Thursday before the race. “I’m having a blast and the car is doing everything it needs to be doing. It’s a great feeling. It’s faster than it was last year already with less boost. It confirms what we’ve worked on and the package we’ve put together. It just shows we can do it. It’s an awesome feeling to have.”

That feeling only got greater during Friday’s shakedown runs, but the (unfortunate) luck of the draw gave Oksas the tenuous situation of matching up with NHRA Pro Mod points leader Stevie “Fast” Jackson in the opening round.

Some days, though, it’s just your day, and that day on the mountain was Oksas’. Jackson went red on a pass that was the quickest in history for a blower car in Denver, erasing a run of 5.932 that would have beaten Oksas’ 6.071 handily. But Oksas was cool, calm and collected on the starting line, while Jackson left early, and that’s all the momentum the Los Angeles-area native needed.

“That guy is a world-class racer and that was the most scared I’ve ever been in my car,” Oksas said. “But after that it was just sweetness. He red-lit and I knew after that we were going to do our thing and win this thing.

“That was my lucky pass of the day and I needed that. Then, Jeff took over and he literally didn’t touch it from that pass in. It was crazy. He said, ‘We’ve got a hot rod. Go send it.’ I told him no problem.” 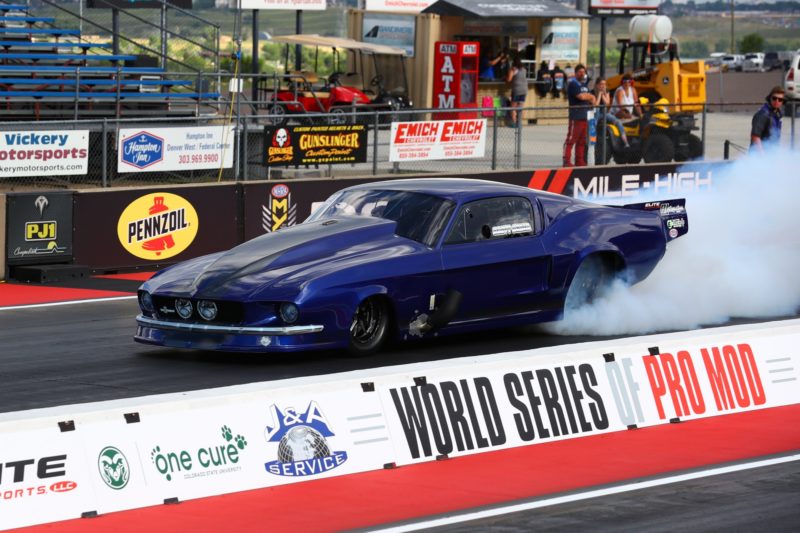 Pierce knew they had a hot rod far before that. By the second run in testing (5.96), he had already surpassed what he ran on Thunder Mountain a year ago, improving to a pair of 5.92s on Friday. By then, the entire team was beaming with confidence. After the break against Jackson, they were ready to burst with it.

“He doesn’t go into this to lose and he’s happy no matter what, and he kept telling me we were going to win,” Pierce said. “That morning I woke up and just had that feeling. We had that lucky around against Stevie, and then we fixed one problem and tried to keep it consistent. The car was just great and was straight as a string. It’s pretty incredible.”

After the run against Jackson, Oksas and his Mustang delivered one massive blow after another. Even with less boost, he put together some of the most impressive runs in WSOPM history. He went a blistering 5.863 at 247.57 to beat Rick Snavely in the second round, topping Rick Hord in the semifinals with a 5.872 at 247.79.

That set up the meeting with Winters, who went 6.012 at 231.56 to beat Terry Haddock in the opening round. Winters had byes in the next two rounds after defending champ Carl Stevens Jr. broke and couldn’t make the second-round call, but nobody could match Oksas’ pace.

“We said, ‘Let them come beat us,’” Oksas said. “You can’t ask for anything better than how we ran. It’s just a tribute to Jeff and this entire team.”

Oksas, though, was confident in the weeks leading up to the event, knowing the improvements his team has made in the past year.

Oksas and Winters posted identical .053 reaction times in the final round, but it didn’t take long for the Mustang to pull away. Once Oksas saw the win light, the celebration was on as the veteran excitedly yelled, “I just won $100,000” several times in the car – among other things – before it stopped.

“I knew I was going to be ready. We had been pulling in and lighting the beam first all night and we had a gameplan with everybody,” Oksas said. “Jeff said just keep doing our thing and we just did our thing.

“I don’t panic anymore and the run was dead straight. I saw him next to me and at the 330 I just started to pull away. I knew he wasn’t catching this turbo car.”

That ability to not get rattled marks a stark improvement in his own abilities, and is again a nod to the fact he only has to worry about driving these days.

That utmost confidence in Pierce and his team has had a direct carryover on the car, which was delivered just three weeks prior to the WSOPM in 2018.

A year later, it was a bracket car in the 5.80s in some of the toughest conditions possible for any driver, something that wasn’t lost on Oksas.

“How awesome is it to go to the mountain and run as well as we did?” Oksas said. “It’s pretty damn good. I used to think about everything. I would just be sitting in the trailer working on the laptop. Now I don’t have to do that anymore. I just practice cutting my lights. I have that trust in them and they’ve gained that trust in me to do my job. It’s about the putting the right people in charge and making it happen. That’s the key.” 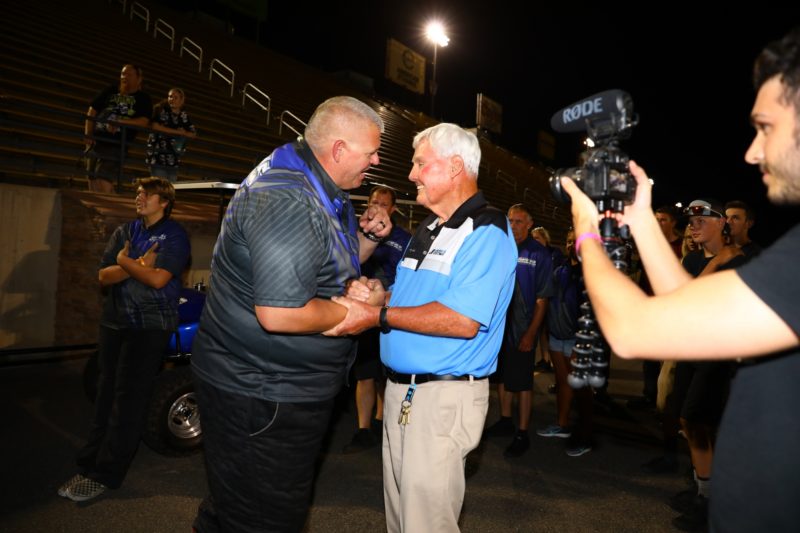 In an instant in Denver, all the trials and tribulations were worth it. Oksas compared it to one good shot on the golf course completely changing the tone for the day. Instead of one shot on one day, this was one victory over 10 years that suddenly made it all worth it for Oksas.

In truth, it’s been more than one day. He hasn’t taken the trip to Las Vegas to celebrate like he proclaimed he would leading up to the race, but Oksas has received congratulations at every turn.

That included at the U.S. Nationals, where Oksas was big man on campus – literally and figuratively. Getting that respect meant something for Oksas, who admits the moments that took place at Bandimere Speedway are still fresh in his head.

“We did it by winning all four rounds, and that’s what I love. I think about the competition we beat and that’s pretty awesome. It just shows you if you work hard, good things can happen.”

The WSOPM has reinvigorated Oksas and he’s thrilled to see what’s next. It’s a journey that will assuredly include his family, who joined him in the festive winner’s circle celebration in Denver. 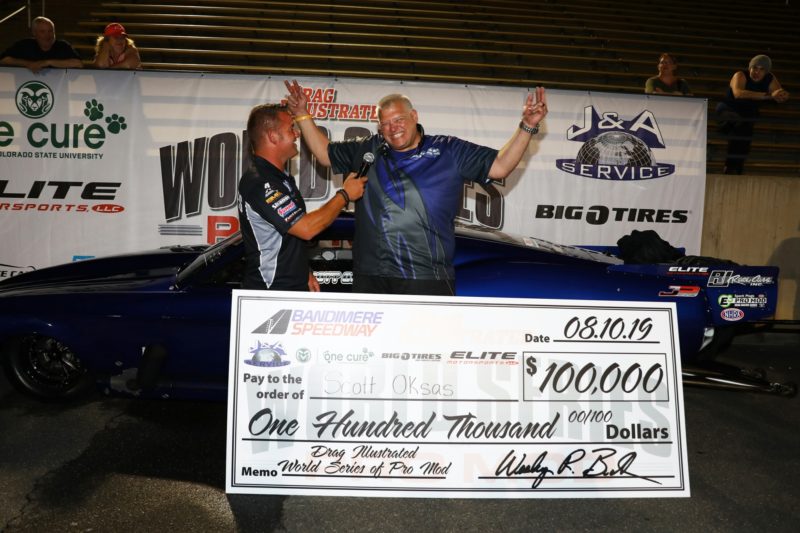 It’s made the entire process more enjoyable and he’s now preparing for his son, Joey, to eventually jump in a Pro Mod. He talked of his son possibly testing in Las Vegas later this year and Oksas is fine with him driving in competition soon as well.

It’s also possibly the next step in a sport that has meant so much to him. Oksas always knew he would find success – he just never expected he would have to traverse a mountain to do it.

“I’m a determined person. When I set my mind on something, I’m going to do it,” Oksas said. “All the highs and lows you experience, I wouldn’t change it for the world. This win, it makes everything worth it.”