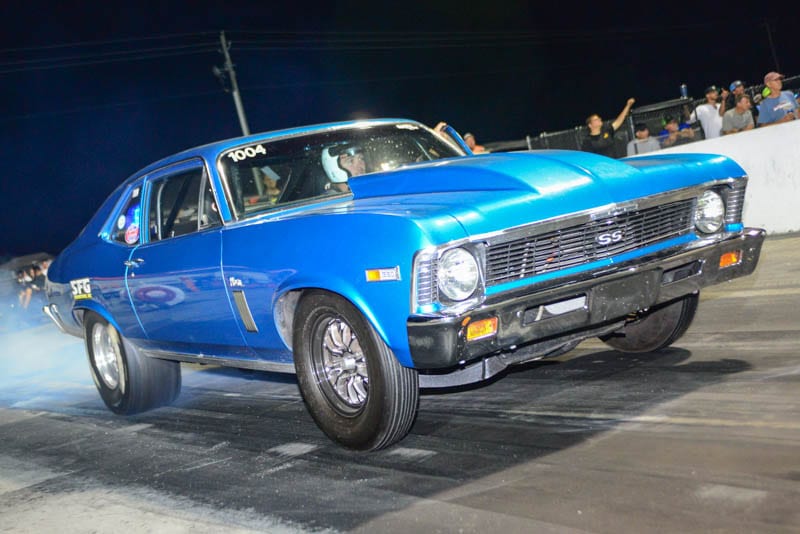 On what was the longest day yesterday at the K&N Spring Fling presented by Optima Batteries at Galot Motorsports Park, it actually ended at a somewhat reasonable hour of 11:00pm. The reason for that was each competitor yesterday was allowed a single time trial followed by eliminations. Eleven hours of eliminations ended when Gary Williams defeated John Tolisano for a $15,000 payday.

Today, only new entries received a time trial with eliminations beginning at 9:00 but the ante was upped to a $20,000 payday for one lucky winner on JEGS Thursday. Also, on tap tonight was the running of the Hoosier Tire Door Car Shootout where a randomly selected field of 32 door car racers vied for $10,000-to-win.

Each day, Wiseco has chosen to award the Golden Ticket, choosing one random racer each day to receive a free buyback into eliminations. Today’s Golden Ticket winner was Ivey Brannon who wasn’t able to parlay it into a buyback round win, but she was nonetheless thankful to Wiseco for award, as is everyone else for their support of the Fling.

Down to round six with ten cars left to enter the ladder round and the survivors were Dean Turner, Wednesday’s winner Gary Williams this time in a door car, Jordan Arnold; although Arnold lost an axle off the starting line but still won the round when her opponent went red first. They’ll be joined by William Daniels, Chris Borges, Kevin Brannon, David Wright, Chet Dragon, Dan Fletcher, Jack Ostrowski.

Coming back for the quarterfinals were Wright, Ostrowski, Williams, Turner, and Daniels with a competition bye run because his intended opponent Arnold couldn’t make repairs, leaving him still eligible for an odd car bye run of which there were two byes left; both in the quarters and the semis. 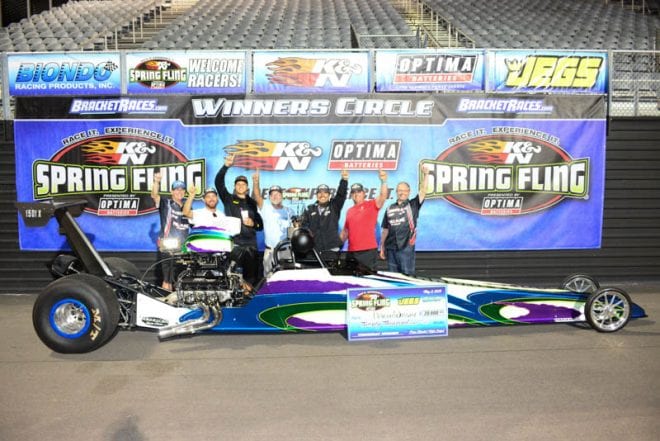 For the quarters with three door cars and two dragsters left, Wright received the bye run by virtue of his reaction time; Turner took out Ostrowski and Williams defeated Daniels. With his best reaction time of the round, Williams received the semifinal round bye to move directly to the final against either Turner or Wright, with the possibility of an all door car final. That all door car final was not to be as Turner ran out against Wright, making it a dragster versus a door car for all the bucks.

For the final, Williams left first based on his dial-in but it was Wright with the reaction time advantage and dead-on the dial with a “2” for the win. “I am speechless,” he said. “This is my first big win and I really don’t know what to say but so thankful.”

With a JEGS Thursday champion crowned, the attention turned to the Hoosier Tires Door Car Shootout, a limited 32-car field shooting for a $10,000-to-win prize. In the semifinals, Kurt Harrington defeated Brian Nolf and Paul Warwick took out Chad Axford. Two years ago, Warwick defeated all in the Super Tuesday Dragster Shootout and this year he was not to be denied in the Hoosier Tire Door Car Shootout.

With sponsorship from JEGS and Hoosier Tires, MotorManiaTV.com has been live streaming of all the action and will continue right up until the final win light shines on Wiseco Saturday. Visit www.bracketraces.com for complete results and information. 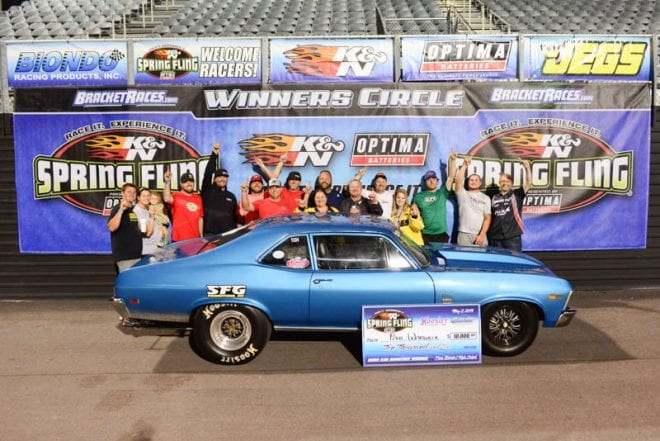