Pro 632 racers have been testing all week in preparation for the inaugural Drag Illustrated World Doorslammer Nationals presented by CTech Manufacturing. The event, which pays $10,000 to the winner in Pro 632, begins with the first qualifying session at 6 p.m. tonight (Friday).

Stay tuned to the Pro 632 Pit Report for driver features, updates and results from the Pro 632 portion of the World Doorslammer Nationals.

Wes Distefano traveled more than 1,000 miles from his home in Michigan to compete at the inaugural 2020 World Doorslammer Nationals presented by CTech. This weekend he’s competing in the C&C Pumping Pro 632 class for a record $10,000.

Prior to this weekend, the most money this class has ever raced for was $7,500 at Dragway 42 in Ohio during the PDRA Northern Nationals in 2019. Distefano says it’s nice to see the purse come up, and he hopes it will bring more racers out.

“I love to see the 632 class growing,” he says. And he knows the class is ultra competitive. He’s hoping his fuel-injected Jerry Bickel racecar, complete with a Pat Musi 632 engine, will be able to run in the low 4.20s in eighth-mile this weekend.

But even with the extra money on the line, Distefano knows the money doesn’t even come close to covering the costs.

“We’re out here doing this for fun, and for the love of the sport,” he says. “I don’t know a lot of guys out here getting rich from drag racing. Everyone wants a big win and notoriety. I think it’s about that more than the money. But, of course, we’d love to take home the money as well.”

Distefano’s been racing for about five years, and most of that time has been in the 632 class. He says since he started, he’s been able to grow his driving resume.

This is the first race of the year for Distefano. He and his wife welcomed a baby boy, Wesley Jr., in January.

Voss Has Eyes on No. 1 Qualifying Position in Competitive Pro 632

When it comes to the off-season, Dillon Voss doesn’t really know what that means. The Florida-based racer is accustomed to warmer temperatures and racetracks being open way more often during the winter months than most. This will likely come in helpful for him as he’s competing in the C&C Pumping Pro 632 class this weekend at the inaugural 2020 World Doorslammer Nationals presented by CTech. For many racers, it’s their first weekend out in a few months, but Voss was just behind the wheel of his 2016 Corvette two weeks ago at the US Street Nationals in Bradenton, Florida. 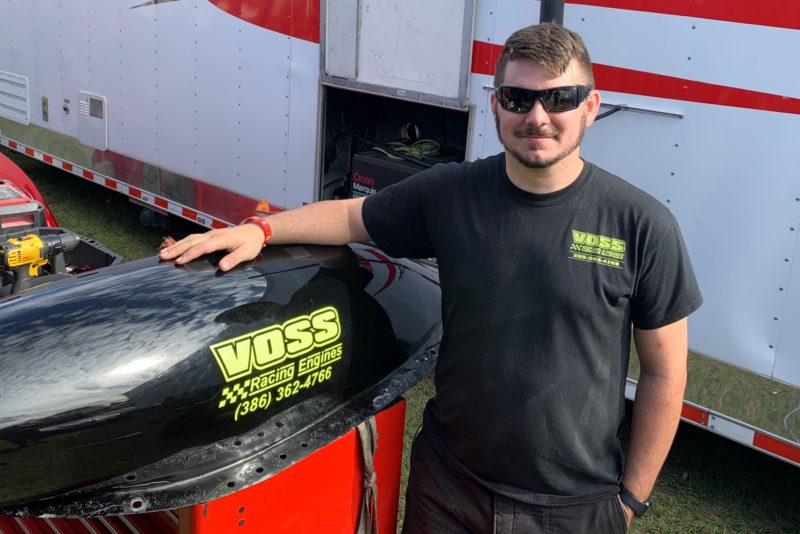 During his limited winter break, Voss said they were able to find some more horsepower in his car, which he hopes will help him take home the top prize this weekend. In addition to the added horsepower, he also has a new secret weapon: a teammate, Mike Murphy. Murphy is chasing the money alongside Voss this weekend in a car that’s pretty much identical. Voss says now they have twice the data per round, which helps them both out.

And the money they’re chasing is something this class has never seen before.

“Racing for $10,000 is great,” said Voss. “It’s the biggest payout we’ve had for this class. There’s a lot of really good cars here, it’s going to be a really good race this weekend. We’re excited.”

At that time, he had only made one pass, during which he broke a lifter. Luckily, his team caught it quickly and they didn’t hurt the engine. He said he thinks the run should’ve been in the low 4.20’s in 1/8th mile, which is right where they want to be.

“We have horsepower weather this weekend,” Voss said, with highs on Friday near 77 and lots of sunshine. Saturday’s weather looks even better for racers with a high temperature of 65 and sunny.