Kirk Wolf and the Booher Racing Top Alcohol Dragster team turned a slow start into a record-breaking weekend at last weekend’s Chevrolet Performance NHRA U.S. Nationals at Lucas Oil Raceway. Wolf drove the AB Construction supercharged dragster to a 5.300-second pass in qualifying and a 5.256 in the first round of eliminations to reset the world record for the quickest torque-converter-equipped race car.

“It felt amazing to make two strong runs,” Wolf said. “We’ve worked so hard, especially Brandon, to get the car to this point. For him to let me pilot the car and set the records, I can’t really ask for much more. We’ve shown we now have one of the most competitive cars in the class, and that we have a torque converter car that can run right there with the top clutch cars and A/Fuel cars.” 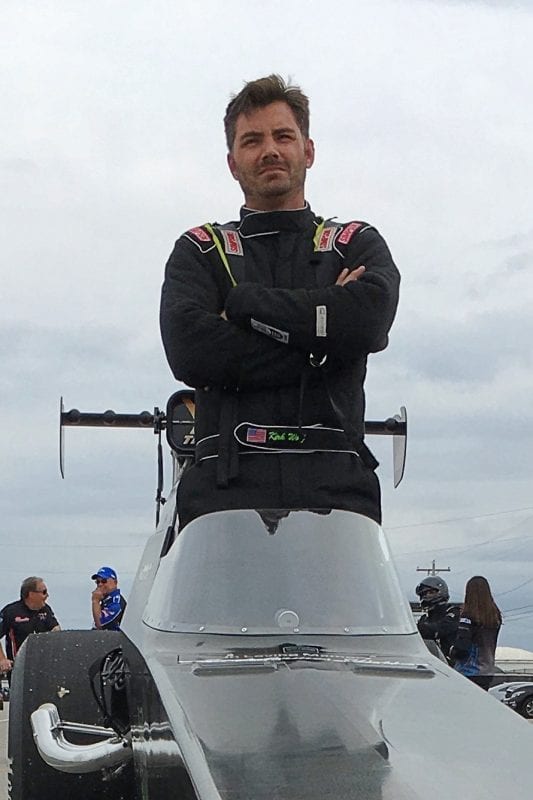 Wolf’s qualifying effort at the prestigious U.S. Nationals began with mechanical gremlins. A rare issue with the frequency on the car’s on-board radio caused the AB Construction machine to shut off before pre-staging during Friday’s two qualifying sessions. A trans-brake malfunction prevented Wolf from posting a representative run on Saturday morning. A career- and team-best 5.300 at 273.05 mph moved Wolf into the field at 11th on the fourth and final qualifying session Saturday afternoon.

“I let out a huge sigh of relief,” Wolf laughed. “The car is just making so much power. Luckily, Brandon is good at controlling the car, as far as getting it down the track under different conditions. It was a huge relief to get in the show. I went into the session thinking, ‘We have the strongest running car in the region with a win and a runner-up here a few weeks ago, and we might not qualify?’ It was a huge burden lifted off my shoulders when I saw the 5.300 time slip.”

“I can’t put into words what it means to be the first guy to run in the 5.2-second zone with a converter car. I knew the car was capable of running a 5.2 going into this season. Brandon has the power and knows how to apply it, he just had to find the right tune-up and conditions. And the thing that excites me is we still haven’t seen record-setting air yet. Indy had cool air, but it wasn’t the best. The next step is running in the teens, and I have no doubt we’ll be doing just that by the end of the year,” Wolf said.

Another mechanical issue prevented Wolf from moving on to the semifinals. The air bottle on the car, a necessary component responsible for shifting gears, was full upon entering the staging lanes for a second-round matchup with Josh Hart Sunday evening. When Booher checked the pressure gauge less than 10 minutes before firing up the supercharged engine, he discovered the bottle was empty. An impressive thrash to refill the bottle ensued, but the fix was impossible in the time allotted by NHRA officials. The team wasn’t allowed to start the car for the round, leaving Wolf and the AB Construction crew to focus their efforts on upgrading the air lines, fittings and other components for their next race in Earlville, Iowa, Sept. 8-10.

“Of course I was frustrated, especially considering everything we had been through earlier in the weekend, then something else went wrong. I’m a firm believer that everything happens for a reason, though. We definitely had a car that was capable of winning the race. I think the car would’ve run right there with Josh. The most disappointing thing is we didn’t get to show what we could’ve run. I think we’re peaking at the right time, so we’ll just jump over this hurdle and move on to the next race,” Wolf said.