Tim Wilkerson knew about the streak at the most recent NHRA Mello Yello Drag Racing Series event, just like he did last year at Royal Purple Raceway when he advanced to the final round. But with a 60-race winless streak dating back to Seattle in 2011, Wilkerson is eager to put the drought to rest.

The driver of the 8,000-horsepower Levi Ray and Shoup Ford Mustang gets his next opportunity to end the streak at the 27th annual O’Reilly Auto Parts NHRA SpringNationals presented by Super Start Batteries, April 25-27, at Royal Purple Raceway.

Wilkerson is well-aware of the near misses, close defeats, bad luck and whatever else that has kept him out of the winner’s circle for far too long, but he remains confident that the next victory, which would be the 18th in his successful career, is coming soon. 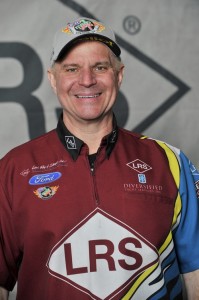 “I absolutely feel like we have a lot of momentum going and I’ve felt it building for a couple of races now,” said Wilkerson, who advanced to the final foursome at the recent Four-Wide Nationals in Charlotte.

“In Charlotte, I felt pretty good going in and basically the car did everything it was supposed to do until we hopped it up for the final round. We felt we had to roll the dice and run our best number of the weekend. Instead, we were the ones who messed up. Other than that, we have a good car and the team is clicking.”

In all, Wilkerson has four final round appearances since his last victory, but just making it to finals last year in Houston was an adventure. With ESPN2 broadcasting live during the semifinals and finals, teams worked through tighter turnaround times. That presented a strong challenge to Wilkerson, who qualified second, and his young team, but with a little assistance they came through in that regard.

The only down note was falling to Pedregon in the finals as the two-time world champion won for the third time in Houston.

“As soon as I heard about (the tighter turnaround times) I said ‘Well, I guess that guarantees that we’ll be in the final’ because our young crew was still really inexperienced at the time and I didn’t think there was any way we could make it,” Wilkerson said.

“Sure enough, we really ran great there and went right to the final. Fortunately, the entire (Funny Car driver Bob) Tasca team was waiting for us in our pit when we got back after winning our semifinal, and without them I’m not sure we could’ve done it. I wanted to win that one so bad for my guys, who really worked their butts off all weekend and all day on Sunday. I wish it would’ve worked out.”

That’s been a sentiment Wilkerson has felt far too often since winning in Seattle in 2011, but he remains as dangerous as anyone in the ultra-competitive class. After advancing to the final foursome at the NHRA Four-Wide Nationals in Charlotte, Wilkerson jumped to eighth in points and he has been a top-10 finisher in Funny Car for the past six seasons. Wilkerson has also been successful in Houston, winning the event in 2004. 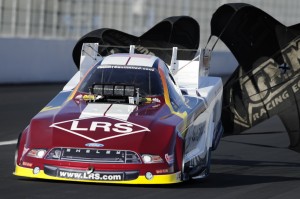 “I’m not sure why we run well there, because it’s a really unique place,” Wilkerson said. “You’re at sea level, so there’s a ton of air, but you’re also right off the Gulf of Mexico, so the humidity is through the roof usually. It’s normally pretty hot and we always run well on hot tracks, so maybe it’s the combination of the air being tricky and the sun baking the track and we just find a way to handle it.”

Handling the impressive number of championship contenders in Funny Car is just as difficult. Points leader Robert Hight is red-hot after picking up his second win and fourth final round appearance of the season in Charlotte, while teammate and 16-time Funny Car world champ John Force’s seven wins in Houston are the most for any driver.

Other favorites include Ron Capps, Matt Hagan, Tony Pedregon, Del Worsham, Jack Beckman and Tommy Johnson Jr., but Wilkerson is as focused as ever to return to the win column.

“We haven’t won a race since 2011, but we’ve been in a bunch of final rounds and we’ve lost too many of them by being safe by just trying to get down the track,” Wilkerson said. “It stinks to have the chance and not seal the deal, but I’m really proud of my guys and we took some huge strides (in Charlotte). We’re better than we were at the last race, and we feel like we’ve got a shot to win any weekend now.”

Bob Vandergriff (Top Fuel), Cruz Pedregon (Funny Car) and Jason Line (Pro Stock) were last year’s winners of the SpringNationals event at one of the circuit’s quickest and fastest tracks. The event, the sixth of 24 during the 2014 NHRA Mello Yello Drag Racing Series season, will once again be televised on ESPN2.