Aaron Wells from Oklahoma City, Okla., earned the Precision Turbo Pro Mod victory with his ’67 Shelby Sunday night at The Strip at Las Vegas Motor Speedway in the finals of the COMP Cams Street Car Super Nationals 15 Presented by FuelTech. The No. 5 qualifier beat Randy Merick with an incredible lap of 5.522 seconds at 266.42 mph over Merick’s 6.005 seconds at 181.54.

Justin Jones, the class top qualifier with a supercharger track record 5.518-second lap Saturday, went out in E2 after a red light & centerline-crossing wheelstand put him on the truck early.

“We knew we had a good race car, we were just chipping away at it,” Wells said with a huge smile from the Winner’s Circle. “It’s the first time in the quarter mile for us in this car and I knew we needed to take it one step at a time and keep working on it. If I just had another pass, we’d turn it up a little more. It’s been a good time. I always say you can’t win from No. 1, so it didn’t scare me not to be No. 1 qualifier.

“To go 266 mph is unreal. I think that puts us in the Top 5 fastest in the quarter mile, so it’s always respectable when you look at the names on that list. “

Wells’ mindset was to get the win and not the record. That being said, he said he left some speed on the track.

“Oh yeah!” he said, laughing. “It’s something like 40 degrees . The temperature dropped pretty hard on us, but we decided it was better to be safe than sorry and slowed it down just a little bit. It definitely had more, but it is what it is and you’ve got to be safe and race smart.”

In Crower Radial vs. The World action, Odessa, Texas’ Ronnie Hobbs crushed the competition the entire weekend. Whether it was his class-leading ETs and speed of 3.734 seconds at 208.71 mph or his dominating round wins throughout the weekend, Hobbs put his ’17 Mustang through its paces. 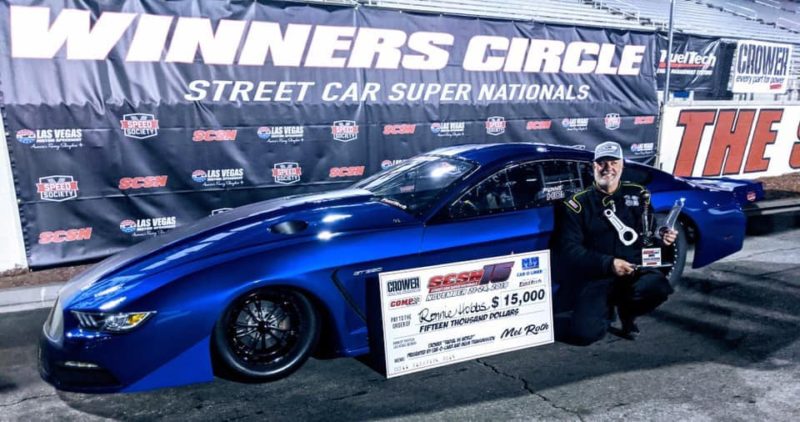 The RvW battle of the weekend took place in Sunday’s semi-finals between Hobbs and Mark Woodruff, a former SCSN winner who dropped a 3.75 in the quarterfinals. Hobbs wasn’t afraid, beating Woodruff with a 3.734-second pass to advance to the finals, where he beat No. 10 qualifier Peter Campbell with a 3.989-second run.

All qualifying and elimination results can be found at SCSN’s official page on Facebook, Facebook.com/StreetCarSuperNationals.