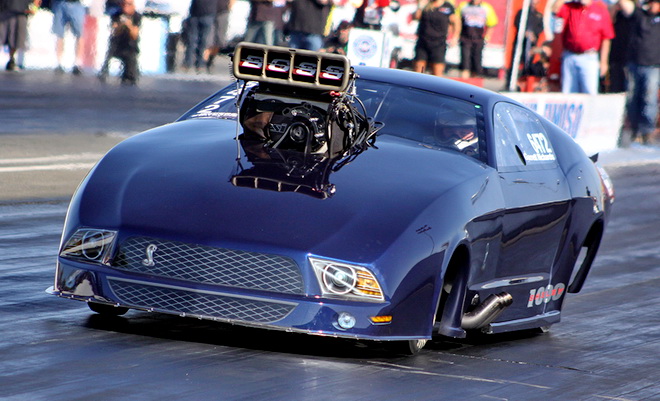 The opening event for the WCOPMA’s 2014 season was also held at Famoso Raceway in the cool month of March a few months back but it will be a different story this weekend as temperatures will be in the low-mid 100 degree range, making the teams have to dig out their summer time tune-ups.

Marc Meadors, the 2013 WCOPMA champion, will be back to action this weekend with the group as he missed the season opening event due to previous arrangements. Current points leader and one of the two only pro mod cars in the world to run a 5.6x pass, Mike Maggio, will be looking to extend his points lead but Rod Burbage is looking to close the 1-2 gap in points by picking up the win this weekend. All the way from Washington will be Garrett Richards (above) and the TPR boys with their sleek screw blown Ford powered Mustang and of course you cannot forget the fan favorite Renteria Brothers with their uniquely cool 5-second 1964 Valiant.

Also making their first WCOPMA event of the 2014 season will be Jay Diedrich who tested last weekend in Bakersfield, Troy Ferry will be making a return to competition with his late-model Dodge Challanger and Justin Wake will be the lone NOS car entered in the event. Rich Roberts is getting his 37 Chevy figured out and will be in attendance as well as John Durden with his roots-blown 1941 Willys and Jeremy Hanger who capped off the season opening event in March with career best numbers dipping into the 5.70-zone.

The action will kick off on Friday with an open test n tune available to all racers from 12-5pm. Saturday there will be three qualifying sessions scheduled for 12, 2pm and 4pm. Sunday will host the 8-car qualified field of elimination rounds starting at 1pm.

There will be results posted throughout the weekend on our website www.WestCoastOutlawProMods.com and on our association Facebook page