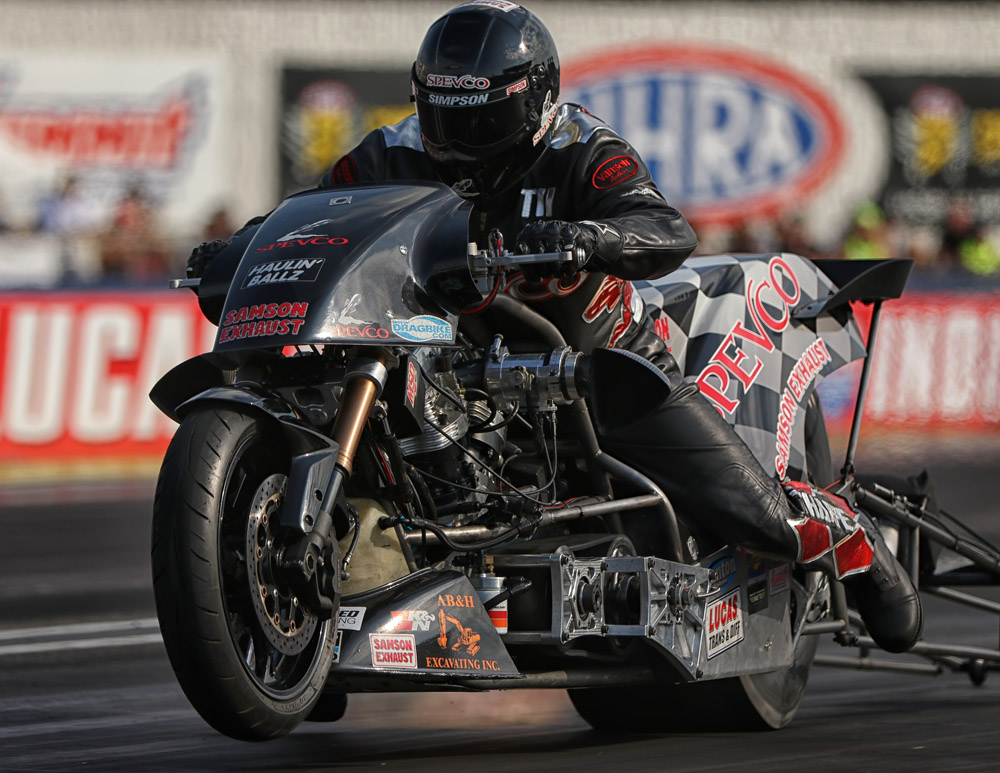 It was déja vu all over again for NHRA Top Fuel Harley (TFH) champion Tii Thape, as he was once again racing down to the wire with last year’s championship rival Doug Vancil at the U.S. Nationals at Lucas Oil Raceway.

But two things were different this time around—Tharpe had the points lead by slightly more than one round, and his Spevco/Jay Turner Racing (JTR) bike was carrying the colors of associate sponsor Samson Exhaust along with the hopes of Samson president Mike Baverstock.

That meant a direct battle between Samson and Vancil’s sponsor Vance & Hines—both major players in the performance exhaust business. And near the bottom of this article, you can find significant savings when you order pipes direct from Samson Exhaust.

“The championship race was so close coming into the weekend that my nerves were playing on me!” admitted Baverstock.

It wasn’t just the closeness of the championship race that worked on Baverstock’s (and everybody else’s) nerves, it was also the event’s drawn-out schedule.

Two days of qualifying were promising, with Tharpe’s 6.26 third in the order ahead of Vancil’s 6.28, but behind number one Randal Andras’ 6.15 and Bob Malloy’s 6.21. “I have plenty of faith in our team’s ability to qualify, but each round got more nerve wracking as I knew the time to deliver was coming closer and closer,” said Baverstock.

Then rain on Sunday threw the schedule into disarray. Round 1 of TFH eliminations ran on late Sunday afternoon, but round 2 wasn’t finally put on the track by NHRA until some 24 hours later after pro eliminations were complete on Monday—after the round was scheduled and delayed three separate times. Tension was high!

Tharpe and Vancil both advanced out of E1, Vancil by virtue of a holeshot over former Tharpe teammate Mike Scott and Tharpe with a win over Kevin Boyer. Then came the wait.

“That 24 hours was totally brutal!” said Baverstock. “I wasn’t wanting to sleep. At 2, 2:30 in the morning I’m out of the RV walking the puppies in my boxers. I don’t think I slept 45 minutes during the night because I was so worked up over the championship.”

Baverstock’s puppies are Old English Bulldogs, named Remi and Ragnar. “Interesting thing about that is that there was a character named Ragnar on the TV show ‘Vikings,’ along with Lagertha,” said Baverstock. “And Lagertha is the name of Tii’s bike. It’s completely an accident that it ended up that way.”

That would be the same bike that was waiting for NHRA to schedule it’s round 2 match-up with the bike of Rickey “Sharkey” House—the match-up that would determine if Tharpe’s points lead was enough for the championship, the match-up that was keeping Baverstock awake all night and wandering Lucas Oil Raceway in his boxers. “At no time did I lose faith that we were gonna win it, but it’s not sealed until the race is done.”

“All my nerves just went calm,” Baverstock said about the winlight coming on in the Samson bike’s lane. “I’ve had to wipe sweat off of me many times leaving the starting line after a race, but that’s the first time I’ve ever had to wipe away tears. I felt this was possible, but I’ve never been involved in a championship and it just meant so much to me.”

The other semifinal saw Tharpe’s JTR teammate Andras racing Vancil. Randal also started the race behind—only down .007 at the tree, but a full .030 slower to the 60 foot. Just like the Spevco/Samson bike, Randal’s mount made up ground through the middle of the track and put Vancil out.

With the championship already decided, Andras had everything to race for and made his first NHRA win a big one at The Big Go. From his .034 light to the finishline, Andras never trailed Tharpe and took the winlight.

“I’m just ecstatic about the championship for our bike, but I’m also really happy for Randal,” said Baverstock. “There is zero disappointment there. That whole Jay Turner Racing team is like family. They all really care for each other and I couldn’t have chosen better partners. I felt like I was joining up with a group of successful people when I entered this deal with Tii Tharpe, Spevco, and Jay Turner Racing—and I guess I was right!

“Tii’s one of the best—maybe THE best—out there. But the Romines (Mike, Jack and Patty) clearly have a great program there with Doug, and Vancil is a fierce competitor. You have to be concerned because they’re good, they’re REALLY good.

“Obviously, Vance & Hines wanted to see the team they back win. Samson is a smaller company, but we’re punching above our heads and growing our market share. This championship is just an absolutely fantastic thing for me and Samson.”

Baverstock and his business partner Rick Whipp are rebuilding the Samson brand after purchasing the company literally on the eve of the liquidation auction, November 7, 2017. The partners had a long history in the class 8, commercial exhaust business, and Baverstock had immediately put Samson pipes on his very first Harley back in 2001. So his bike has run Samson exhausts for 18 years, and now Baverstock actually RUNS Samson Exhaust.

Samson also put some money up for the whole class at the U.S. Nationals, and Samson stickers were on most of the bikes in the Indy field, but especially that of the TFH champion.

“We’re proving that Samson is the real deal and we’re here to stay,” said Baverstock, whose “Loud Pipes Win Races” attitude is translating from strip to street with top quality, American-made, aftermarket exhaust for Harleys and select Indian motorcycles at an affordable price. 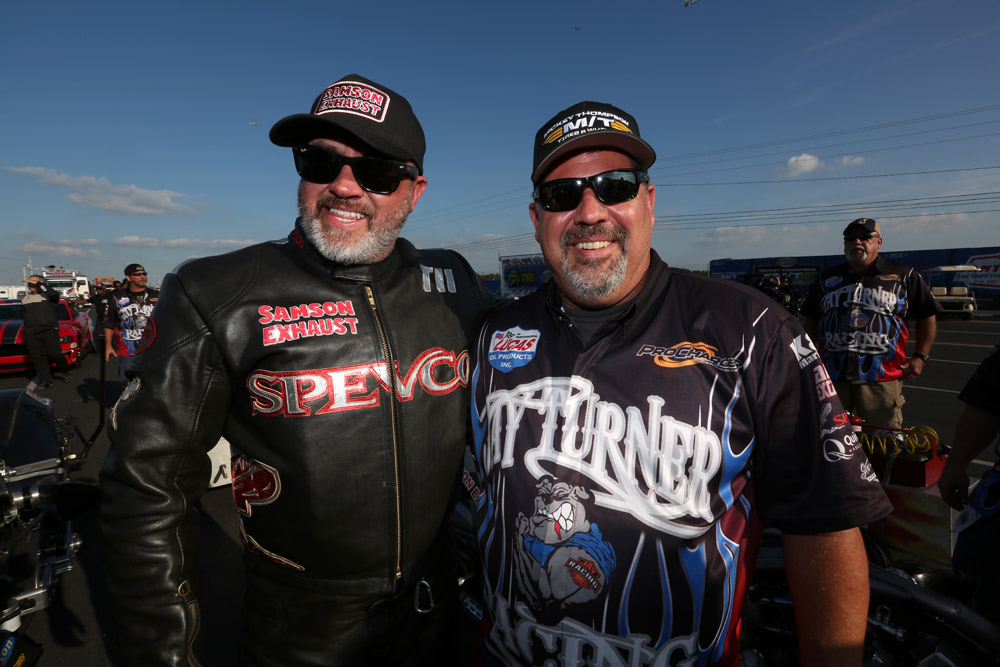 “I’d especially like to thank my business partner Rick. He’s not into motorsports as much as I am, but he supports this effort all the way. I’d like to thank Spevco for partnering with us—they’ve been absolutely perfect. And Jay Turner Racing—they’ve welcomed me with open arms and gone above and beyond for me. Rex Harris does the tuning and Benny Knott works on the bike. And last but not least is Tii Tharpe for the killer job he does riding that monster. Tii’s not only the champion that my company helps sponsor, he’s also turned into a good friend.”

“Mike’s a great guy, and I want to thank him and everyone at Samson,” said Tharpe, who also thanked everyone with Jay Turner Racing and all the employees of Spevco.

There’s only so much basking in the afterglow for Baverstock, who said “It seems like business doesn’t stop.”