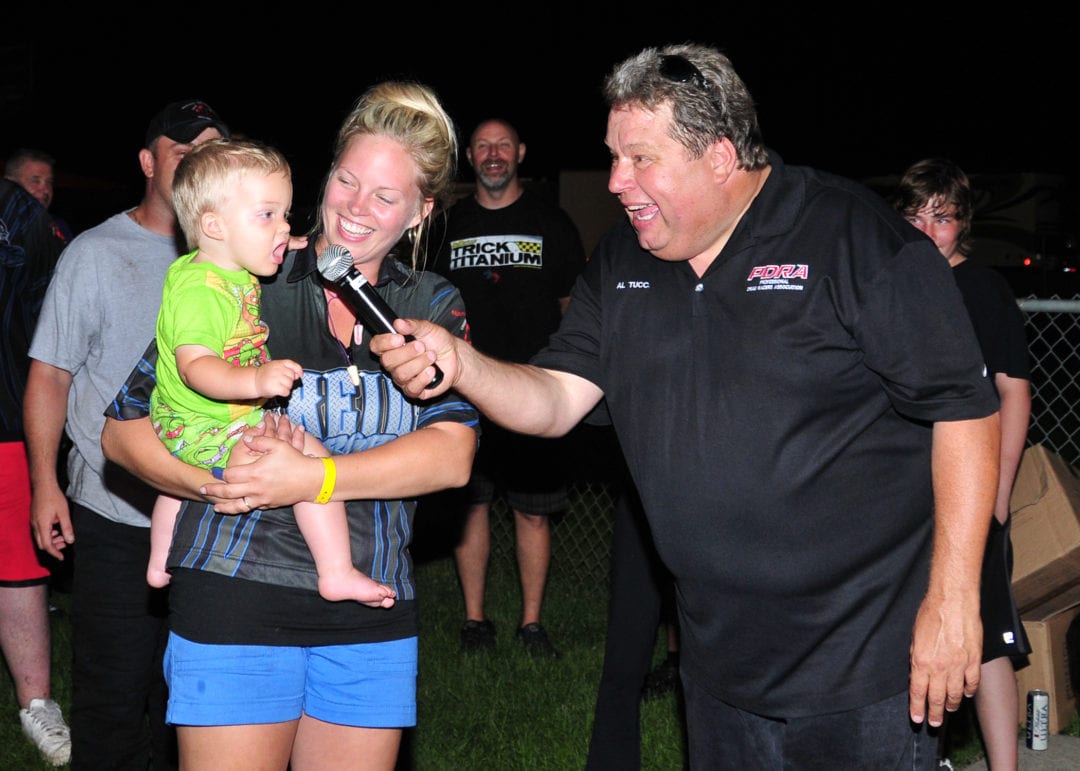 “My goal my whole life has been to make people happy, even before drag racing. No matter where I’ve worked, that was my goal.” 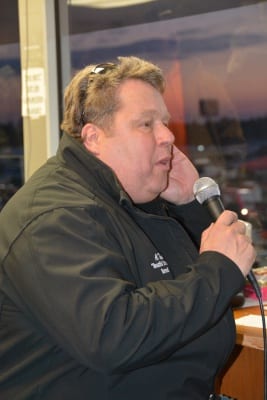 One of the most often overlooked aspects of drag racing is the role of announcer. But when Al Tucci is behind the mic, he’s fairly impossible to ignore. His out-of-the-box, unfiltered style commentates the stars of the show with ease and a large emphasis on comedic entertainment. But he will just as regularly cast light on unsuspecting bystanders – be they fans, crew members, sponsors, or even hairy, four legged racing enthusiasts. He’s known everywhere simply as “Tucci” and, while admittedly disliked by some, beloved by many more.

He was born an entertainer and discovered his craft at a young age. “When I was 14 years old I imitated Elvis Presley. I loved him. At the time I worked as a busboy, washing dishes for two connected restaurants – a coffee shop and a fancy dinner club. People would come into the dinner club and ask for the busboy. I’d get up on the table and imitate Elvis Presley, dance and sing the songs. I’d walk out with probably about 10 bucks in change,” Tucci laughed.

Tucci’s inner entertainer shares equal space amongst his passion for fast cars. The two passions met a happy marriage in commentating for motorsports. It began in 1987 with motocross, tractor pulling, and even some monster truck events, but drag racing was always Tucci’s first love. Now, nearly 30 years into it, he’s one of the most sought-after announcers in the business. He’s storied events throughout the U.S, in Canada, and across the pond in Sweden.

“This is a stressful sport because of funding, traveling, trying to be the best you can be,” told the Chicago native. “You go there to win. I think my style of announcing relaxes people. I have people come up to me and say, ‘I can’t believe what you said. You had me laughing so hard.’ I have to ask, ‘What’d I say?’ because I don’t even remember half the time. It’s not always rated PG, but coming up with stuff off the top of my head is my gift. People will tell me I made their weekend. And that makes me happy.”

Tucci’s “not always PG” style is part of what endears him to people, but, at times, it’s also gotten him reprimanded. “I announced at the NMCA back when it first started, and then they sold it to Peterson Publishing and the management changed, like corporate America. It was hard for me because I was used to being with the gear heads around the track. I remember announcing a big NMCA race in Memphis in ‘95 or ‘96. I was up there and we were giving t-shirts away. All the corporate people were there in the tower. Two people come up to the tower, two really good-looking people, a guy and a gal. They answer the question and win the shirt. I ask them their names. They answer Bob Smith and Margaret Smith. I say, ‘Oh you guys married?’ The guy goes, ‘No. We’re brother and sister.’ And right when he says that I say, ‘Yeah, you married? We’re in Tennessee?’ The dude cracked this big smile. When they walked off the lady from Peterson Publishing said, ‘What did you say to them?’

“There’s been times I’ve been reprimanded. I can’t control it sometimes. You can’t change me. I’ve got to be who I am. Some people don’t like me and that doesn’t bother me. Sometimes it hurts, but I don’t go to work the next week thinking about it. I just go on doing my thing, being who I am with people who appreciate what I bring to the sport.

“I could be one of those guys that could tell you about the cars, the blowers. I know a lot of that stuff,” told Tucci, who grew up in his father’s garage. “I bring that up in certain aspects of my announcing, but I’m not going to be your technical guy. I really just want to have a good time.”

As much as he loves announcing and drag racing, for Tucci life is about family more than anything else, thanking his wife who keeps him grounded and marveling at his kids. His only regret at becoming a world-class announcer is the time spent away from home. But family is also the place Tucci got his start in racing. 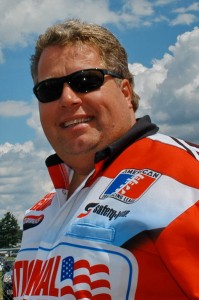 “My dad had fast cars when I was a kid,” Tucci told. “I hung out in the garage. He was my hero. I always wanted to be like dad. I’d go to the drag strip with him and I’d listen to the announcers and I could remember my dad – this is no lie, and this is before I ever had a thought about being an announce
r – he’s towing the car home and he asked me, ‘Hey did you listen to the announcer?’ I say yeah and he asks, ‘Did he say anything about me? Did he say my name?’ I’ll never forget that. It still rings in my head. Did he say my name? And I say, ‘Yeah, he said Joe Tucci from Libertyville.’ And he smiles and he goes, ‘Cool.’

“If you ever listen to me announce, you see how I incorporate everybody? I’ll incorporate your dog, your kids. I think it comes from being that kid, driving home and my dad asking me that question. Did he say my name? When he said that to me, I locked it in.”

That pivotal moment birthed many chapters of drag racing memories as told through the voice of Al Tucci.

With Tucci, what you see is what you get and for many that means a lifelong friendship. His sincerity and caring nature builds relationships easily with racers from all walks of life. Tucci is determined to make every person at the track feel good about being there, regardless of his or her status or stats. “I’m living my passion,” he says with heartfelt emotion. “That’s exactly what I do when I’m up there – live my passion.

This story originally appeared in Drag Illustrated Issue No. 114, the Technology Issue, in October of 2016.