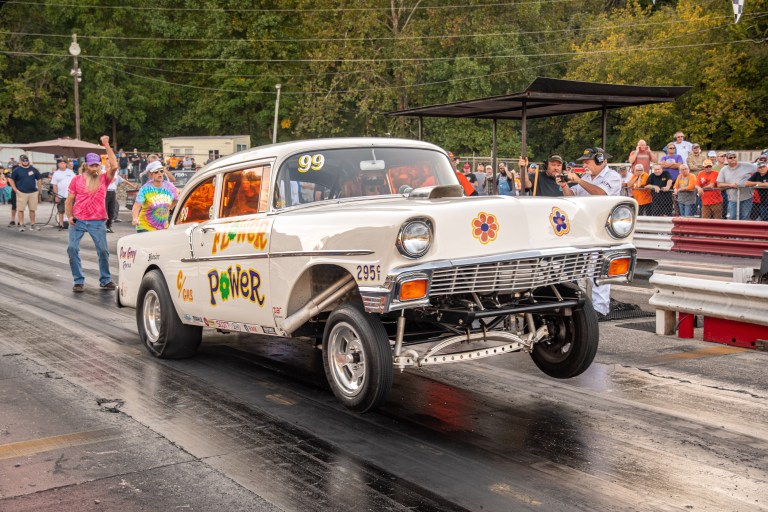 Whether they’re in the lanes, in the pits, or on the strip, gassers are just plain cool — and the people who have devoted their lives to this unique corner of drag racing are some of the best you’ll ever meet. This week, the Southeast Gassers Association (SEGA) community is saying goodbye to one of their own after Cynthia Phillips lost a tough battle with cancer on April 19, 2021.

[Editor’s Note: This story was originally published on WinLightNews.com. It’s republished here with permission from the author, Kelly Wade.]

The collective grief is palpable as the SEGA family has lost their First Lady and a very worthy competitor.

Where it began
Phillips began dating drag racer Quain Stott in 1985, and she was with Stott through the various stages of his racing career, from Pro Mod and deep into the gasser scene. Phillips, who was just 17 when she entered the racing world, took a very active role from early on. She helped with maintenance on Stott’s cars in the pits, learned to read the racetrack better than most, and showed composure in front of the crowd as Stott’s steady back-up girl.

The North Carolina resident was an integral part of the SEGA family from the earliest days, working alongside Stott as he founded the Southeast Gassers Association with the idea of representing drag racing as it was in the 1960s. The league promises and delivers on a truly spectacular show that takes fans right back in time to the days of wheels-up launches, gear bangin’ 4-speeds, and racer pits that rival the baddest car shows in the land.

In 2017, Phillips expressed an interest in driving a gasser of her own, and a new page in her own racing history was written. Phillips was hands-on for the build of her first racecar, from the bodywork to the engine. Her most recent gasser was the Flower Power ’56 Chevy, and when she stepped out of the seat last year, she handed over the reins to her niece, Alexis Phillips.

Our hearts go out to all who knew and loved this extraordinary woman.

See Phillips in action on the drag strip
Here’s Cynthia Phillips making a pass in her 4-speed gasser at a private test session (video was posted in March 2020). Watch this: