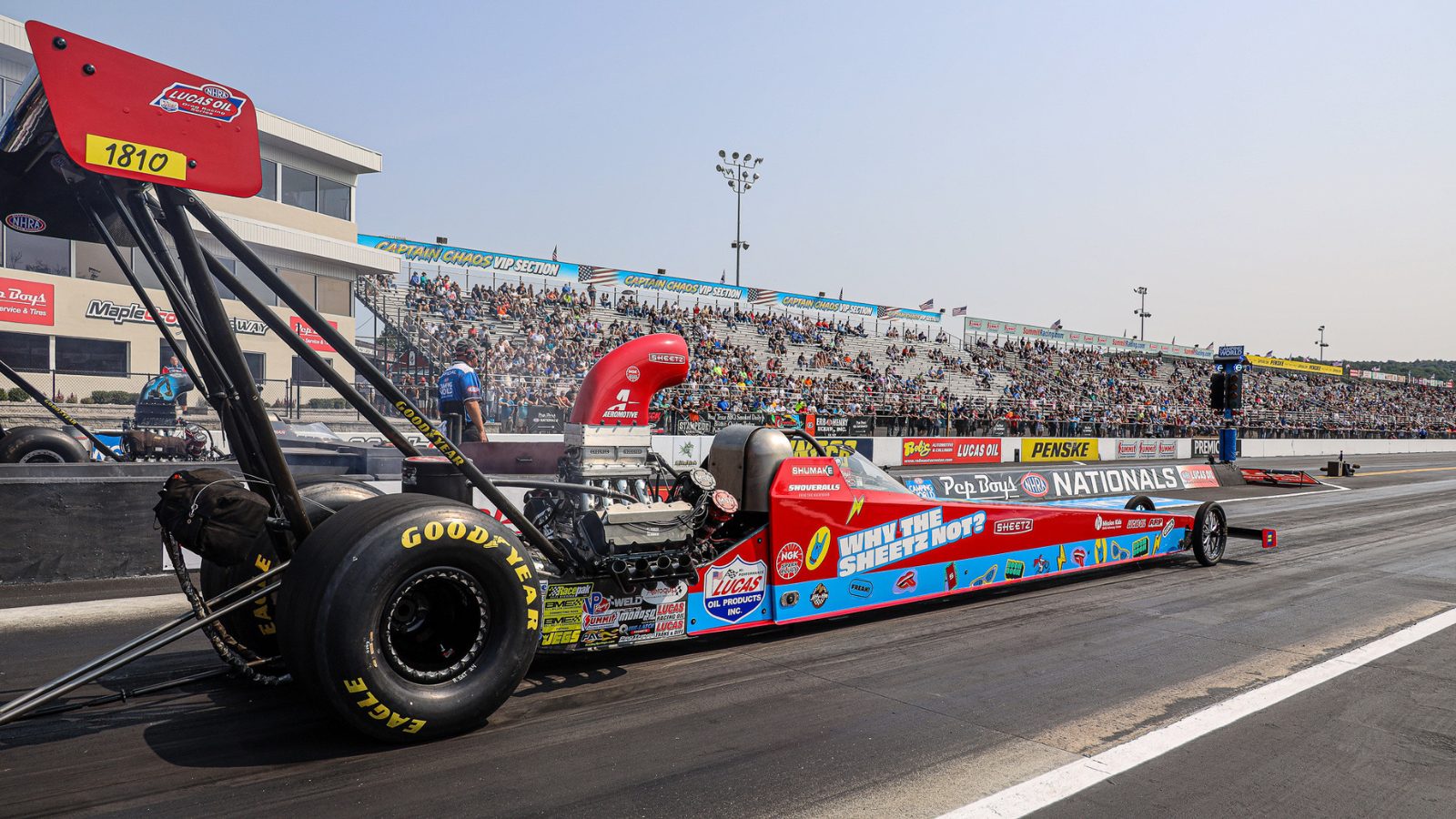 “I learned so much this weekend,” said Shumake, at the end of the day. “I learned what it’s like to red-light. Sometimes your brain, emotions, and right foot aren’t on the same page. I got really wrapped up in my head going into that semifinal round. As a fan you watch and say, “It so easy to not red light, you just don’t go until the ambers flash” and then you’re in the car and you just…go. Whoops.”

In the first round contested yesterday afternoon Shumake upset No. 5 qualifier and former World Champion Duane Shields with a hole shot win. Shumake took a .049 to .109 second starting line advantage in the Sheetz branded dragster that pushed him to the next round with a winning time of 5.280 seconds, a career quickest run, and a major improvement from his quickest qualifying time of 5.462 seconds.

As the sun dropped yesterday evening Shumake was once again on the hunt for an upset and the son of Funny Car standout Tripp Shumake delivered with another hole shot win taking out No. 2 qualifier Jackie Fricke. Shumake hit the throttle with a .029 reaction time which propelled him in front of Fricke’s .113 second reaction time. As both dragsters flew down the track Shumake’s time of 5.282 seconds combined with his reaction time advantage was enough to beat Fricke’s quicker 5.259 second run at 275.90 mph.

Today, after a night to reflect on his success Shumake faced Jeff Veale, the No. 9 qualifier, in his first semifinal appearance. The run proved to be a pivotal moment for the rookie driver as he jumped the start with a red-light start and handed the win to Veale. For Shumake the entire weekend was a huge learning experience and one that he feels will pay dividends as his career progresses.

“I shut off at about 800 feet because I knew I redlit and I was processing how that all worked,” said Shumake. “Randy joked about wishing I ran it through the lights just to test the tune-up we had. We were ready for a tight race. We packed that same tune-up in the trailer, and I can’t wait to roll it out Friday morning in Charlotte. These Randy Meyer cars are showing some great consistency in the back half of the year and five days from now we get to do it again.”

Shumake was racing the first of two NHRA national events representing Sheetz, a customer-centric destination for more than gas and snacks which is open 24/7/365, in the Top Alcohol Dragster class. In five days Shumake and the Randy Meyers team will be back in action at zMax Dragway outside of Charlotte, North Carolina. The marketing relationship with Sheetz was a hit throughout the weekend in front of a packed Maple Grove Raceway crowd.

“The Sheetz fans are everywhere,” said Shumake. “I loved meeting the “Sheetz Freakz” as they self-identity out at the track. If I had a dollar for every person who stopped and said ‘No way, I love Sheetz. I didn’t know they had a dragster!’ I would have paid for the weekend. Fellow competitors agree that Sheetz is the kind of sponsor we need more of in the sport. A place where our 30 million fans can instantly show their loyalty and appreciation with a gallon of gas or a milkshake.”