Roger Holder simply wanted to race, even if it meant flying across the country on back-to-back weeks during some unprecedented times.

Pandemic or not, Holder was determined to find his way to Woostock and then last weekend’s COVID-8 to campaign his turbocharged Nova.

Of course, it all paid off with a victory in the hotly-contested Pro 275 class last weekend in Orlando, which proved to be a very nice cherry on top after a wild couple weeks for the Bakersfield, Calif. native.

“To race with that caliber of racers and come out on top is pretty incredible,” Holder said. “On the West Coast, we don’t have that competition out here. To travel there and just compete at that level, it’s pretty substantial. I feel like we’ve done a good job as a team, so to get that win, it was just great.”

Guys on Holder’s team drove his race hauler to Darlington, flew home and then everyone flew to Woostock, where Holder competed in Lance Stanford’s Carolina N/T Small Tire Racing. It was a familiar spot for Holder, who race in the N/T scene for a number of years.

He used Woostock as a test and Holder figured, “once the boards lit up, we’ll see if we can do any good.”

He flew back to California, then back east a few days later, landing in Orlando with a sense that he could do some damage. In between races, he worked with Mark Menscer on a new shock set-up, hoping it would help against a Pro 275 class that continues to improve at a rapid rate – both in performance and participation.

The initial results weren’t ideal, but things quickly came around.

“He thought this would be a better combo, so we made the change,” Holder said. “The first two passes, we shook the tires. The problem we have is we can’t test out here, but we knew we would get seven qualifiers so we thought we could figure it out.

“By the third round, we had rattled one of the wires during one of the previous runs, so the car didn’t fire. But the fourth qualifier, we made a good hit and from that point we kept it consistent and just tried to go faster each time.”

By Friday night, Holder was rolling. He qualified second with a run of 3.856-seconds at 206.89 mph, with only Mark Micke’s record-breaking run of 3.822 topping him.

Holder and Ziff Hudson did make history, though, as their qualifying run — where Holder went his 3.856 and Hudson went 3.860 – marked the quickest side-by-side pass in the history of Pro 275.

It was another landmark moment in a class that has continued its ascent at a meteoric rate.

Holder wasn’t done, though. He rolled through the three rounds of eliminations with three runs in the 3.80s, including a 3.864 in the semifinals and a blistering 3.860 at 206.42 to top Hudson in the final round.

It made for a memorable moment for Holder – and all the cross-country trips worth it.

“That was really cool. This class has just taken off,” Holder said. “All 16 cars there were good enough to win the race. Any one of them was fast enough. The top eight weren’t separated by much, so if you were asleep on the starting line or slipped up any you were going to get outrun.”

The victory has Holder excited for what’s next, even if next likely won’t be racing Pro 275 until the fall. That means another cross-country trip for the Sweet 16 and No Mercy 11, which take place during back-to-back weeks in October, but Holder is anxious for it to happen.

While it wasn’t perfect conditions, Holder was quick and consistent in Orlando, leaving him confident he could enjoy more success in October, even as Pro 275 continues to raise the bar.

“Anytime you win, it gives you that excitement to get ready for the next race,” Holder said. 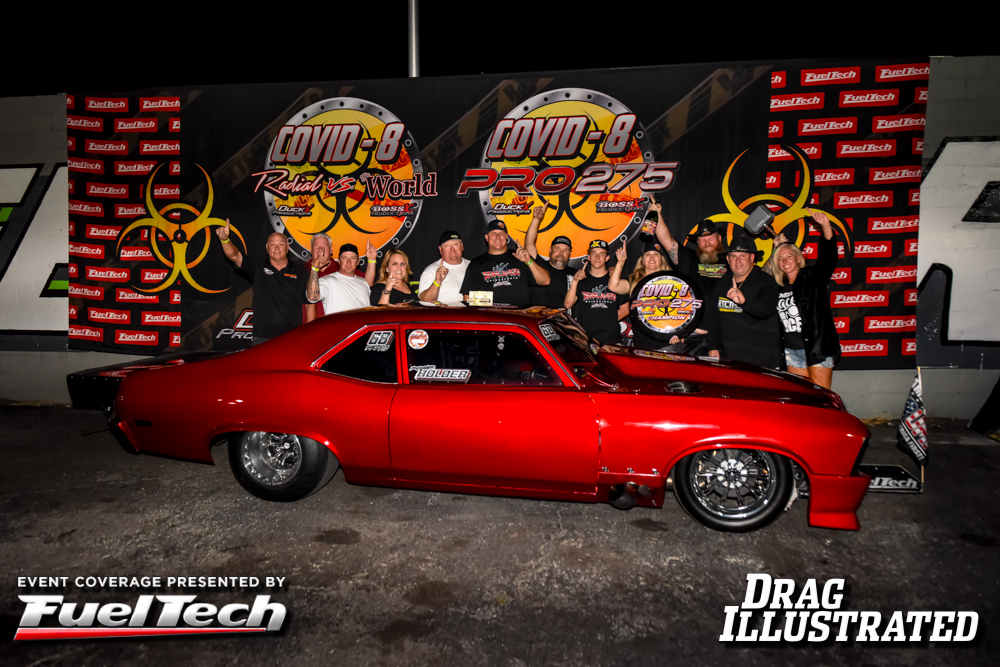