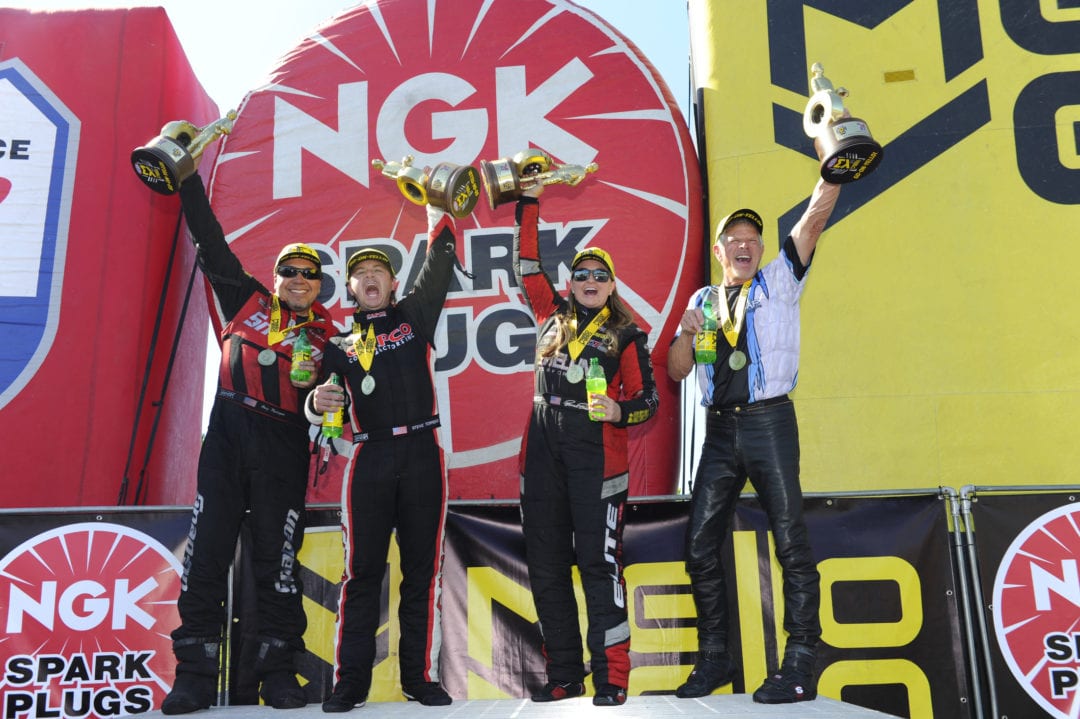 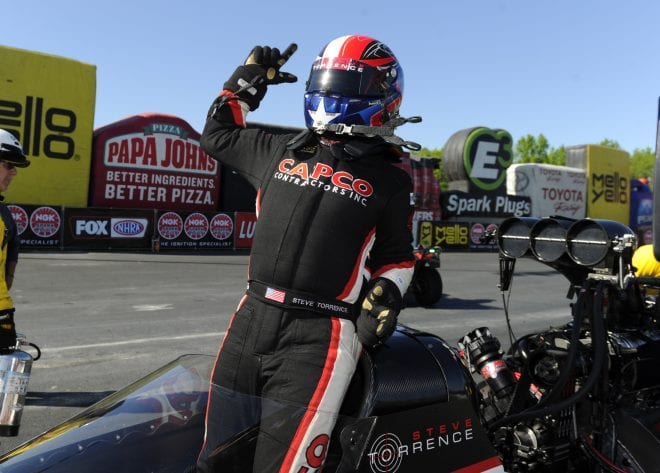 Torrence piloted his Capco Contractors dragster to a 3.813-second pass at 326.56 mph as he became the first driver to reach three victories on the season. He defeated Doug Kalitta, Terry McMillen and Clay Millican in the final round for his 19th career win and second at zMAX Dragway.

With the victory, Torrence moves back into sole possession of the Top Fuel points lead after entering Charlotte in a first-place tie with Tony Schumacher, who was eliminated in the first round.

Pedregon ran a 4.059 at 310.84 in his Snap-On Tools Toyota Camry for his 36th career victory and first since Englishtown 2014. After qualifying sixth for the event, he was able to knock off 16-time Funny Car world champion John Force, Tommy Johnson Jr. and No. 1 qualifier Courtney Force in the final round to earn the victory.

“I knew we had our work cut out for us when I pulled up to the starting line in the finals, and I actually didn’t believe my ears when my team manager told me that I won,” Pedregon said. “It was surreal, and I cannot believe that I won this race.”

This was Pedregon’s 36th career Funny Car win, moving him past the legendary Don Prudhomme into sole possession of fifth place for all-time in Funny Car victories.

In Pro Stock, Enders picked up her 23rd career victory and second win in Charlotte with a 6.535 at 212.73 in her Melling Performance/Elite Motorsports Chevrolet Camaro. She took down Vincent Nobile, Chris McGaha and No. 1 qualifier Drew Skillman in the final round to lock down her first victory since Epping in 2017.

“In my opinion I have the best team in all of motorsports, so I am really lucky to be their driver,” Enders said. “We made a car change going into our home race in Houston last week and we made it to the finals, so we came into this race with some confidence and this is definitely a special victory for me.”

Jerry Savoie emerged victorious in the Pro Stock Motorcycle class, as he earned his ninth career victory and first at zMAX Dragway when he ran a 6.784 at 195.73 on his White Alligator Racing Suzuki in the final round. He bested Andrew Hines, Scotty Pollacheck and Matt Smith in the final round to lock down his first victory since Brainerd last season.

“We struggled all weekend, but my team worked really hard to get things right so we went out and gave it all we got and figured some things out,” Savoie said. “My reaction times on this bike are traditionally not great, but I was able to do pretty well today and we had the power on this bike to get a win.”

The 2018 NHRA Mello Yello Drag Racing Series season continues with the NHRA Southern Nationals Powered by Mello Yello at Atlanta Dragway in Atlanta, Georgia from May 4-6.