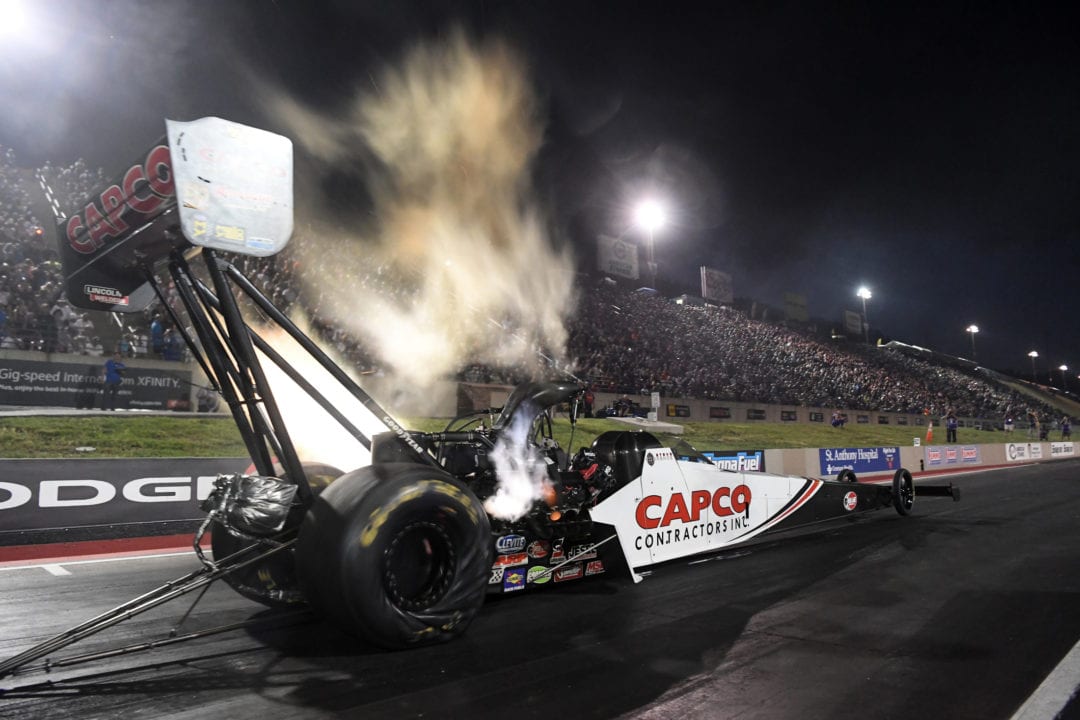 Steve Torrence continued his dominant pace on Saturday, powering to the No. 1 qualifying position in Top Fuel during the 40th annual Dodge Mile-High NHRA Nationals presented by Pennzoil at Bandimere Speedway.

Torrence, the defending world champ and current points leader in the class, went 3.738-seconds at 328.78 mph in his Capco Contractors dragster to claim the No. 1 qualifier for the third time this season and 22nd time in his career. After making the second-quickest run in track history on that run and setting the track speed record on Friday, Torrence will race for his eighth win in the past nine races on Sunday. Defending event winner Leah Pritchett qualified second with a 3.761 at 315.19 and Jordan Vandergriff was third following his 3.796 at 321.27.

“We ran well the last three sessions, so the confidence in the car was there for sure,” Torrence said. “I knew the numbers were out there and I’ve got a lot of faith in my team. We just need to go out here and do the best we can on the first race of the three-race Western Swing. To make full pulls consistently, it’s been huge and it’s a big part of our success.”

Funny Car points leader Hight earned his seventh No. 1 qualifier of 2019 and 67th in his career after his pass of 3.976 at 326.16 during the final qualifying session in his Auto Club Chevrolet Camaro SS. Hight will try for his fifth career win at Bandimere Speedway as John Force Racing qualified No. 1 in Denver for the sixth straight year. Tommy Johnson Jr. will start eliminations in second after his 3.978 at 317.72, while Cruz Pedregon is third with a 4.002 at 317.42.

“We came in here testing some stuff and the two runs (on Friday) we were testing stuff didn’t go well,” Hight said. “You have to throw that out, and I’m glad NHRA and the fans stuck this out so we could make another run. You don’t want to into raceday not getting down the track, so that was big for us. We’ve had a lot of good luck up here.”

Pro Stock’s Freeman raced to his first career No. 1 qualifier in the class after going 6.948 at 197.33 in his Elite Motorsports Chevrolet Camaro. Freeman, the Elite Motorsports team owner, became the 65th different driver to claim a No. 1 spot in the class and will face Joey Grose in the first round of eliminations. Jeg Coughlin Jr. was second with a 6.953 at 197.51 and Matt Hartford is third after running 6.954 at 196.93.

“It’s really neat,” Freeman said. “I’ve always got to stand behind the cars and enjoy that, but we’re super excited. It’s great. It’s exciting and I can’t say enough about our program and the guys we have back there, and the other drivers. It’s been awesome. I think we’re going to be good (on Sunday), so hopefully we come out of here with a win.”

In Pro Stock Motorcycle, defending world champion Smith went to the top spot with his run of 7.132 at 188.31 on his Denso/Stockseth/MSR EBR. It is the second No. 1 qualifier of 2019 for Smith and the 33rd in his career. Smith will face Jim Underdahl in the opening round of eliminations and is seeking his third Denver win. Jerry Savoie qualified second after going 7.197 at 183.84 and Angie Smith is third after a 7.203 at 185.18.

“I didn’t expect to run that fast,” Matt Smith said. “When I saw Angie go (7.20), I thought I could maybe go a .17 or .16. The track tightened up and, man, my combination just stuck. That’s the quickest and fastest I’ve ever been up here and I just can’t say enough about my team. We just have to take it one round at a time and let this bike do its work.”