Randell Reid (above) leapfrogged from 10th to first place in the second and final round of Pro Extreme qualifying for the inaugural Professional Drag Racers Association (PDRA) Texas Nationals at the Texas Motorplex, near Dallas. Two more scheduled rounds of qualifying were lost to persistent rain showers earlier in the weekend. Also qualifying number one in the PDRA pro classes were Tommy Franklin in Pro Nitrous, Anthony DiSomma in Pro Boost and defending Pro Extreme Motorcycle champion Eric McKinney.

The second round of NAS Racing Pro Extreme qualifying also was marred by the violent top-end crash of Gene Hector in his brand-new 2015 Corvette. The car was essentially destroyed in the fiery rollover crash, but Hector emerged unscathed from the wreck. 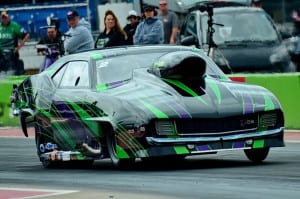 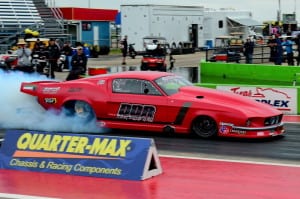 New Jersey’s DiSomma also climbed from 10th to first with a 3.761 at 211.89 in round two, putting his twin-turbocharged ’67 Mustang on top of 19 Precision Turbo Pro Boost entries, with 16 entering eliminations later in the day. Placing second was Kevin Fiscus in another turbocharged Mustang at 3.853 seconds and 209.49 mph. Fiscus got the position courtesy of running a higher speed than both third-place Kevin Rivenbark and Tylor Miller in third, who both posted identical 3.853 elapsed times.

Only five bikes showed up in Texas to contest the Drag 965 Pro Extreme Motorcycle class, with McKinney running a potential 4.008 record time at 178.05 mph on his 2012 Suzuki to pace the all-run field. His teammate, Ashley Owens, placed second at 4.065 and 173.85, followed by Jeff House, Brad McCoy and Mark Rendeluk.

In the PDRA sportsman classes, Wade Pennington ran 3.825 at 191.32 to lead the 16-car Dart Top Dragster field, while in her first race Tricia Musi took the MagnaFuel Top Sportsman pole with a pass of 3.983 seconds at 188.36 mph in her ’09 Dodge Stratus. Finally, Aaron Philpot placed first in Huddleston Performance Pro Jr. Dragster and David Roloff led the way in Huddleston Top Jr. Dragster.