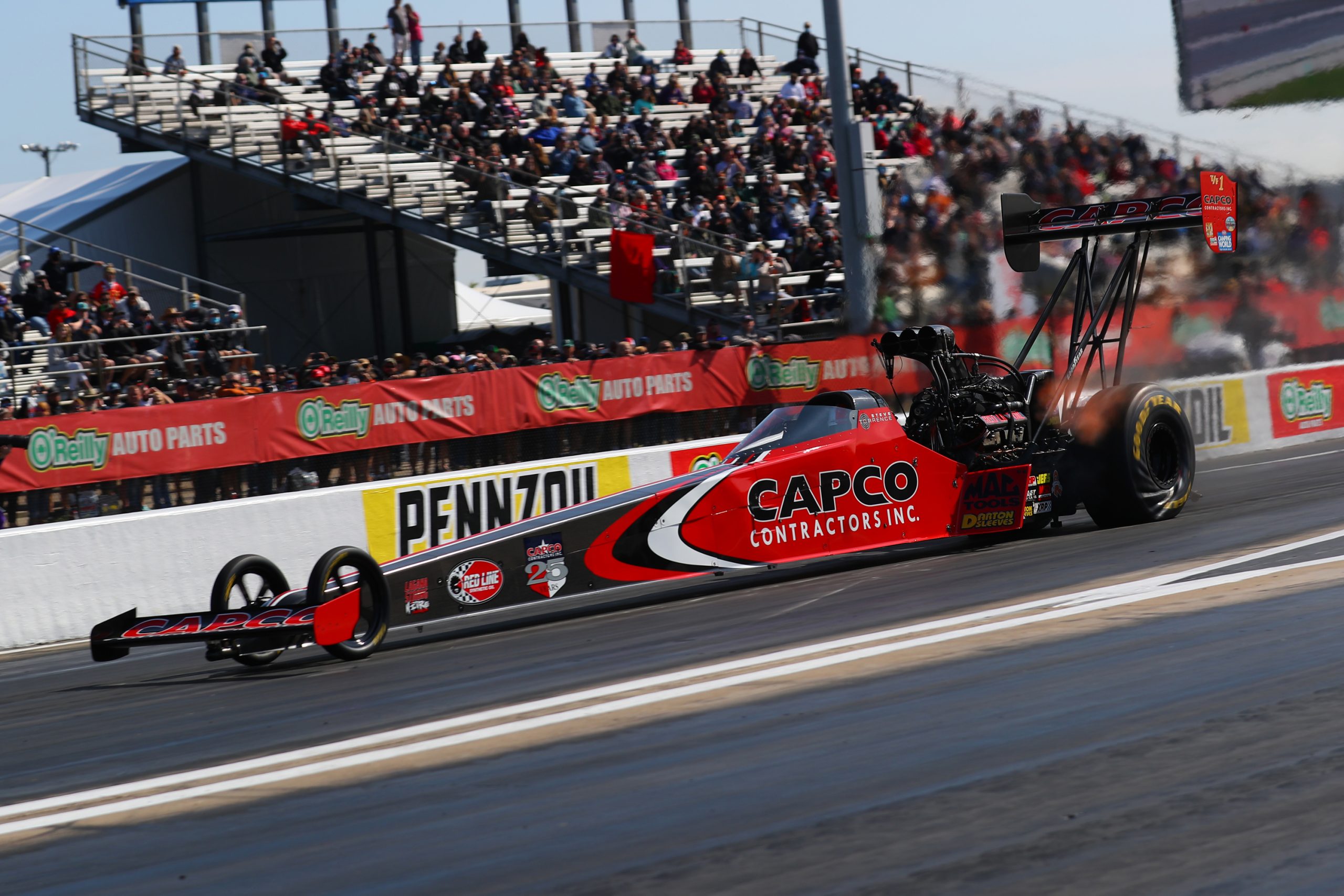 Steve Torrence’s path to an historic third straight NHRA Top Fuel Championship is not a circuitous one. In fact, all the driver of the Capco Contractors dragster must do at this week’s season-ending 20th annual Dodge Finals at The Strip at Las Vegas Motor Speedway is exactly what he’s been doing.

Despite the fact that the Finals will award drivers one-and-a-half times as many points as any other event in the Camping World series, the reality is that if Torrence qualifies third or better on Saturday and wins his first-round match on Sunday, he’ll lock up another championship and once again relegate Doug Kalitta to bridesmaid status.

What’re the odds? Suffice it to say that on a weekend when the Kansas City Chiefs are hosting the hapless and winless New York Jets in pro football, Torrence still is the closest thing you can find to a lock in this town.

After all, over the last four seasons the 37-year-old Texan has qualified either first, second or third in almost 60 percent of the races he’s run (48 of 81). Moreover, he comes into Vegas off back-to-back No. 1 starts at Dallas and Houston. The statistic of greatest significance, however, is that he has advanced out of the first round in 93 of his last 104 starts including eight of nine this year.

That said, few know better than Torrence how little the odds really mean when two 11,000 horsepower race cars are on the starting line.

“Anything can happen in this sport,” acknowledged the 40-time pro tour winner and 2005 Lucas Oil Series Champion (Top Alcohol Dragster). “I’ve learned not to take anything for granted. We still have to dot all the I’s and cross all the T’s. Doug and his guys, they’re not gonna roll over. If we make a mistake, it changes everything.”

It was just three years ago, in fact, that Torrence learned exactly how quickly things can turn. With a category best eight race wins to his credit, driving a car that was performing flawlessly, he arrived at the Texas Motorplex, his home track, with an 83-point lead over Brittany Force. He was on cruise control.

However, everything changed in the second round when, after turning on the win light, he crashed heavily into the concrete guardwall, destroying his car. Driving a backup car, he never recaptured the earlier magic, winning just two rounds thereafter and leaving the door open for Force, who passed him on the season’s final day.

It was a crushing disappointment, but one that fueled a 2018 championship run that included a sweep of the six events in the NHRA’s Countdown to the Championship.

This week, there will be no surprises. Torrence knows what can happen. He knows very well that “it ain’t over ‘til it’s over.”

“We’re going to go out and try to win the race just like we do every week,” he said of his team’s strategy. “I’ve got a great car, a great crew and a great opportunity. These are the moments you live for. You have a chance to do something special, to accomplish something extraordinary as a team and as a family.”

A finalist in three of his last four appearances in the Halloween weekend race (with wins in 2016 and 2018), Torrence comes in having made 12 consecutive runs of 3.72 seconds or less including six straight in the 3.60s.