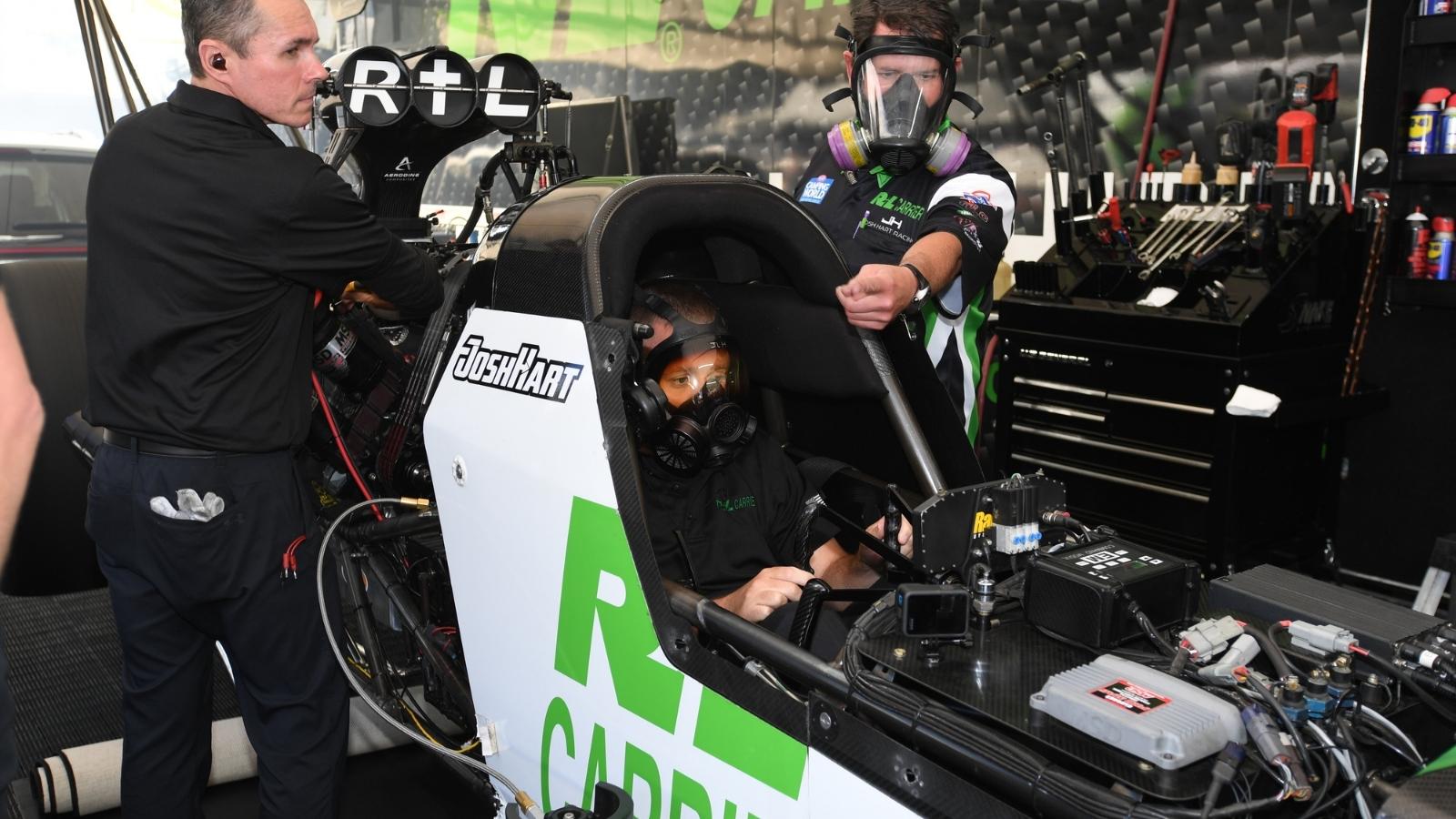 For the last two and a half months Josh Hart and the R+L Carriers Top Fuel dragster have been posting positive performance results at a championship level. They have moved up from eighth place to fifth place in the Camping World Top Fuel point standings and over the past five races they have avoided first round losses advancing to a final round, a semifinal and three quarterfinal finishes. The second-year driver and team owner is positioned to make a hard push to finish in the top four when the regular season concludes following this weekend’s Lucas Oil NHRA Nationals and the U.S. Nationals Labor Day weekend.

“We want to compete and win against the best of the best, which is why we are racing in the Camping World NHRA Drag Racing Series,” said Hart, a two-time Top Fuel national event winner. “Every race we feel like we have a racecar that can qualify at the top of the field and win the race on Sunday. We have come close this season and I know we can get the job done. Our next chance is this weekend in Brainerd which will be another brand-new track for me.”

This season racing on the full NHRA tour for the first time Hart has covered more miles from his homebase in Ocala, Florida, than many of the centrally located teams and drivers cover in multiple seasons. The race in Seattle took him nearly 3,000 miles from Florida and this weekend at Brainerd International Raceway it will be over 1,600 miles from his main business, Burnyzz Speed Shop. The different venues and cities have only motivated Hart to impress new fans and enhance the opportunities for his main sponsor R+L Carriers.

“Every race we are meeting with fans and talking about the great career opportunities R+L Carriers offers across the country,” said Hart. “There several career paths for a wide variety of skill sets and there is on the job training as well. R+L Carriers is a family owned and operated company that I have been blessed to be a part of. The chance to go across the country racing and competing is thanks in large part to R+L Carriers and Technet.”

In Hart’s rookie season last year, the former Top Alcohol Dragster driver showed he has the skill and team to race with the best in the business. Hart captured two Top Fuel wins including a win in Charlotte during the NHRA Countdown and in the off-season Hart made a long-term investment in his team to improve and be able to compete for 22 races this season. With the investment came hurdles as the team broke in a new 11,000 horsepower Top Fuel dragster at the beginning of the season.

“We spent a few races chasing some gremlins and we are still a young team overall,” said Hart. “My crew chief Ron Douglas, who is also my business partner, and I have worked together to really keep everyone positive and moving in the right direction. This is a team sport and I might be the one hitting the throttle, but there are ten guys on the starting line that contributed to every win light this R+L Carriers Top Fuel dragster turns on.”

This weekend’s Lucas Oil NHRA Nationals will feature four qualifying runs leading up to Sunday’s eliminations. The team will utilize each pass to put together the best tune-up for success on race day. The qualifying sessions are also an opportunity to earn qualifying bonus points. As the regular season winds down every point will be critical especially with points and half on the line at the U.S. Nationals.

“We want to come off the hauler on Friday and start posting quick runs. The cooler temperatures will be more favorable in Brainerd for sure,” said Hart. “We want to come out strong and keep the pressure on the other teams to keep up with us. This sport is very unforgiving and you can get behind the eight ball pretty quickly. We are moving the right direction and I can’t wait to get back in my racecar.”

The first round of qualifying will begin on Friday afternoon at Brainerd International Raceway and final eliminations will begin on Sunday at 11 a.m. CT.